The ‘Ichkerization’ crime wave in Ukraine

‘Soon, citizens will agree to any power that will deliver them from the bandits.’

A girl was abducted last month by an unknown person on Independence [Maidan] Square in Kyiv on a Sunday evening. This was reported on the traffic police website: “Kiev. Girl kidnapped, Independence Square. A girl was forced into a car, which fled in the direction of a pedestrian zone. 06/14/2015, 21:40. BMW 5 Series, AK6068CI, dark color. Information of the Kiev State Automobile Inspectorate.” 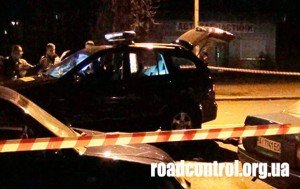 On the same date, a 16-year-old girl was kidnapped in the Ivano-Frankivsk Region, as reported by the press service of the regional administration of the Interior Ministry: “On June 14, around 1:30 am on the road between the villages of Rosokhach and Vinograd in Gorodenkovskii district, an unknown person forced a girl into a VAZ (Lada) car and drove off in an unknown direction. Her current whereabouts are unknown.”

Earlier, in the Donetsk Region, in Slavyansk, occupied by Ukrainian troops, a local resident told the police that her son had been abducted. This was the report by a law enforcement source: “The woman went to the Slavyansk police on June 10 and stated that a group of people had grabbed her 20 year old son in the street. According to the woman, her son was taken to an unknown destination. ”

On June 12 (line 102 of the police report), an operations duty officer was informed that near the Troeschina Market in Kiev, an unknown person held a man in a car, demanding money. When law officers arrived on the scene, they saw a young man lying on the ground with no signs of life. Doctors pronounced him dead.

On June 1, eight year old Nastya Bobkova was abducted in her yard in Zaporozhye. On June 13, she was found dead on the island of Khortytsya in a forest plantation, near a training base belonging to Ukrainian neo-Nazis.

In social networks were reports of a search for missing student Jana Dmitrikova of the Zaporozhye Aviation College. The girl was returning home from work late at night on June 13 but never made it home.

Sixteen year old Susanna Sharkova, who had been missing, was found murdered in a private home in the Shevchenko district of Zaporozhye on March 11.

June 8, an unknown person driving a black Mercedes kidnapped a girl in Kostelni Street in Kiev. This was reported by the Ukrainian Ministry of the Interior.

On May 19, according to the aforementioned site, a girl was kidnapped in the Obolonskiy District of Kiev by an unknown person driving a Mercedes.

All of these messages resemble reports from the front lines of war. Serious crimes occur almost every day in Ukraine, most of which remain unsolved. Kidnappings in broad daylight, vehicle hijackings, robberies ‒ all of this has become commonplace in the country that won the “revolution of dignity” on Maidan Square.

In 2014, Ukraine registered more than one million criminal offenses, a nearly 90% increase in the number of serious crimes–most of them in the capital city of Kyiv.

The number of robberies since the beginning of this year is twice that of the same period of 2014. Almost all involved weapons. In the view of the president of the Ukrainian Federation of Security Professionals, Sergei Shabovta, the cause of this sharp increase in the number of armed assaults is a drastic rise in social tension and a large number of illegal firearms.

“In the first quarter of this year alone,” said Shabovta, “the number of crimes of violence involving the use of weapons has more than tripled. This statistic is, unfortunately, sometimes hidden from the public by the law enforcement system.”

The expert explained that in Ukraine, there has been an increase in the number of people suffering depression. Many of those have been left homeless and destitute. In addition, Shabovta noted a significant increase in illegal arms trafficking. There is information that Kiev is experiencing sharp increases in trafficked weapons from the so-called ATO zone (referring to the ‘Anti Terrorist Operation’ of the Ukraine government against Russian-language fighters in eastern Ukraine).

As reported by ‘Aydar’ battalion Chief of Staff Valentin Likholit to the correspondent of the Ukrainian edition of Vesti, weapons from the war zone are entering Kyiv both for sale and as backups for emergencies. “It works like this: thugs associate themselves with brokers, who then organize the delivery,” he said.

Most buyers want to buy Makarov (PM) and Tokarev (TT) combat pistols and cartridges, and grenades. Sellers offer “to obtain any weapons”, showing the items in photos. In today’s Ukraine, guns are easy to order for home delivery, even via social networks.

Incidentally, many mass media outlets already compare Ukraine with Dudayev’s Chechnya. We all know what happened to the nearly-forgotten ‘Ichkeria’.[1]

Most of the population became tired of thuggish lawlessness and supported an anti-terrorist operation by Russian troops and a return to the legal domain of the Republic of Russia.

According to analyst Vasily Muravitskiy, the main reason behind the worsening of the criminal situation in Ukraine is the destruction of the continuity of power. “The situation is such that the power in the country is lying in the dust. In the minds of thousands of people, there is the impression that they can just pick it up and use it. The government has given up the most important responsibility of power: it has ceded the right to use force to self-organized, semi-bandit battalions, some of which, like ‘Azov’ and ‘Aydar’, are recognized even abroad as fascist bandits.

“The state is unable to stop this because what remains of the state apparatus is directly involved in the mayhem. Take, for example, the appearance of a right-radical extremist organization at the building of the press-secretary of the Prosecutor General of Ukraine. He had come to support the chief of the SBU, Valentin Nalyvaychenko, who was summoned for questioning.

“Consider the pictures of burning oil depots, where lunches for the fire brigades were brought by volunteers instead of the state.

“The ‘Maidan’ government has launched a mechanism for the collapse of the state at the highest government level. Therefore, the ‘Ichkerization’ of Ukraine will continue. But the main problem is not even Ichkerization but, rather, the fact that in Ukraine today, there is not a single real force that could, or would want to, oppose the banditization of the country and its transformation into a free-for-all.”

Political analyst Victor Shapinov also believes that Ichkerization of Ukraine has already taken place. “Speaking of the lawlessness of armed men, a substitute for the state, it has already happened. And it all started right on the ‘Maidan’, where the nationalists seized the House of Trade Unions and the Ukrainian House [convention center] and the first thing they did was to create makeshift prisons and torture chambers.

“Even the ‘post-Maidan’ rule, which relies heavily on the terror of paramilitary groups, had to struggle with extreme manifestations of Ichkerization. Let us recall the elimination of one of the extremist leaders, Muzychko.[2] The process goes on.

“A recent example was the robbing of a gas station by ATO veterans who killed two police officers as they attempted to arrest them.[3] This is a case where employees of law enforcement agencies at least tried to stop the lawlessness of the “national heroes”. But how many cases might there be when the police were afraid to intervene?”

Svobodnaya Pressa (SP): Can we say that the state is neglecting its responsibility to protect civilians?

“This state did not declare this goal. It is not responsible to the citizens. But it is always ready to answer to their sponsors in the West. Some people have openly said: ‘If you are dissatisfied with something, you are agents of a foreign enemy.’ I’m not exaggerating. See statements by officials in Kiev. Look at the central television channels to see for yourself.”

SP: Will we come to the point that the majority of Ukrainians, like most residents of Chechnya at the beginning of the 2000s, will welcome troops who can put an end to the lawlessness?

“I think the picture is more complex than that. But before the militia of Donbass is greeted with flowers in the cities of central Ukraine, the Lugansk People’s Republic (LPR) and the Donetsk People’s Republic (DPR) must set an example by successfully building up a welfare state against the backdrop of a Ukraine plunging into the abyss. Of course, some progress has been made in this respect. For example, the nationalization of a number of important enterprises in the breakaway republics.

“But for now, there is still a question whether state-building will continue in Donbas. After all, there are the Minsk agreements stipulating that the LPR and DPR must return to Ukrainian jurisdiction. Meanwhile, to restore order in the country, there must be a clear-cut alternative to official Kiev. And not only a military alternative but also a political and ideological one.”

Ukrainian historian Vladimir Kornilov, director of the Center for Eurasian Studies, recalls that most armed crimes committed in Ukraine are now perpetrated by punitive forces that have been at the front. “As a result of the massacre unleashed a year ago by Kiev, arms are spreading around the country uncontrolled. Gangs formed under the guise of “volunteer battalions” (note, even the Prosecutor General of Ukraine has recognized that ‘Aydar’ is a gang) are now completely unchecked. And it would have been strange if all this had not led to a sharp increase in crime. The exponential growth in crime was birthed by ‘Maidan’ itself.”

SP: Why can’t the authorities do anything?

“What can we expect from the authorities, born with the aid of gangster methods? This government understands that without war, it would be swept away. All its efforts are aimed solely at trying to contain its gangs in Donbas, where criminals with weapons in their hands can do all sorts of crimes, while not allowing them to rampage too much in the rest of Ukraine.

“But even Kiev understands that these efforts are fruitless. Looters returning from the front cannot live and earn by any other means. The Kiev government consists of minions who live by the principle of the French proverb: ‘After us – the deluge’.”

SP: What is the likelihood of obtaining the consent of citizens for whatever power that can deliver them from the mayhem?

“The kind of chaos and lawlessness that now reigns in Ukraine always generates a desire among citizens for a ‘strong hand’ [to control it]. The political slant of this ‘hand’ usually does not worry the populace very much…”

Notes by New Cold War.org:
[1] Dzhokhar Musayevich Dudayev was the first president of the ‘Chechen Republic of Ichkeria’ from 1991 until his death in 1996. He was killed by Russian armed forces.
[2] Aleksandr Muzychko was shot and killed by Ukrainian police in March 2014.
[3] Two police officers were killed and three others were hospitalized by automatic gunfire in the early hours of Sunday, May 3 as they gave chase to two gunmen who had robbed a gas station. The gunmen and their accomplices were members of several neo-Nazi battalions, including ‘Aidar’ and ‘Azov’. Among the accomplices later arrested was 19 year old Vera Zaverukha. Police video of the aftermath of the shootout is here.

This article is also published in CounterPunch, July 29, 2015.