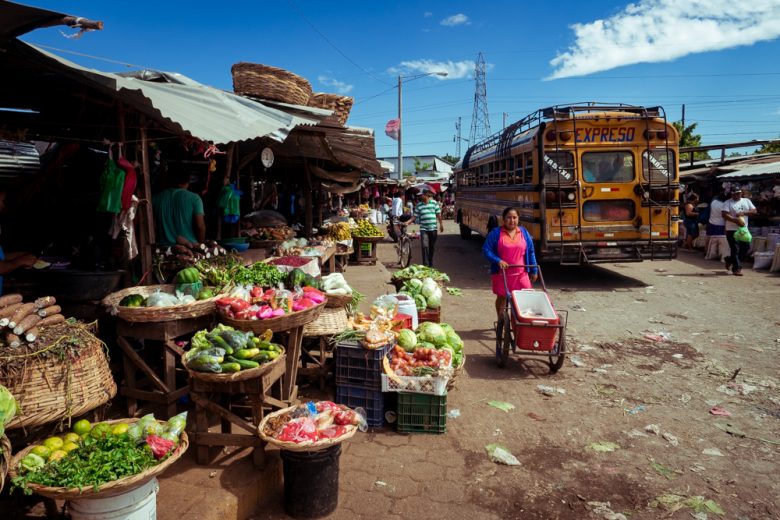 This article, which was published in early September, is no less relevant today. It provides a comprehensive critique of the Guardian newspaper’s reportage of the situation in Nicaragua and questions its claims.

On its September 7 article, the once progressive newspaper reports that Nicaragua was brought to a standstill by a general strike called by the Civic Alliance, one of the main opposition coalitions behind the attempted soft-coup, citing how banks and upscale shopping malls in Managua are all closed in support of the strike. What The Guardian fails to mention is that those upscale businesses only represent a small portion within the Nicaraguan sector, which is mostly driven by micro, small, and mid-size businesses that are part of the country’s popular market economy, which in turn employs about 90 percent of the country’s workers. In truth, commerce was business as usual throughout Nicaragua, as these images show.

The paper then quotes Ana Margarita Vigil, calling her the ‘national director of the outlawed Sandinista Renovation Movement (MRS).” What they omit is that the MRS was not arbitrarily “outlawed,” it simply lacks the legal status of a political party because its leaders have not been able to obtain more than 1.3 percent of the popular vote, which isn’t enough to qualify them to run in elections.

“With 200 political prisoners and [new] murders every day,” Vigil is quoted, “this strike is just one more sign that nothing is normal here in Nicaragua.” Here, again, The Guardian leaves out vital information. First, since the roadblocks were removed, the only people who have died as a result of political turmoil have been Sandinistas, including Lenin Mendiola, who died as a result of gunshots fired directly  from an opposition march in Matagalpa on August 11 of this year.

Another Sandinista,  Bismarck Martinez Sanchez, is presumed dead after video evidence of his capture and torture was found on the cell phones of opposition operatives; he was kidnapped at a tranque (or roadblock) on June 29 of this year. Several of the perpetrators of these crimes have been arrested. They are the kind of criminals being called “political prisoners,” by people in the opposition, such as Vigil.

“Last week, Ortega expelled a UN human rights mission after it published a report denouncing government repression and describing a “climate of fear” in the Central American country,” continues the article, giving the impression the Nicaraguan government punished the UN for publishing its report. In reality, it was the Nicaraguan government that invited the UN mission, at a time when political violence still prevailed in many parts of the country, but that violence has largely ended, and since the UN already conducted its investigation and issued its report, there was no longer a need for their continued presence. The team was not ‘expelled’ from Nicaragua, as was the case in Guatemala, where President Jimmy Morales, with police and military leaders in tow, asked the UN mission to initiate its transfer out of the country.

The paper portrays the opposition as a strong and unified movement that represents the sentiment and interest of the Nicaraguan people against a repressive dictatorship, but the reality is almost the exact opposite. For starters, the opposition not only lacks a well-defined and unified leadership, but the different actors within it are constantly at odds with one another. On the day the Civic Alliance issued its call for a national strike, a leader from the so-called Azul y Blanco Movement asked its members not to follow the Alliance on social media, and continued to promote a change.org petition asking the Alliance to become more belligerent.

Differences also exist between pro-choice civil society organizations and the fervidly pro-life, homophobic, and deeply misogynist Catholic Church, which has perhaps been the strongest pillar in the anti-Sandinista charge, a role the church has played historically.

Other differences exist between student groups that have openly advocated for a prolonged general strike, and wealthy business groups who would lose a lot of money from such a measure. Lastly, there are those within the opposition who consider themselves leftists, and those who have traveled to the US, where they have met with extreme right wing republicans who are co-sponsors of the NICA Act in the US Congress, a measure that would effectively amount to an economic embargo. In the case of Vigil and other MRS leaders, they have met with Representative Ileana Ros-Lehtinen, who is trying to re-arm the contras.

In contrast to everything The Guardian would have its readers believe, and with the disarticulation in leadership of the right-wing opposition, the Sandinista government and its base are stronger than ever.

Despite western media claims that protests have continued, the only significant marches taking place in Nicaragua are led by pro-government people, clamoring for justice for those who were wounded, tortured, disappeared, killed, burned, and for those who are still being persecuted and hunted, for the simple crime of being Sandinista.