The French Protests and the Politics of Alliances: What Can be Learned? 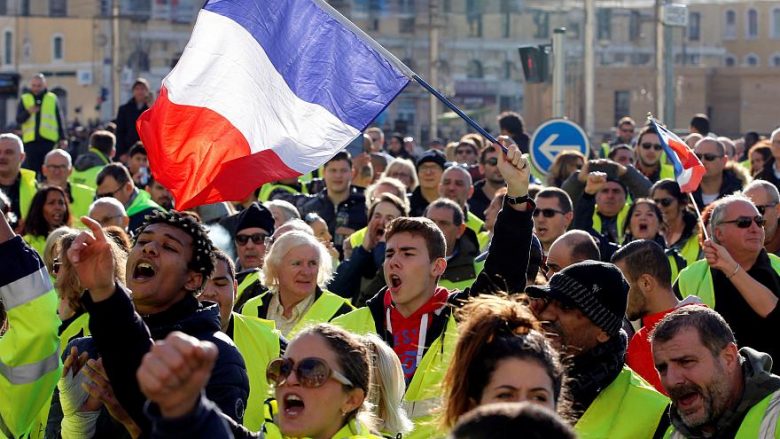 Following Monday’s posting of the demands made by the Gilets Jaunes and Macron’s address, this piece by Steve Ellner considers how the protests may signal a new stage that opens opportunities for the left at the international level.

It shouldn’t be surprising that the right in the form of Marine Le Pen and Donald Trump have attempted to give voice to the protests that have wracked France in recent days. In fact, the protests may signal a new stage that opens opportunities for the left at the international level. That is because the protests unify diverse non-elite sectors of the population and is directed against the economically privileged and the French political establishment. Their rejection of a tax on fuel prices has now expanded to include an array of other economic demands such as an increase in the minimum wage, reduction of the work week and improved retirement benefits. Furthermore, the protests skirt the right’s leading banners such as a halt to immigration, zero tolerance approach to law and order and other racist-driven formulations.

The protests have terror-stricken the establishment because they open the possibility of a broad-based popular alliance which is the Achilles heel of the existing system. Establishment leaders know full well that if diverse disadvantaged groups, including the working class, the rural poor, ethnic and racial groups, immigrants, gays, women, etc., were to unite, the days of elite rule would be numbered. One remarkable example of this class convergence was Argentina in 2001-2002 when workers the unemployed and members of the middle class engaged in militant, angry anti-government protests leading to the resignation of neoliberal president Fernando de la Rua.

Over the last quarter of a century, the right has opportunistically crafted an alliance of its own which it deceitfully claims to be anti-elite. The right’s rise during this period was largely due to its ability to tap into the widespread discontent of the non-privileged who feel left out in the age of globalization.

The right’s populism during these years, like all forms of populism as demonstrated by Ernesto Laclau, is based on a chain of equivalences that underpins unity, but also the politics of antagonism in which elite groups are targeted. For the pro-Trump, U.S. ultra-right, one of the “elitist” targets is the CEOs who squander money as a result of their extravagant life style. It’s the hedge funds and other financial institutions that step in to discipline the companies by imposing lean-and-mean policies at the expense of both workers and the bureaucrats including the managers. An example is F. Ross Johnson, the CEO of Nabisco who was a nice guy but too much of a spendthrift, as depicted in Barbarians at the Gate, one of Steven Bannon’s favorite books. But the “anti-elite” alliance of the right also singles out the universities, “liberal” media (really centrist not liberal), “liberal” Hollywood and experts of all kinds including scientists. One only needs to listen to Fox News to hear constant scorn for the college educated.

Trump’s alliance brings together the workers who have been shortchanged by these allegedly elite groups as are the men who are the victims of political correctness. A third partner in the anti-elite alliance on the right are the “winners” (many are con artists) who know how to beat the system, as personified by Trump himself. “Outsiders” like Trump are alleged to have empathy for the common people, their affluence notwithstanding.

But it was only a matter of time before the chicanery of politicians like Trump became exposed. The deceit has been going on for too long for people not to catch on. Bush Jr., following the advice of Karl Rove, used it by employing self-effacing humor and claiming to be anti-Washington simply because he preferred his Crawford ranch to the White House. But how can the son of an ex-president who is worth so many millions claim to be an outsider? Obama’s claim to being anti-establishment came from being African-American. But obviously his loyalty lied with his patrons, both black and white.

The events in France are demonstrating the hollowness of the alliance building based on cheap populism coming from the right. Many of the yellow vest demonstrators in France are from rural areas, which have been fertile grounds for Le Penn’s National Rally party. But the slogans and demands of the yellow vest demonstrators are not typical of the right and some of the participants and many of the supporters live in the cities. One interpretation of right-wing populism is that it represents a rural rejection of urban values. This is not the case in France.

The demonstrations in France are all about economic issues. As such, they shed light on an ongoing debate over leftist strategy. One general position argues that the key agent of change is the working population, which is mostly concerned with economic issues. A second position puts the accent mark on identity politics, which is most appealing to the middle class. Most people on the left, myself included, believe that both approaches are important, and the issues associated with both need to be underscored. But in politics, as in life in general, prioritization is key and all worthy issues cannot be given equal emphasis.

Events in France are demonstrating that if one of the two approaches is to receive priority treatment, it should be the former. Unlike in the last period of leftist resurgence in the 1960s, when identity politics was given a great impulse, the era we are currently living in going back over a quarter of a century has been characterized by economic stagnation and deterioration of living standards for a large bloc of the population. The greatest challenge for the left is linking economic issues related to the work place with other progressive banners and overcoming the Balkanization of the left stemming from identity politics. The way the largely spontaneous protests in France are shaping up, there is a glimmer of hope for such alliances, which make a lot more sense when they have a leftist content than when they are led by con artists on the right.