The evangelicals who pray for war with Iran 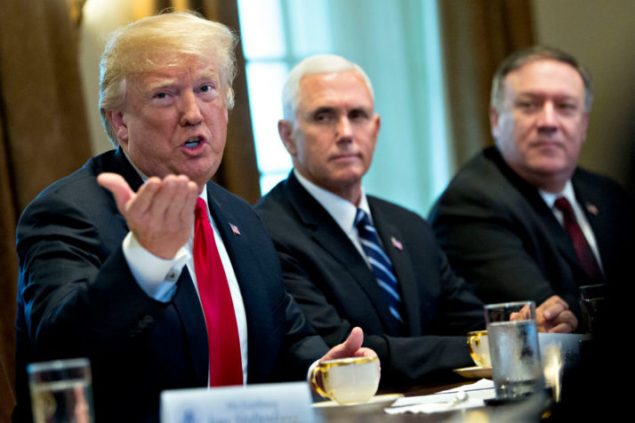 Last Friday, a day after Iranian Maj. Gen. Qassem Soleimani and nine others were killed in a U.S. drone strike in Iraq, the Christian Zionist advocacy group Christians United for Israel emailed its millions of supporters to praise President Trump’s move. “This Decisive Action Will Save Countless Lives,” read the subject line, echoing the assessment delivered that morning by Secretary of State Mike Pompeo on Fox and Friends. The bombing showed that Trump would take “swift and decisive” action to protect Americans, Pompeo had told the president’s favorite morning news program. Vice President Mike Pence later claimed that Americans are “safer today.”

Pompeo and Pence reportedly were the top officials pushing Trump to kill Soleimani. They’re also devout evangelicals and major allies of CUFI. This is not a coincidence. While the organization is best known for its unflagging “support” for Israel—that is, for Israel’s expansion of settlements in the occupied West Bank and protracted erasure of the possibility of a future Palestinian state—it has, since its founding in 2006, depicted Iran as an existential threat to Israel. The group opposed President Obama’s nuclear deal with Iran, denouncing it as “dangerous for Israel, the United States and the entire world,” and in the Trump administration, CUFI has found hope for a more bellicose posture.

Televangelist John Hagee launched CUFI in 2006, calling for military action against Iran, then led by President Mahmoud Ahmadinejad, whom Hagee compared to Hitler. At the time, Hagee had been claiming that Iran would soon “have the nuclear capability to make a bomb, a suitcase bomb, a missile head, or anything they want to do with it.” That was untrue, given contemporaneous expert assessments of Iran’s projected nuclear advances. But for Hagee, a more militaristic approach was necessary in order to avert “an American Hiroshima.” He urged his supporters to take a stand, as they were meant to “for a time such as this,” a common evangelical reference to Queen Esther, celebrated on the Jewish holiday of Purim, who saved the Jews from extermination at the hands of Haman, the genocidal adviser to the Persian king.

In his 2006 book, Jerusalem Countdown, Hagee imagined an elaborate scenario in which a U.S. or Israeli strike on Iran would trigger an “inferno [that] will explode across the Middle East, plunging the world toward Armageddon.” Faced with scrutiny over his apocalyptic theology, he strained to create a discrete image for his new political organization, insisting that his extensive writings on biblical prophecy about the Rapture and Second Coming were distinct from CUFI’s lobbying agenda. But it was a rocky start for the organization. In 2008, while running for president, John McCain first accepted, then rejected, Hagee’s endorsement. The rebuff was seen as damaging to the political neophyte and a brave stance by McCain against fringe elements within the GOP’s evangelical base. At CUFI’s annual Washington Summit, held just two months later, only three members of Congress attended.

But one of those three members was a certain congressman from Indiana: Pence. He continued to maintain close ties with the organization, and in 2014 CUFI paidfor then-Governor Pence and his wife to travel to Israel to celebrate Christmas. With Pence as vice president, Hagee’s star has risen even more. He has claimed a role in convincing Trump to move the American Embassy in Israel from Tel Aviv to Jerusalem, writing on his website that he told the president at a White House dinner that Jerusalem is where Jesus is coming back, to “set up His throne on the Temple Mount where He will sit and rule for a thousand years of perfect peace.” Hagee delivered the benediction at the embassy dedication, a day Hagee described as “nothing short of a divine miracle!”

On matters of Iran, too, there has been a seamless relationship between CUFI and the Trump administration. In 2017, just a few months into Trump’s presidency, Pence addressed the CUFI Washington Summit, assuring attendees that “President Trump has put Iran on notice: America will no longer tolerate Iran’s efforts to destabilize the region and jeopardize Israel’s security,” and promising that under Trump, “the United States of America will not allow Iran to develop a useable nuclear weapon.” Trump’s subsequent actions have only elevated the specter of chaos in the region. In 2018, at Pompeo’s urging, he withdrew the U.S. from the Iran nuclear deal, a decision that looks even more reckless today than on the day he made it—and yet, his evangelical supporters consider this one of his top accomplishments.

For Pompeo and his evangelical allies, Trump’s bombast is superior to Obama’s diplomacy, and they have spun his feckless week after the Soleimani killing as a shrewd balancing act between war and peace. After Trump’s Wednesday announcement that the U.S. would not retaliate for Iranian strikes on American military targets in Iraq the previous day, CUFI wrote in a briefing to supporters that Trump had “made clear to the Iranians that the US is neither seeking nor afraid of conflict with Iran,” and that “for the first time in years, Iran faces an American leader who is ready, willing, and able to stand up to Iran or make peace with the Islamic Republic.”

Pompeo, in a political career spanning three terms in the House of Representatives, a brief stint as CIA director, and now, as the country’s top diplomat, has promotedintertwining his Christian faith with his public service. But he has scoffed at charges that evangelicals promote theocracy. In a March 2019 interview with the Christian Broadcasting Network, while visiting Israel, Pompeo was asked whether Trump “has been sort of raised for such a time as this, just like Queen Esther, to help save the Jewish people from the Iranian menace?” “As a Christian,” Pompeo replied, “I certainly believe that’s possible.” A few months later, he told the CUFI Washington Summit, “A lot of people get spun up with the wrong ideas that American evangelicals want to impose a theocracy on America.” Instead, he said, “I wish they would be concerned about the real theocratic takeover that has been happening in Iran for the last four decades.” He repeated the familiar Esther story and then thanked God for President Trump—“an immovable friend of Israel.” “We’ve implemented the strongest pressure campaign in history against the Iranian regime,” Pompeo said, “and we are not done.”