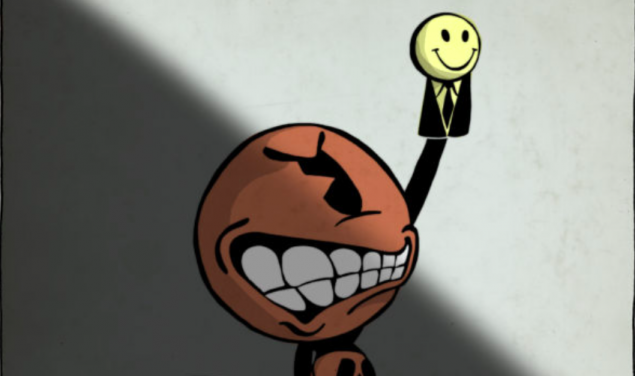 Dying empires historically squander the last capital they have, economic, political and military, on futile, intractable and unwinnable conflicts until they collapse. They seek in these acts of micro-militarism to recapture a former dominance and lost stature.

Our democracy is not in peril—we do not live in a democracy. The image of our democracy is in peril. The deep state—the generals, bankers, corporatists, lobbyists, intelligence chiefs, government bureaucrats and technocrats—is intent on salvaging the brand. It is hard to trumpet yourself as the world’s guardian of freedom and liberty with Donald Trump blathering on incoherently about himself, inciting racist violence, insulting our traditional allies along with the courts, the press and Congress, tweeting misspelled inanities and impulsively denouncing or sabotaging bipartisan domestic and foreign policy. But Trump’s most unforgivable sin in the eyes of the deep state is his criticism of the empire’s endless wars, even though he lacks the intellectual and organizational skills to oversee a disengagement. 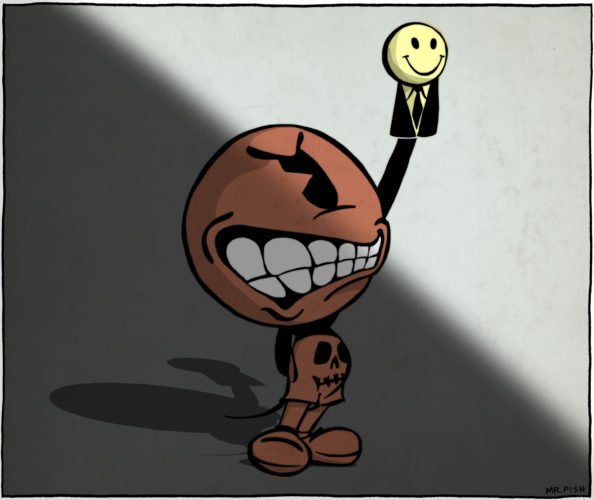 The deep state committed the greatest strategic blunder in American history when it invaded and occupied Afghanistan and Iraq. Such fatal military fiascoes, a feature of all late empires, are called acts of “micro-militarism.” Dying empires historically squander the last capital they have, economic, political and military, on futile, intractable and unwinnable conflicts until they collapse. They seek in these acts of micro-militarism to recapture a former dominance and lost stature. Disaster piles on disaster. The architects of our imperial death spiral, however, are untouchable. The clueless generals and politicians who propel the empire into expanding chaos and fiscal collapse are successful at one thing—perpetuating themselves. No one is held accountable. A servile press treats these mandarins with near-religious veneration. Generals and politicians, many of whom should have been cashiered or put on trial, are upon retirement given lucrative seats on the boards of the weapons manufacturers, for whom these wars are immensely profitable. They are called upon by a fawning press to provide analysis to the public of the mess they created. They are held up as exemplars of integrity, selfless service and patriotism.

After nearly two decades, every purported objective used to justify our wars in the Middle East has been upended. The invasion of Afghanistan was supposed to wipe out al-Qaida. Instead, al-Qaida migrated to fill the power vacuums the deep state created in the wars in Iraq, Syria, Libya and Yemen. The war in Afghanistan morphed into a war with the Taliban, which now controls most of the country and is threatening the corrupt regime we prop up in Kabul. The deep state orchestrated the invasion of Iraq, which had nothing to do with the attacks of 9/11. It confidently predicted it could build a Western-style democracy and weaken Iran’s power in the region. Instead, it destroyed Iraq as a unified country, setting warring ethnic and religious factions against each other. Iran, which is closely tied to the dominant Shiite government in Baghdad, emerged even stronger. The deep state armed “moderate” rebels in Syria in an effort to topple President Bashar Assad, but when it realized it could not control the jihadists—to whom it had provide some $500 million in weapons and assistance—the deep state began to bomb them and arm Kurdish rebels to fight them. These Kurds would later be betrayed by Trump. The “war on terror” spread like a plague from Afghanistan, Iraq, Syria and Libya to Yemen, which after five years of war is suffering one of the world’s worst humanitarian disasters. The financial cost for this misery and death is between $5 trillion and $8 trillion. The human cost runs into hundreds of thousands of dead and wounded, shattered cities, towns and infrastructure and millions of refugees.

Trump committed political heresy when he dared to point out the folly of unchecked militarism. He will pay for it. The deep state intends to replace him with someone—perhaps Mike Pence, as morally and intellectually vacuous as Trump—who will do what he or she is told. This is the role of America’s executive: Personify and humanize the empire. Do so with pomp and dignity. Barack Obama—who speciously reinterpreted the 2001 Authorization for Use of Military Force to give the executive the right to assassinate anyone abroad, even a U.S. citizen, deemed to be a terrorist—excelled at the game.

The removal of Trump from office would not threaten corporate power. It would not restore civil liberties, including our right to privacy and due process. It would not demilitarize the police or champion the rights of the working class. It would not impede the profits of the fossil fuel and banking industries. It would not address the climate emergency. It would not disrupt the warrantless surveillance of the public. It would not end extraordinary renditions, the kidnapping of those around the globe considered to be enemies of the state. It would not halt the assassinations by militarized drones. It would not halt the separation of children from their parents and the warehousing of these children in filthy, overcrowded conditions. It would not remedy the consolidation of wealth and power by the oligarchs and the further impoverishment of the citizenry. The expansion of our prison system and of black sites throughout the world, sites where we torture, would continue, as would the gunning down of poor, unarmed citizens in urban wastelands. Most importantly, the catastrophic foreign wars that have resulted in a series of failed states and wasted trillions of taxpayer dollars, would remain sacrosanct, enthusiastically embraced by the leaders of the two ruling parties, puppets of the deep state.

The impeachment of Trump, despite the enthusiasm of the liberal elite, is mostly cosmetic. The entire political and governmental system is corrupt. Hunter Biden was reportedly paid $50,000 a month to sit on the board of the Ukrainian gas company Burisma Holdings, although he has no training or experience in the gas industry. He had previously worked for the credit card corporation MBNA, which was one of Joe Biden’s largest campaign contributors when he was a senator from Delaware. Hunter Biden was hired by Burisma Holdings for the same reason he was hired by MBNA. His father, long a tool of corporate power and the military-industrial complex, in short the deep state, was a senator and later the vice president. Joe Biden, the Clintons and the Democratic Party leaders personify the legalized bribery that defines their rivals in the Republican Party. Corporate candidates in the two ruling parties are preselected, funded and anointed. If they do not abide by the demands of the deep state, which protects corporate interests and the management of empire, they are removed. There is even a word for it—primarying. Corporate lobbyists write the laws. The courts enforce them. There is no way in the American political system to vote against the interests of Goldman Sachs, Citigroup, AT&T, Amazon, Microsoft, Walmart, Alphabet, Facebook, Apple, Exxon Mobil, Lockheed Martin, UnitedHealth Group or Northrop Grumman.

We, the American public, are spectators. An audience. Who will be seated when the game of musical chairs stops? Will Trump be able to hold on to power? Will Pence be the new president? Or will the deep state elevate a political hack like Biden or a neoliberal apologist such as Pete Butiggieg, Amy Klobuchar or Kamala Harris to the White House? Will it draft Michael Bloomberg, John Kerry, Sherrod Brown or, God forbid, Hillary Clinton? And what if the deep state fails? What if the rot in the Republican Party, or what Glen Ford calls Trump’s “white man’s party,” is so profound it won’t sign on for the political extinction of the most incompetent president in American history? The power struggle, which includes blocking Bernie Sanders and Elizabeth Warren from obtaining the Democratic Party nomination, will make for months of great television and generate billions in advertising revenue.

The Russia conspiracy, after the release of the Mueller report, proved to be a dud. The deep state actors, however, were re-energized by Trump’s decision to pressure the government of Ukraine to investigate Biden. Trump, this time, seems to have given his deep state enemies enough rope to hang him.

The impeachment of Trump marks a new and frightening chapter in American politics. The deep state has shown its face. It has made a public declaration that it will not tolerate dissent, although Trump’s dissent is rhetorical, mercurial and ineffectual. The effort to impeach Trump sends an ominous message to the American left. The deep state not only intends to prevent, as it did in 2016, Bernie Sanders or any other progressive Democrat from achieving power, but has signaled that it will destroy any politician who attempts to question the maintenance and expansion of empire. Its animus toward the left is far more pronounced than its animus toward Trump. And its resources to destroy those on the left are nearly inexhaustible.

The political philosopher Sheldon Wolin saw it all in his 2008 book “Democracy Incorporated: Managed Democracy and the Specter of Inverted Totalitarianism.” He wrote:

The political role of corporate power, the corruption of the political and representative processes by the lobbying industry, the expansion of executive power at the expense of constitutional limitations, and the degradation of political dialogue promoted by the media are the basics of the system, not excrescences upon it. The system would remain in place even if the Democratic Party attained a majority; and should that circumstance arise, the system will set tight limits to unwelcome changes, as is foreshadowed in the timidity of current Democratic proposals for reform. In the last analysis the much-lauded stability and conservatism of the American system owe nothing to lofty ideals, and everything to the irrefutable fact that it is shot through with corruption and awash in contributions primarily from wealthy and corporate donors. When a minimum of a million dollars is required of House candidates and elected judges, and when patriotism is for the draft-free to extol and for the ordinary citizen to serve, in such times it is a simple act of bad faith to claim that politics-as-we-now-know-it can miraculously cure the evils which are essential to its existence.

There are no internal or external checks on the deep state. The democratic institutions, including the press, that once gave citizens a voice and a say in the exercise of power have been neutered. The deep state will further the corporate consolidation of wealth and power, expand the social inequality that has thrust half of Americans into poverty or near poverty, strip us of our remaining civil liberties and feed the rapacious appetites of the military and the war industry. The resources of the state will be squandered as the federal deficit balloons. The frustration and feelings of stagnation among a disempowered and neglected citizenry, which contributed to the election of Trump, will mount.

There will come a moment of reckoning, as there has during the last few days in Lebanon and Chile. Social unrest is inevitable. Any population can be pushed only so far. The deep state, incapable of reform and determined to retain its grip on power, will morph under the threat of popular unrest into a corporatized fascism. It has at its disposal the legal and physical tools to instantly turn the United States into a police state. This is the real danger behind the deep state’s drive to impeach Trump. It is a stark message to obey or be silenced. Trump, in the end, is not the problem. We are. And if the deep state fails to rid itself of Trump it will, however reluctantly, use him to carry out its dirty work. Trump, if he manages to survive in power, will get his military parades. We will get, with or without Trump, tyranny.