The bomb attack on the antiwar march in Ankara, Turkey on Oct 10

By Chris Stephenson, published on his Facebook page, Oct 11, 2015

English speaking friends, here is the longer note I promised you yesterday. There is much more to write, but I need to turn to organising what we will do in our workplace tomorrow. 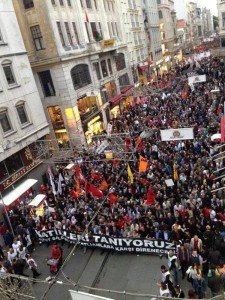 Thousands march in Istabul on Oct 10, 2015 to condemn the twin-bomb massacre in Ankara that same day (Revolution News)

A double suicide bombing at a Trade Union organised peace march in Ankara on Saturday, October 10 killed over 100 people and injured over 500.

The march had been called by two trade union federations–DISK and KESK–, by the Chambers of Engineers and Architects and by the Turkish Medical Association. Hundreds of union-organised buses brought tens of thousands of people from all over Turkey to the assembly point near the Ankara railway station.

We gathered in front of Ankara railway station. While we were organising our contingent, distributing flags and banners and preparing to enter the line up for the march we heard a very loud double bang. People started to cry. We did what we could to stop panic and to get people to walk, not run, calmly away from the explosion. People had lost their shoes, their friends, their composure. As we moved away we saw human body parts lying on the ground, thrown there by the force of the explosions. We now realise we had been mid way between the two explosions and about 30 metres away from each.

We turned a corner and passed under the railway bridge. There we saw riot police approaching in full gear, but ambulances being kept waiting.

We now know that these riot police attacked those rescuing the wounded with tear gas and water cannon while the dead were still lying on the ground.

We had traveled from Istanbul to Ankara on a postal workers union bus. Before we could return to Istanbul, we needed to wait for everyone to be accounted for. Finally one postal worker whose leg had been shredded by shrapnel from the bomb arrived in a taxi. We had to lift him up the stairs into the bus. They hadn’t even given him a crutch in the hospital. We got word that the President of the number 9 branch of the Postal Workers Union was in intensive care. With heavy hearts, we set off home.

This is the latest in series of violent provocations that have occurred since it became clear that the HDP (Peoples Democratic Party) was going to get enough votes in the June 7 general election to deny President Recep Tayyip Erdogan the parliamentary majority he needed to impose a Putin-style executive presidency. Before the election, there were 170 violent attacks on HDP offices, bombings of HDP offices in Adana and Mersin, then the bombing of the final HDP election rally in Diyarbakir [June 5, 2015], killing four people.

Erdogan’s AK Party have made a pact with the devil in the shape of Turkey’s deep state, the secret apparatus within the security forces that was responsible for the years of terror in the 1990s when thousands were the victims of “murder by persons unknown” or simply disappeared, their bones dissolved in acid wells.

Just as in the 1990s, killings blamed on “terrorists” provoke fear and hatred. Years later, it turns out that they were not the work of “terrorists” but carried out, or ordered, or arranged by the deep state.

The single most important act that preceded the turn to an intensification of violence in Turkey and the end of the two year ceasefire with the PKK was the bombing at Suruç [July 20, 2015] which killed 33 young socialist activists. Prime Minister Davutoglu now makes the absurd claim that the government “caught the person responsible”. It was a suicide bombing. No living person has ever been held to account, despite the fact that the bomber was being tracked by the security forces. The bombing was blamed on Islamic State although the notoriously publicity hungry Islamic State has never claimed responsibility, despite BBC claims to the contrary. The bomber may or may not have believed that he was acting for Islamic State, but no actual connection has been established.

It was an intervention by the United States after Suruç that began the intense government violence that we now live with every day. In exchange for use of the Incirlik air base in South Eastern Turkey by U.S. warplanes to bomb Syria, the U.S. gave the green light to bombing raids by Turkish war planes on Kurdish targets inside Iraq and in Turkey.

Now, town by town, city by city the security forces of the Turkish state are declaring curfews, attacking the population and arresting local elected officials. They are attempting to force election officials to declare that the election cannot be safely carried out in these districts where the HDP gets 80-90% of the vote.

But all of this violence and repression appears not to be working. Opinion polls show no fall in the support for the HDP. If anything, support among the embattled Kurds is increasing. Support for the HDP among Turks and other ethnic groups is not falling, either.

The response of the government, the president, and the forces of Turkey’s “deep state” with whom they have made an alliance, is to step up the violence even further.

Every week, the violence, the repression and the suppression of free speech is increasing. HDP co-chair Selahattin Demirtas was due to speak on Bugün, a small TV channel this week. 24 hours before the broadcast, that channel and seven others were removed from the Digiturk TV satellite by order of the public prosecutor for “supporting terrorism”. One of the channels was a children’s channel.

Which brings us to the bombing in Ankara.

The government has not declared three days mourning for the victims in Ankara. It has declared three days mourning for the Ankara victims and the police, soldiers and paramilitary village guards who have died since July. Notably, the civilians who have died in the Kurdish areas in the same period were not included. In his statement about the bombings, Prime Minister Davutoglu started by posing the PKK as a possible culprit, followed by a left guerilla group and only then Islamic State. He spent 20 out of 30 minutes of his statement attacking the HDP.

In response to Davutoglu’s attacks, HDP co-chair Selahattin Demirtas said “We are Turks and we are Kurds, we are soldiers, we are police. We are the ones who die. We know what your children get up to. They don’t die. We die. And you are responsible.”

Now the Turkish government is getting backing from the U.S. for its attacks on the Kurds by offering use of the Incirlik air base. And also blackmailing the European Union into supporting Turkey’s regional ambitions by threatening to open the doors to allow the two million Syrians who are being denied proper refugee status in Turkey to cross the border into Europe.

The hands of the EU and U.S. are dirty. They have always stood behind repressive regimes in Turkey and approved every military coup in Turkey’s history. Now their interventions in Syria are also responsible for fueling the rising death toll in Turkey. We have suffered 600 dead since the June 7 election.

The massacre in Ankara may be blamed on the Islamic State. The real culprits are closer to home. Bombing Syria is no solution. It will strengthen Islamic State in Syria and Iraq and increase the murderous activities of the deep state in Turkey.

Using events in Turkey as an excuse for voting for British bombing of Syria would be dangerous hypocrisy.

Now the unions and associations that called Saturday’s peace demonstration have called a general strike for Monday and Tuesday. The divided nature of the unions in Turkey means that this general strike will not bring life to a stop in Turkey. It will, however, be an opportunity in the work places and on the streets to build the unity of the exploited from different ethnicities and beliefs against the elites who want to defend their power by having us die fighting one another. This class unity is the only way forward for Turkey and for the whole of the Middle East.

Additional Facebook posting:
Every week, events from the 1990s emerge that were blamed on “terrorists” but are now acknowledged officially to have been carried out by the state. Even the existence of JITEM, one of the agencies organising death squads, was denied by the government. Again, now acknowledged. They are digging bodies from unmarked mass graves from the 90s, too. There is an undeniable historical record.

Call to the international community to condemn the bombing attack in Ankara on October 10, 2015, by Selahattin Demirtaş and Figen Yüksekdağ, co-chairs of the People’s Democratic Party (HDP), Turkey, October 12, 2015

Ankara terror attack: Protesters clash with police after ambulances were ‘blocked’ following explosions, by Lizzie Dearden, The Independent, Oct 10, 2015
Protesters claimed police prevented ambulances taking the wounded to hospital in the wake of the bombing