Terrorizing the vulnerable in the United States

Undocumented people are living in fear as the Trump administration accelerates arrests under a brutal policy whose “family values” call for ripping families apart. 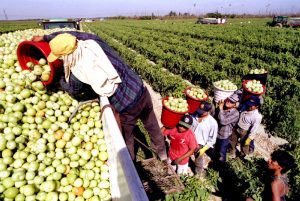 Migrant workers on a Florida farm in 2015 (Reuters)

ELIZABETH, NEW JERSEY – Edison, 50, an undocumented man from Uruguay, wraps his knuckles against the basement wall of the row house as if it is a front door.

“Who is it?” a 44-year-old Salvadoran immigrant named Antonio asks in Spanish.

“La migra,” Edison says, using the Spanish slang for the Border Patrol and the U.S. Immigration and Customs Enforcement (ICE). “Is Antonio inside?”

“What do you want?” Antonio asks.

“We want to speak with you,” says Edison, who like everyone else in the basement asked me not to use his or her last name. “Open the door.”

“Did I commit a crime?” Antonio asks.

“We have a warrant for your arrest,” Edison says.

“Slide it under the door,” Antonio says. 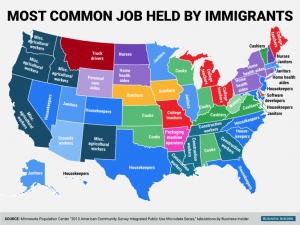 Most common jobs held by immigrants in the U.S.

Sara Cullinane, a lawyer with Make the Road New Jersey, an organization that assists the undocumented, interrupts the skit. She looks around at the 16 undocumented people, including children, seated on folding chairs. Dangling from the basement ceiling are blue streamers left over from a child’s birthday party.

“What are the three things you look for?” she asks the group.

“Is the document signed by a judge,” several people say.

“How do you spell ‘judge’ in English,” she asks.

The group dutifully spells out “j-u-d-g-e” in Spanish.

“If it is not signed by a judge do you open the door?” she asks.

“No,” the group answers.

“See if it is a judicial warrant,” a woman says.

“What should Antonio do?” the lawyer asks.

“Keep the door closed,” the group says. “And don’t sign anything.”

“You have no obligation to tell them what country you are from,” the lawyer adds in Spanish. “Tell them you will not speak to them until you contact a lawyer. They may try and use tricks to get inside. They may ask to see your passport. They may ask to look in the house to see if it is secure. They may ask who else lives there. They may ask if you are legal or illegal. If they do not have a search warrant or an arrest warrant signed by a judge, do not let them in. And don’t answer their questions.”

“If Antonio is arrested does he lose his rights?” she asks.

“Even if you have DACA [Deferred Action for Childhood Arrivals] you don’t have to say anything,” the lawyer says. “They are taking DACA kids too.” 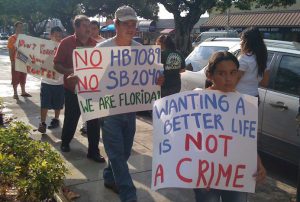 The acceleration of arrests by the Trump administration among the estimated 11 million undocumented people in the United States is spreading panic throughout communities such as Elizabeth, where at least half of the population is foreign-born. Elizabeth police officers in February joined ICE agents in raiding a popular small business in an unsuccessful attempt to arrest a woman, who at the time was there with her two small children. The February raid, especially because of the participation by the police, along with the call by the Trump administration for widespread deportations, has radically reconfigured life in this depressed New Jersey city outside of New York City, as it has in many other immigrant communities.

Undocumented parents of U.S. citizens are signing power-of-attorney papers so that if they are seized by ICE agents someone will have the legal authority to care for the children they leave behind. Businesses in immigrant communities have seen a precipitous drop in sales as families hoard what little money they have so they will have some resources if they are deported. Employers who hire the undocumented often abuse workers, including through wage theft, knowing that their employees will not report them. Undocumented people who witness criminal activity or are victims of crime usually refuse to go to the police. Those who drive do so without insurance, a driver’s license or registration, and no one carries foreign passports or papers that can identify them as noncitizens. Landlords are extorting higher rents. And some parents, fearful of taking their children to school or of having undocumented children in school, are keeping their sons and daughters home. Day care centers have experienced a drop in enrollment. Police, in open acts of racial profiling, randomly pull over drivers who appear to be Latino. And ICE raids routinely sweep up people whose names never appeared on deportation orders. ICE, for example, arrested a young woman last week with no criminal record in a sweep of Elizabeth’s busiest immigrant business district.

“People are being picked up when they show up to criminal court or municipal court in New York City,” said Cullinane. “They are being picked up in front of their homes when they leave for work. When ICE has administrative warrants, not judicial warrants, they know they cannot go inside. They use subterfuge. They wear plain clothes and drive in unmarked cars and carry a picture of the person they want. ICE agents under Donald Trump can arrest people if they are only suspected of having engaged in criminal activity, no matter how minor. I have never seen this level of fear.” [Editor’s note: An administrative warrant in an immigration case, signed by an ICE agent, names a person as a target for possible arrest and deportation. A judicial warrant in an immigration case, signed by a judge, is a court document that indicates due process has been followed. Click here to read more about the differences.]

Groups of the undocumented have formed Los Comités de Defensa del Barrio—Committees for the Defense of the Community—such as this one in Elizabeth. These committees hold underground meetings to teach people how to protect themselves, attempt to film ICE raids with phones, raise funds for legal services, perform skits to prepare people for encounters with ICE and the police, appeal to churches and cities to sign on to the sanctuary movement, hold demonstrations, use social media to monitor ICE movements and send out alerts about the latest raids, arrests and deportations.

Rosana, 53, is from Mexico and has lived in the United States for 27 years. She has two children. She works as a cleaner at banks.

“I am afraid to go outside,” Rosana says. “I go to work. I buy food. But, otherwise, I stay in the house. My husband is the same. He works as a night dispatcher for a taxi company in New York City. He sees ICE agents on the train. My children are terrified they will come home from school and one or both of us will not be here. This campaign is going to have huge economic and social consequences across the country. It will lead to the breakdown of the rule of law in many communities. No one will go to court. No one will go to the police. No one will buy anything. People are going underground. Parents won’t even show up for their children’s soccer games.”

“Trump can’t do anything he wants,” Rosana says to the group. “There are laws here. There is the Congress and the courts. They will defend us. Just because you do not have papers does not mean you do not have rights. In this country everyone has rights.”

“Still, people are afraid to come to these meetings,” Antonio says. “They fear that la migra will raid the meeting and take everyone. This is why a lot of people will not go to protests.”

“If we do not overcome our fear we will not be able to exert any pressure,” says Carlos. “We need to be educated. We need to have faith we can do something.”

The group members discuss a petition drive calling for Elizabeth to be a “sanctuary city.” They discuss joining May Day protests. They talk about mounting a campaign to obtain driver’s licenses.

“What will we do in June?” asks Rosana.

“If we survive May we can talk about June,” Carlos answers.

The meeting closes with the group singing the protest song “No Nos Moveran” [We Shall Not Be Moved].

[Click here to hear Joan Baez perform the song in concert. To see a translation of one version of the song, click here; “No Nos Moveran” is the 10th song from the top.]

I walk outside and sit on the front steps afterward with a father who because he has a pending asylum case asked that I not use even his first name. With us are his 9-year-old son and 15-year-old daughter. His own father, like thousands of other Salvadorans, disappeared during the civil war in the 1980s. His wife and daughter, after paying $6,000 to smugglers, were brought over the Mexican border. The man and his son, after being robbed of $6,000 by a smuggler, paid another one the same amount and crossed into the United States. The family was captured by the Border Patrol. They are free pending applications for asylum; the mother was forced to wear an electronic ankle monitor for several months.

“We had a food stall in the market [back in El Salvador],” he said. “The gangs demanded we pay $3,000. I did not pay this money. They threatened to kill me and rape my daughter. We sold all we had and fled.”

He takes out his phone and shows me a picture of his former food stall.

Read also:
The criminalization of immigrants from Clinton to Trump, by Aviva Chomsky, TomDispatch, April 25, 2017

‘You live under rear’: 50,000 Haitian people at risk of deportation from U.S., by Darlene Dubuisson and Mark Schuller, CounterPunch, April 27, 2017