The terrorist attack in Manchester 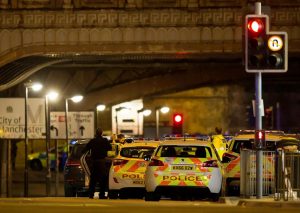 Terrorist attack in Manchester, England on May 22, 2017 (photo on The Independent)

After the Manchester attack, the UK is likely to respond, like the rest of Europe, by ramping up police state powers, surveillance, anti-immigrant policies, and military aggression in the Middle East, said political analyst Dan Glazebrook. “The real question we need to be asking: what is behind this huge global phenomenon?”

“It has to be said that unfortunately for the British government the carnage we saw in Manchester last night is nothing more than collateral damage from the policy which attempts to destroy the Arab world. For six years now the British government has openly supported the violent sectarian insurgency against the Syrian government, which has now morphed into what we call ISIS,” he told RT.

“When we see this kind of sectarian carnage in Manchester and many other places, we must never forget that this sectarian violence has been carefully and deliberately nurtured by the British government as part of its policy, as a strategy of destabilizing and destroying independent governments of the Middle East.”

European Commission chief Jean-Claude Juncker said in a statement following the attack: “Today we mourn with you. Tomorrow we will work side by side with you to fight back against those who seek to destroy our way of life.”

Britain is likely to respond “by ramping up of the police state powers of surveillance, and so on, given to the security services,” he said, adding that those are “the very security services…that have facilitated the flow of fighters from Britain to Syria.”

Secondly, Glazebrook went on to say, “there will be a ramping up of the militarization, of the anti-immigrant politics, that have sadly become the central feature increasingly of mainstream politics in the West.”

“Thirdly, we can expect to see ramped up military aggression in the Middle East and aggression, which increasingly is not aimed at ISIS, actually, but is aimed precisely at the forces fighting ISIS…The recent U.S. open attacks on Syrian government forces and their allies show the direction this is heading,” he said. ‘Terrorism will exist even in most perfect societies’

Security analyst Charles Shoebridge says a balance has to be struck between civil liberties and the need for security in “any kind of crowd situation,” such as a concert or a sporting event, shopping malls or train stations, as “all of these targets can result in mass casualties from this kind of attack.”

“The problem comes that if you put in place the kind of security that would prevent somebody getting into, for example, a concert venue with an explosive device. You simply displace the threat from inside the place that is being searched to outside or to target the queues people are forming for the event itself,” he continued.

Shoebridge believes that in a situation where “intelligence systems fail to the extent that an attacker can get through to his target, particularity, where it is a soft target without armed guards” and where “somebody is prepared to die in an attempt to kill people and himself… there is very little that can be done in terms of physical security to prevent that attack taking place.”

Despite recent attempts of boosting security measures across Europe, some of the biggest countries such as the UK, France and Germany are still on high alert and attacks keep happening. The security analyst said  “even in the most perfect of societies, that we can say don’t exist… the most benevolent of nations, there would still be people who want to carry out terrorist attacks.”

He added that countries will never get rid of terrorism completely. However, Shoebridge went on to say, there are many questions that need to be asked, including, “the extent to which the systems by which the security services operate needs to approve.”

“There will be people, politicians, the media, friends of the security services, MI5 in particular in this case, who will use this instance as they use all terrorist instances to call for yet for more powers more funding and resources for security services,” he told RT.

“This will not be a situation of a lack of resources for the security services, but rather, a question of how they make their decisions as to how they are operating and how quite substantial resources are actually deployed,” Shoebridge said.

The lack of a coherent anti-terrorism strategy in Washington and by extension the West, as emergency services deal with the devastating aftermath of yet another terrorist atrocity in Europe – this time a suicide bomb attack at a concert in Manchester, England – has been thrown into sharp relief during President Trump’s tour of the Middle East.

Specifically, on what planet can Iran be credibly accused of funding and supporting terrorism while Saudi Arabia is considered a viable partner in the fight against terrorism? This is precisely the narrative we are being invited to embrace by President Trump in what counts as a retreat from reality into the realms of fantasy, undertaken in service not to security but commerce.

Indeed, those still struggling to understand why countries such as the U.S., UK and France consistently seek to legitimise a Saudi regime that is underpinned by the medieval religious doctrine of Wahhabism, which is near indistinguishable from the medieval religious extremism and fanaticism of Daesh and Nusra in Syria – those people need look no further than the economic relations each of those countries enjoy with Riyadh.

The announcement that Washington has just sealed a mammoth deal with its Saudi ally on arms sales – worth $110 billion immediately and $350 billion over 10 years – is all the incentive the U.S. political and media establishment requires to look the other way when it comes to the public beheadings, crucifixions, eye gouging, and other cruel and barbaric punishments meted out in the Kingdom on a regular basis.

The sheer unreality of Saudi Arabia’s King Salman, as he stood shoulder to shoulder with President Trump during the latter’s state visit to the country recently, lamenting the chaos and carnage in Syria, which he described as having been “one of the most advanced countries” prior to a conflict that has wrought so much death and destruction, the sheer unreality of this is off the scale – and especially so considering the role the Saudis have played in providing material, financial, and ideological and religious support to groups engaged in the very carnage in Syria as has just been unleashed in Manchester.

There are times when the truth is not enough, when only the unvarnished truth will do, and in the wake of the Manchester attack – in which at time of writing 22 people have been killed and 60 injured – we cannot avoid the conclusion that neither principle nor rationality is driving Western foreign policy in the Middle East, or as it pertains to terrorism. Instead, it is being driven by unalloyed hypocrisy, to the extent that when such carnage occurs in Syria, as it has unremittingly over the past six years, the perpetrators are still described in some quarters as rebels and freedom fighters, yet when it takes place in Manchester or Paris or Brussels, etc., they are depicted as terrorists.

Neither is it credible to continue to demonize governments that are in the front line against this terrorist menace – i.e. Iran, Russia, Syria – while courting and genuflecting at the feet of governments that are exacerbating it – i.e. Saudi Arabia, previously mentioned, along with Qatar, Kuwait, and Turkey. Here, too, mention must be made of the brutal and ongoing injustice meted out to the Palestinians by an Israeli government that shares with the Saudis a doctrine of religious exceptionalism and supremacy, one that is inimical to peace or the security of its own people.

Ultimately, a choice has to be made between security and stability or economic and geopolitical advantage, with the flag of democracy and human rights losing its lustre in recent years precisely because the wrong choice has been made – in other words a Faustian pact with opportunism.

As the smoke clears, both literally and figuratively, from yet another terrorist atrocity, we are forced to consider how we arrived at this point. And when we do we cannot but understand the role of Western extremism in giving birth to and nourishing Salafi-jihadi extremism. Moreover, in the midst of the understandable and eminently justifiable grief we feel at events in Manchester, it behooves us not to forget the salient fact that Muslims have and continue to be the biggest victims of this terrorist menace, unleashed in the name of religious purity and sectarianism, and that it is Muslims who are also doing most to confront and fight it, whether in Syria, Iraq, Libya, or Afghanistan. It should not escape our rendering of the issue either that what each of those countries have in common is that they have all been victims of the Western extremism mentioned earlier.

It bears repeating: you cannot continue to invade, occupy, and subvert Muslim and Arab countries and not expect consequences. And when those consequences amount to the slaughter and maiming of your own citizens, the same tired and shallow platitudes we are ritually regaled with by politicians and leaders intent on bolstering their anti-terrorism and security credentials achieve little except induce nausea.

John Wight is the host of ‘Hard Facts‘ the weekly radio interview program on Sputnik International. The latest edition of the program, May 17, 2017, features a discussion with political commentator Marcus Papadopoulos on the election platform of the UK Labour Party. Britain goes to the polls in a national election on June 8, 2017.