Tens of thousands marched in Poland on Dec 12 against threats to democracy, constitution 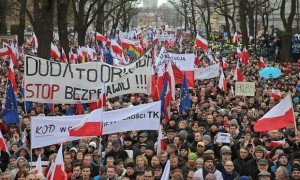 Tens of thousands of people marched through Warsaw and other cities in Poland on Saturday to protest against what they called the “democratorship” of the month-old conservative government, as Poland remained locked in a constitutional crisis. Waving Polish and European Union flags, the protesters chanted: “We want the constitution, not a revolution”, demanding that the government respect the rule of law.

The constitutional clash began when the Eurosceptic Law and Justice (PiS) party, which scored a landmark election win in October, appointed five out of 15 judges to the highest judicial body, in a move that the opposition described as illegal.

PiS denies the charge. It said judges in the constitutional court need to be replaced to ensure the balance of power in the body, and that it was the previous government that broke the law when they made the original appointments.

“Those appointments were made based on a faulty law,” the prime minister, Beata Szydło, said. “We are only fixing the law.”

Gaining control of the court is key for the party. It may determine whether PiS is able to implement its flagship policy plans, such as overhauling the retirement system and curbing foreign ownership of banks, moves the court could block.

“The current constitutional court is a stronghold of everything that’s wrong with Poland,” the PiS leader, Jarosław Kaczyński, told private broadcaster Republika. “All of our moves can be undermined [by it] in an arbitrary way.”

Critics say the government is emulating Hungary’s prime minister, Viktor Orbán, in trying to impose its political agenda by pushing the boundaries of democracy.
An opinion poll conducted for public television has showed that just over half of Poles believe democracy is under threat. The Saturday march was attended by non-partisan organisations and opposition parties.

“Today, it’s an assault on the constitutional court, tomorrow, it could be an assault on our freedom,” said Ryszard Petru, a former World Bank economist who now leads the pro-market Modern party, Poland’s fourth largest parliamentary force.

“This is Warsaw, not Budapest!” chanted the protesters. Smaller demonstrations took place in other cities.

Addressing criticism over its constitutional court agenda, PiS says it was the former government of the centre-right Civic Platform (PO) that broke the law.

PO passed a bill this year allowing the previous parliament to appoint five judges instead of the three it had been scheduled to elect in the 15-seat tribunal. But president Andrzej Duda, a close ally of PiS, failed to swear them in, opening the way for PiS to challenge their candidacies.

PiS scrapped the nominations, and its parliamentary majority elected five new judges, who were sworn in by Duda.

A lengthy fight could hurt Poland’s image as a model of post-communist transition.

Asked why she travelled over 60 miles (100km) to join the protest, retiree Grażyna Huzerowska said: “Because I remember the old times. In my family there were people, like my husband, who were in prison for fighting against communism. I see it’s starting all over … I think the Polish democracy is really in danger.”