Two news reports from TASS are enclosed. Note: The Trilateral Contact Group of the Minsk-2 ceasefire agreement of Feb. 12, 2015 comprises senior representatives from the government of Russia and the Organization for Security and Cooperation in Europe (OSCE). The Ukrainian government has delegated former Ukrainian president Leonid Kuchma to represented it indirectly. Representatives of the Donetsk and Lugansk republics participate in the working groups of the agreement. The groups are only partially functional.

MINSK, Belarus–The participants of the Contact Group on settlement of the situation in Donbass have agreed to cease fire by September 1, Ambassador Martin Sajdik, the Special Representative of the OSCE Chairperson-in-Office in Ukraine and in the Trilateral Contact Group on the implementation of the peace plan in the east of Ukraine, said Wednesday after the meeting. 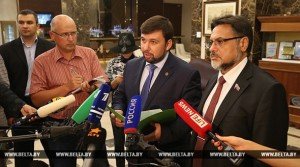 Denis Pushilin and Vladislav Deinego, representatives of Donetsk and Lugansk people’s republics to the Minsk-2 contact group in early August 2015

Sajdik said it is necessary to do everything possible to ensure security of schools on the disengagement line between east Ukrainian militiamen and Ukraine’s troops.

Plenipotentiary representative of the self-proclaimed Luhansk People’s Republic (LPR) Vladislav Deinego confirmed Wednesday after talks in Minsk that all participants of the Contact Group expressed the intention to achieve cessation of fire in Donbass by September 1.

“The proposal received a response from all sides, and there is hope that shelling will be stopped from September 1,” Deinego said.

In turn, plenipotentiary representative of the self-proclaimed Donetsk People’s Republic (DPR) Denis Pushilin stressed that “after the meeting in Berlin [of German Chancellor Angela Merkel, French and Ukrainian presidents Francois Hollande and Pyotr Poroshenko on August 24] we expected more”.

“Currently there is progress in the negotiating process, many constructive thoughts and proposals have been voiced. We have the hope that it will be put in writing. On the whole, I would like to say that there is progress and continuation of the working progress on all subgroups,” Pushilin said.

“As regards specific things, a rather balanced proposal to completely stop shelling by September 1 has been voiced. It won the support from nearly all parties,” he said.

Massive shelling of residential neighborhoods, including with the use of aviation, has killed thousands and led to a humanitarian disaster in east Ukraine since Kiev in April 2014 announced the start of an “antiterrorism operation” there, which involved the Armed Forces, the Interior Ministry’s National Guard and volunteer battalions made up of Euromaidan activists, many of whom hold far-right and neo-Nazi views.

Ukraine has regularly violated the ceasefire regime imposed as part of the Package of Measures on implementation of the September 2014 Minsk Agreements.

The Package (Minsk-2) was signed on February 12, 2015 in the Belarusian capital Minsk by participants of the Contact Group on settlement in Donbass. The package, earlier agreed with the leaders of the Normandy Four (Russia, Germany, France and Ukraine) envisioned an overwhelming cessation of fire and withdrawal of heavy armaments to create a security area in the region at least 50 kilometers wide.

The constitutional reform and decentralization of power in Ukraine were also among the document’s key provisions, just as establishment of working subgroups.

The situation in eastern Ukraine has deteriorated in recent weeks, with the number of reports on shelling and civilian deaths increasing. The Donetsk and Luhansk people’s republics have repeatedly said that the observance of the ceasefire that took effect February 15 depends solely on the Ukrainian side.

KIEV, August 26. /TASS/. Representatives of the Contact Group on the Ukraine crisis, meeting in the Belarusian capital Minsk on Wednesday, will discuss all aspects of ceasefire agreements reached in February, said Darya Olifer, spokeswoman for former Ukrainian President Leonid Kuchma, who represents Kiev at peace talks aimed at easing the conflict in the country’s east.

“Implementation of all components of the Minsk deal is on the agenda,” Olifer wrote on her Facebook page on Wednesday, adding that the Contact Group meeting would be preceded by negotiations between representatives of four working subgroups formed as part of the Contact Group.

The Trilateral Contact Group comprising senior representatives from Russia, Ukraine and the Organization for Security and Cooperation in Europe (OSCE) on February 12, 2015, signed a 13-point Complex of Measures to fulfil the September 2014 Minsk agreements.

The Complex of Measures (Minsk-2), earlier agreed in the Belarusian capital with leaders of Russia, Ukraine, Germany and France, envisaged a ceasefire between Ukrainian government forces and people’s militias starting from February 15.

This was to be followed by withdrawal of heavy weapons from the line of military engagement by at least 15 kilometres (9 miles), prisoner release and agreement for international observers to monitor the truce.

Based on September’s stillborn Minsk peace protocol, the deal also laid out a road map for a lasting settlement in Ukraine, including local elections and constitutional reform to give the war-torn eastern regions more autonomy.

Among the terms of the February 12 deal was a commitment to intensify the work of the Contact Group. Four subgroups, tasked with addressing security, political, economic and humanitarian issues, are expected to advance work by the Contact Group in activating elements of the Minsk deal.

The possibility of a new peace deal agreement that could improve the situation in Eastern Ukraine is off the table, says Ukraine’s president Petro Poroshenko, as a contact group meeting in Minsk ended with a proposal to ensure a stable ceasefire. The existing peace deal is good enough and simply needs to be implemented, said Poroshenko at a press conference in Brussels accompanied by European Commission President Jean-Claude Juncker.

The Trilateral Contact Group for Ukraine came to agreement to end all military operations and ensure a ceasefire along the whole contact line by September 1 at a meeting in Minsk on Wednesday. The matter is especially important now with the new school year just around the corner.

Information on the location of all educational facilities close to the contact line will be available to both sides, OSCE special envoy Martin Sajdik told journalists in Minsk. Moscow hailed the proposal.

“A very positive proposal to establish a real ceasefire by September 1 was put forward in Minsk. We would like to hope that this proposal will be implemented in practice. After all, we are talking about children,” Russian Foreign Ministry spokesperson Maria Zakharova said on Thursday, TASS reports.

Poroshenko in his turn said there was no reason to wait until September 1. “Who knows how many lives we will pay until … September 1,” he said, requesting an immediate halt in hostilities.

“We shall see if they will obey the ceasefire or not,” said Eduard Basurin, Deputy Head of the General Staff  of the Donetsk People’s Republic. “We haven’t been conducting warfare since February as we do observe Minsk agreement.”

The next meeting of the Contact Group and its working groups has been scheduled for September 8.

Poroshenko’s statement comes a week after he told his troops in the Kharkov region that the Minsk agreement had given Ukraine time to rearm and build up its defenses. “The Minsk agreement, despite all criticism, has given us time to build up Ukraine’s defense. It allowed us to partially bridge the gap in military capacity we have against Russia,” Ukraine’s leader said at the time.

Kiev continues to accuse Russia of providing the rebel forces with weapons and secretly invading the Donetsk and Lugansk regions. Moscow, however, has persistently denied those accusations and claims to be doing everything it can to help Ukraine get over the crisis.