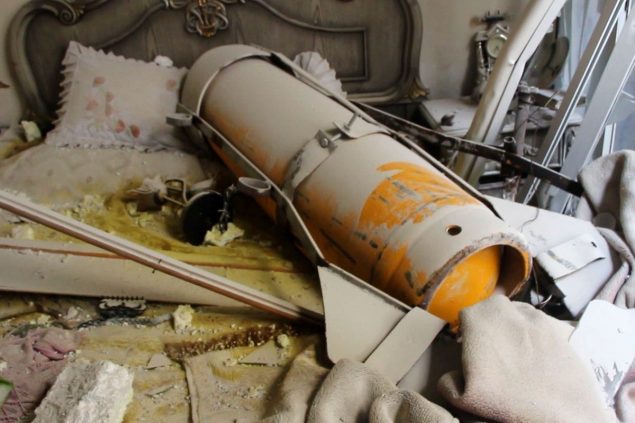 The mainstream media is repeatedly failing in its coverage of the OPCW “story” in Syria. But tying to turn the tables on claims of war crimes in Syria wouldn’t prove to be straightforward…

Continuing in efforts to get the OPCW fraud exposed to the Western mainstream media’s sheltered and blinkered audience, I recently had an opportunity to have an opinion article published in the Sydney Morning Herald. This followed a formal complaint to ACMA, Australia’s media overseer, over the failure of state broadcasters to report on the OPCW story. The proviso for this article was that the OPCW “story” needed to be linked in some way to current events in Syria, given its controversial nature.

This, of course, I readily accepted, because the very “humanitarian crisis” in Idlib predicted two and more years earlier was now eventuating, or at least in the minds of anyone following the Western MSM news output.

Linking this with what happened in Douma in April 2018 was no problem, and in fact was more than that, because had the lies about the “humanitarian crisis in Eastern Ghouta” been properly exposed at the time, along with the fake chemical attack, the course of the war would have been entirely different.

Now two years later, as the true extent of the deception is exposed, along with those who organised it in Westminster and Washington, Tel Aviv and Ankara, I had hoped that credible newspapers like the non-Murdoch SMH would consider dipping a toe in the water. Then at least they would be already swimming with it if the water came up rather suddenly, and be ready with some explanation or excuse on how they had been wrong or didn’t know.

It didn’t even need to be “wrong about Assad” – in the first instance, and before the penny dropped on the ramifications of corruption at the OPCW. As James Harkin “admitted” – Jaish al Islam ruled Douma with an Iron Fist, so the White Helmets had to do what they said, and were desperate for foreign assistance. It was all just a big misunderstanding, and Trump’s fault for launching a missile attack on an impulse.

So I wrote an article proposal, looking at the way that the “humanitarian crisis” predicted in Aleppo in 2016 and in Ghouta in 2018 had not materialised, and had in fact been prevented by the Syrian government’s setting up of humanitarian corridors to allow people to escape – to the safety of areas protected by the Syrian Army and Russian police. It was I said, the failure of Western media to report on what had actually happened that allowed yet another humanitarian crisis to be played as a cause for intervention once again.

Naturally and unavoidably I criticised those media for relying on unbalanced and unsavoury sources, and for providing platforms for “propagandumentaries” like For Sama. The awarding and release of this film to coincide with the campaign to liberate Idlib deserves a whole article of its own, as more doctors with photogenic young children now appear in the last hospitals in Idlib.

Criticism of Waad al Khatib and her Oscar-winning partners in East Aleppo could have been a mistake, but the critical role of the White Helmets in staging the “Chlorine attack” in Douma made this part of the essential context for a discussion on the OPCW story – which was, of course, the real focus of the article.

In declining to publish my article following consultations with the opinion page editor, and despite my assurances on the credentials of Ian Henderson, I was offered the following explanation: 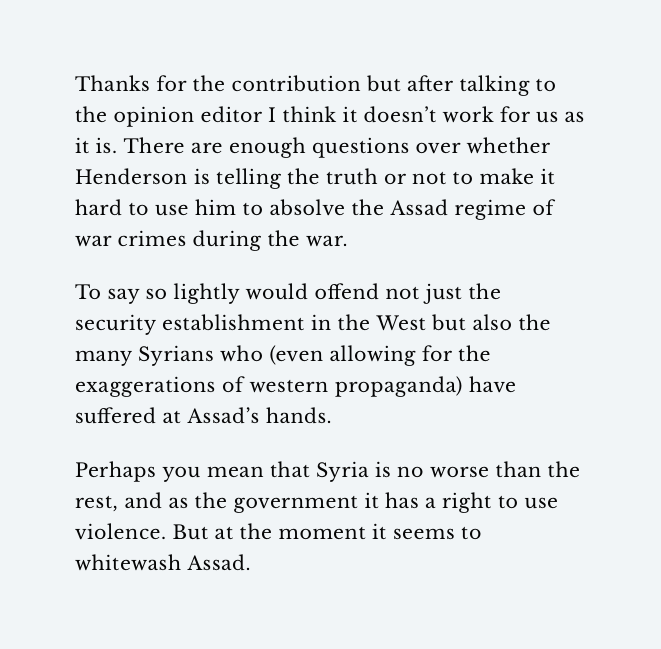 In fact I’d already concluded my views “wouldn’t work” for the SMH, after just reading their correspondent’s “Explainer” on the Syrian war and events that led up to the current crisis in Idlib. It didn’t explain anything to me, except why it was that I would never get an article published in this mainstream paper!

Almost every sentence in my article contradicted the accepted Western narrative expressed by the Herald’s correspondent, as here:

Assad, largely thanks to Russian air power, has subdued the rebels in most parts of the country, partly by bombing several of his own largest cities into oblivion and deploying chemical weapons against his own citizens.”

And this is what most people believe, with emotive propaganda and photos turning belief into a conviction which evidence and reasoning is unable to dislodge. The SMH article above devoted as much space to a photo of a blond-haired child sitting in a bus as it did to the ‘explainer’, along with the title – “Sequel to a real-life horror show”.

Such propaganda has worked not just on the audience but on the editors of our media, as it has also done on most of the refugees living in Turkey. They fled because they were told the Syrian Army was coming after them, and they now believe they are in danger of retribution if they were to return. The idea that the Syrian Army and its partners are fighting and dying to kill the terrorists so that it will be safe for Syrians to come home is probably not one they can believe.

In deference to the editor of the Herald, I welcomed his willingness to consider my views and some of the evidence supplied in links. That he did is clear from his recognition that “using Henderson’s claims” should not be taken lightly as “it could absolve Assad of war crimes”. Which of course was my very point.

While OffGuardian remains something of a “Salon des Refuses” to republish opinion unacceptable to the mainstream, it is more useful to repaint this dispute over the OPCW’s toxic deception as a question of “whose war-crimes”. As far as we – on Syria’s side – are concerned, all the war-crimes committed in Syria are attributable to the aggressors who started and fuelled the war on Syria, including all those cases where civilians have been victims of Syrian or Russian airstrikes.

Both militaries have gone to great lengths to avoid hitting civilians where they can be identified, despite the incessant stream of claims to the contrary. An integral part of this effort has been to provide and protect humanitarian corridors for civilians to escape, and many or most of the trapped residents have bravely resisted the insurgents’ threats and propaganda to do so.

There is little verifiable evidence of civilian deaths from Syrian bombing however, as confirmed by the White Helmets’ evident need to fake such deaths for their rescue videos. At the centre of the Douma hoax chemical attack were the contorted bodies of 35 women and children, whose murder for a propaganda video is certainly a war-crime. At the same time the number of civilians killed by the terrorist groups in missile and bomb attacks aimed at residential neighbourhoods now numbers in the hundred-thousands.

The difficulty in persuading people – even reasonable and sympathetic people – of this evident truth on who is responsible for the worst war-crime of this century – the war of aggression on Syria – is illustrated by another group discussion in which I have been involved this week.

On one side are those who believe that President Bashar al Assad is basically a good person who has not, and would not intentionally kill “his own people”, and of course would never and never did use chemical weapons against them, (or even against terrorists for that matter). One of our group, still recovering from the pleasure of meeting Assad last year, dared to refer to him as “wonderful”.

Despite all the contributors to this discussion claiming opposition to all US foreign interventions and regime-change wars and NATO support for extremists and tyrants, some simply cannot stomach such admiration for a man “who has killed civilians”, and no amount of argument or evidence will counter their belief that he has.

It is as though the very first events in the so-called uprising – the false-flag shootings in Dera’a – made an indelible mark on those who believed them, and believed the false story of “Assad’s brutal crackdown on protestors”. And as long as they believe this, the responsibility for Syria’s dead can be shifted and shared, and one day their alleged culprits will be brought to “justice” – in Western courts.

Perhaps there is no answer to this dispute, where even those who are potentially most sympathetic to the Syrian cause cannot be persuaded of its most essential character – that the Syrian army and its allies have fought a war of self-defence since the start; a “just war” which even the most anti-war activists should accept as legitimate. So rather than pursue this hopeless quest, we should turn on the offensive.

Instead of denying claims that Assad used chemical weapons in Douma, in Khan Shaikoun, and in Ghouta we must demand evidence and proof that he did so, because there is none. We could follow the style of Vassily Nebenzia, expressed so well at the start of this UN session (embedded above) on the OPCW fraud, as he mocks the “highly likely” standard of proof Syria’s enemies pretend is sufficient as a casus belli.