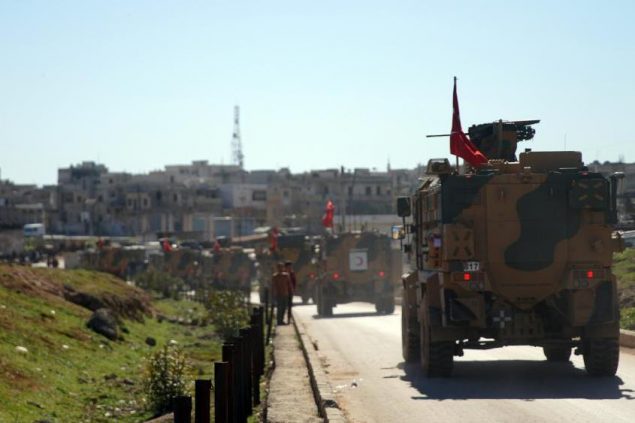 Turkish forces move in the de-escalation zone in Idlib province Friday as part of a peace deal with Russia in the Syrian rebel stronghold. Photo by Yahya Nemah/EPA-EFE

Russian and Turkish forces have carried out a second joint patrol of 160 km in northern Syria, starting in a village near the border town of Kobani.

On November 5, Russian and Turkish forces carried out a second join patrol in northern Syria. According to the Russian Defense Ministry’s Zvezda TV channel, the patrol started in the village of Alishar near the border town of Kobani and covered 160km. 50 Russian and Turkish personnel and at least eight units of military equipment (Tigr and Kipri armoured vehicles) were involved.

The presence of Turkish forces in northern Syria cause sporadic protests by locals linked with the Kurdish-led Syrian Democratic Forces (SDF). They threw rocks at the vehicles and even tried to block the patrol near Kobani. It remains unclear what SDF-linked elements were seeking by protesting against the implementation of the ceasefire regime under the Turkish-Russian safe zone agreement. It is unlikely that they want the resumption of the Turkish military operation.

Pro-Damascus sources suggested that at least some of them tried to provoke Turkish or Russian troops in an attempt to stage a provocation that can be used by the SDF leadership and its foreign backers in their own political games.

Despite the Turkish-Russian patrol, sporadic clashes between the SDF and Turkish-backed militant continued along the M4 highway east of Ayn Issa. According to pro-SDF sources, at least one military vehicle belonging to the Turks were destroyed.

The Syrian Army has continued deployment of troops, heavy equipment and even artillery in northeastern Syria, near the Turkish border. Just recently, government troops strengthened their positions near the town of Al-Malikiyah.

Meanwhile, the US military is reportedly preparing to set up to establish a new large military facility in the Soor area in Deir Ezzor province. According to media reports, the US already deployed there a large number of construction elements, heavy equipment and additional troops. This as well as other actions by the US military in eastern Syria demonstrate that the announced withdrawal of troops from the country is just a PR move for the ongoing redeployment of forces from one area to another.