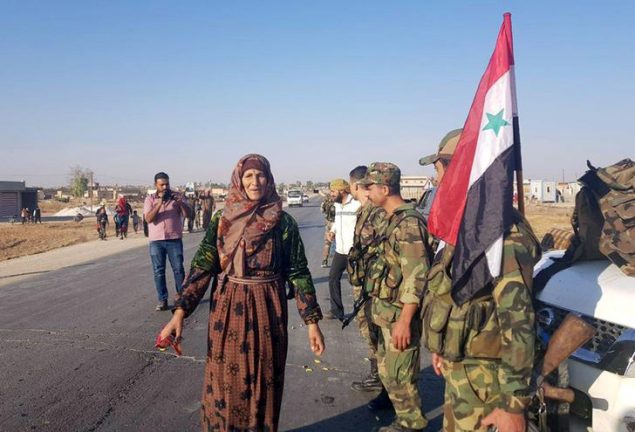 Syrian army soldiers are seen in the town of Tel Tamer in northeast Syria, in this handout released by SANA on October 14, 2019. SANA/Handout

It’s been eight days since U.S. President Donald Trump gave a green light for the Turkish military to invade Syria. MofA explains why that move has made it inevitable for the Kurds to submit to Damascus and to let the Syrian Arab Army back into northeast Syria.

Eight days ago U.S. President Donald Trump gave a green light for another Turkish invasion of Syria. We explained why that move made it inevitable for the Kurds to submit to Damascus and to let the Syrian Arab Army back into northeast Syria:

While the YPG might want to fight off a Turkish invasion they have little chance to succeed. The land is flat and the YPG forces only have light arms.There is only one solution for them. They will have to call up the Syrian government and ask it to come back into the north east. That would remove the Turkish concerns and would likely prevent further Turkish moves.

After Trump had spoken with the Turkish president Erdogan, the U.S. military removed a few of its forces from some areas near the Turkish border. The Pentagon was still under the false impression that Turkey would limit its invasion to some 5 kilometer in depth. It was obvious, as we wrote, that Turkey wanted far more:

A major goal is to interrupt the M4 highway that runs parallel to the border and allows for troop movements between the east and the west of the Kurdish majority areas. The highway is about 20-30 kilometers from the border.

The M4 road is also one of the major logistical routes for the U.S. troops stationed in the western part.

The Kurds could do little to resist the Turkish onslaught. On Saturday Turkish supported “Syrian rebels” reached the M4 highway and captured and killed several Kurdish troops and civilians who were passing by. The Pentagon finally took notice of the imminent danger:

“This is total chaos,” a senior administration official said at midday, speaking on the condition of anonymity about the confusing situation in Syria.Although “the Turks gave guarantees to us” that U.S. forces would not be harmed, the official said, Syrian militias allied with them “are running up and down roads, ambushing and attacking vehicles,” putting American forces — as well as civilians — in danger even as they withdraw. The militias, known as the Free Syrian Army, “are crazy and not reliable.”

Ahhhh. The “Free Syrian Army”, which the U.S. built and supplied with an immense amount of weapons to fight the Syrian government, is “crazy and not reliable”. How come that all the think tankers and ‘journalists’ who for years lauded that ‘army’ never noticed that?

The Pentagon finally recognized that it was not possible to hold onto the area without starting a war with its NATO partner Turkey. On Saturday evening Trump gave the order that all U.S. troops shall leave northeast Syria within 30 days. The Secretary of Defense did not resign as his predecessor did over a similar decision but defended the move.

The decision was the kick in the ass the Kurds needed to agree to the return of Syrian government troops to the area they had held on to while under U.S. command. Currently Syrian troops and their heavy weapons are streaming in. Their primary task is to prevent any further encroachment by Turkish forces. They will also move to retake the oil fields east of Deir Ezzor and they will take control of the prison camps where ISIS fighters are held. 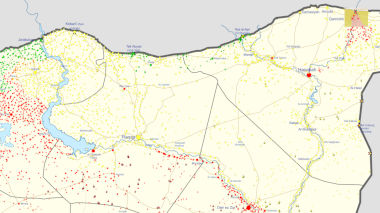 bigger
As of this writing Syrian troops (red) have entered Manbij, Ain al Issa, Tabqa airbase near Raqqa and Tel Tamr. Turkish supported groups (green) hold Tell Abyad and Ras al-Ayn and the villages between those two cities. That area has an Arab majority population.

The Kurds wish to keep their ‘autonomous administration’ of northeast Syria. While talks are still ongoing I do not expect that the mostly Arab inhabitants of the whole area, nor the Syrian government will agree to that. There can not be a special status for any of Syria’s many ethnic or religious groups.

The Kurdish led Syrian Democratic Forces will be disbanded. Its soldiers will be integrated into the Syrian army. The Syrian government will also disband the ‘autonomous’ Kurdish administration. It will confiscate the weapons the U.S. has given to the Kurds. All this will take some time but it will, in the end, remove the Turkish concerns that the organized Syrian Kurdish groups could enter Turkey to fight on the side of  their PKK separatist brethren.

The U.S. had more than 1,000 troops in northeast Syria. There were also several hundred French and British special forces and some 2,000 U.S. contractors. They, and a huge amount of equipment, are now moving out. They have nothing to fear from the Syrian forces. Syria is happy to see them leave. (Reports that the U.S.yesterday bombed Syrian troops are false.)

The strategic plan behind last week’s development must have come from Moscow. Russia has tried for some time to get Turkey into its camp. Russia, Iran and Syria allowed Turkey a limited invasion of Syria to scare the U.S. out. Russia largely supported the Turkish move but it will also set its limits.

Trump has been looking for a chance to move the U.S. troops out of Syria since December 2018. The borg made that politically unfeasible. The Turkish (Russian) move gave him the excuse he needed.

It is possible that the whole arrangement was made for exactly that purpose.