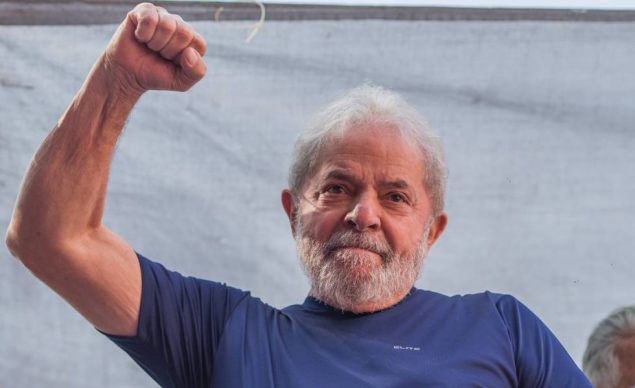 The Brazilian Supreme Court has decreed that imprisoning defendants, such as former President Luiz Inácio Lula da Silva, before their appeals process has been exhausted, is illegal.

Last night (11/8/2019) the Brazilian Supreme Court upheld the principal of innocent until proven guilty from the 1988 Constitution and ruled that it is illegal to imprison defendants until their appeals process has fully played out. The decision effectively reverses a ruling from April 5, 2018.

That ruling – made the day after General Vilas Boas’ threat to the Supreme Court was read over the air on Brazil’s most popular news program Jornal Nacional by anchorman William Bonner – opened an exception to the law to enable the imprisonment of former President Luiz Inácio Lula da Silva, who was leading all polls for the presidential election at the time. On the morning following the threat,  a visibly shaken Supreme Court Justice Rosa Weber announced that she would cast her tie-breaking vote against her beliefs. Lula was jailed 2 days later.

This time around however, Justice Weber did not bow to pressure. During the speech justifying her vote (cast in the previous court session, two weeks ago) she quoted Angela Davis, who has repeatedly spoken out for freedom for Lula, saying, “incarceration is the negation of freedom”.

During Justice Dias Toffoli’s long, tie-breaking speech last night, he repeatedly drew attention to partisanship in the public prosecutors office and abuse of authority committed by “certain judges”. On several occasions, he was interrupted by Justice Gilmar Mendes, who specifically spoke of the leaked Telegram messages revealed by Glenn Greenwald and the Intercept, which show illegal collusion between disgraced former judge and current Justice Minister Sérgio Moro with the Lava Jato public prosecutors, the federal police and big media companies. By doing this, Mendes rendered the Telegram leaks a matter of public record within the Supreme Court.

Upon hearing the verdict, millions of Lula supporters across the country broke into cheers. Some lit off fireworks. As this article goes to press, thousands of people are traveling from across the country to the Lula Livre Vigil in Curitiba, where supporters from the labor unions and the Landless Rural Workers Movement (MST) have been camped out yelling good morning and good night to the former President ever day since he was arrested last April 7th.

Upon hearing the verdict, Lula’s defense team issued a statement, saying, “The judgment concluded today by the Federal Supreme Court, reinforces the fact that Lula has been imprisoned for 579 days unjustly and in a manner that is incompatible with the law (CPP article 283) and the Constitution of the Republic (Article 5 LVII), as we have always argued. After meeting with Lula this Friday will will submit a request to the judge that he be immediately released […]We will also reinforce our request to the Supreme Court that it immediately review our request for the habeas corpus which aims to annul the entire procedure which led to his imprisonment, in virtue of suspicions against ex-judge Sérgio Moro and the Lava Jato prosecutors, among numerous other irregularities.”

As a groundswell builds in support of Lula’s immediate release, Bolsonaro supporters have initiated a fake news campaign using the WhatsApp social media app. Starting immediately after Toffoli’s ruling, millions of working class Brazilians were bombarded with messages erroneously claiming that it means all of the rapists in Brazil will immediately be released from prison.

Every day that Lula spends behind bars now constitutes a crime committed by the Curitiba court system. Nevertheless, Judge Juliana Lebbos, who has broken the law repeatedly in denying basic human rights to Lula during his 579 days in solitary confinement, is expected to do everything she can to slow down the process of Lula’s release. Although many hope that the former President will be released today in Curitiba, Judge Lebbos is expected to argue that she cannot release him until the Supreme Court officially publishes its ruling, which may not happen until early next week.