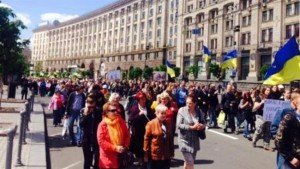 Protest in Kyiv against soaring utilities prices, May 16, 2015 (Press TV)

Ukraine is in the midst of a financial crisis as it struggles to cope with the fallout from Crimea’s annexation by Moscow and continuing war with pro-Russian separatists. The International Monetary Fund and other western backers have pledged support, but without a debt restructuring deal, Ukraine is likely to default — destabilising the state and reshaping geopolitical relations between Russia and the West.

Below are four charts that explain what is happening in Ukraine and why it matters to the rest of the world.

Ukraine’s economy is in tatters

Ukraine was already mired in an economic slowdown when the bloody, pro-Europe Maidan revolution led to the former government’s dramatic collapse in early 2014.

The events that followed, including Russia’s annexation of a swath of land in the south and fighting with pro-Russia separatists in the east, have deepened the recession, sending Ukraine’s currency — the hryvnia — plunging while debt has jumped to 100 per cent of GDP. [See chart showing the fall in the exchange value of the Ukrainian hryvnia during the past year, from 1 UAH=8.2 cents to 4.6 cents.]

The IMF has stepped in with a $40bn rescue deal, but one that depends on co-operation from private creditors, one of whom is Russia…

Debt payments are coming up fast

In total Ukraine wants to restructure $15.3bn as part of the IMF’s $40bn rescue it says the country needs to plug the gaping hole in its finances. Kiev has included a number of bonds held by state-backed organisations in addition to sovereign bonds in order to spread the pain a little.

But after months of negotiation with creditors no deal has been forthcoming.

So far, Ukraine has repaid all of the interest owed and has made deals with investors to extend maturing owed by state-backed companies. [See chart of Ukraine’s required debt repayment schedule, source IMF.]

Meanwhile, the money is running out

Ukraine is suffering from a widening current-account deficit and the IMF expects the economy to contract by 9 per cent this year as g as payments, debt servicing, war in the east and a massive depreciation of the hryvnia bleed reserves dry.

After foreign exchange reserves fell to a low of $5.6bn in February, the country received a tranche of funding from the IMF boosting its coffers, but the collapsing economy means that the burden of its debt is growing larger by the day and it is still waiting for the next tranche of IMF funding to arrive. [See chart of the Ukraine’s steep decline in foreign exchange reserves from 2011 to 2015.]

Ukraine is not Greece

One of the peculiarities of the debt crisis in Ukraine is the relatively low level of external debt the country had to begin with. At the end of 2013 Ukraine’s debt was equal to 40 per cent of its annual economic output — compare that to 175 per cent debt to GDP in Greece.

Economic turmoil means debt is now equal to more than 100 per cent of GDP. Ukraine says its debt is unsustainable and wants investors to accept a 40 per cent writedown. But creditors argue that Ukraine’s problems are temporary and that the country just needs time for its economy to recover. [See chart of Ukraine’s rising debt-to-GDP ratio.]

But it could pose a greater threat to stability

Ukraine has a long and painful history as a border between east and west and the outcome of the current crisis could define an already uneasy relationship between Europe and Russia.

While a Greek default and exit from the eurozone could endanger the future of the euro project, default and economic collapse in Ukraine could open the door for prolonged regional conflict.