The Strangelovian palaver of Russia-gate is embraced by many liberals as some totem to ward off the vile Donald Trump, but this dishonest process only furthers the cause of American Empire and risks global destruction. 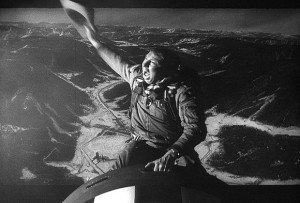 The effects of humankind-created climate chaos are proving to be more devastating than even the grimmest predictions. Today’s wealth inequity is worse than in the Gilded Age. Meanwhile, around the world the U.S. empire wages perpetual war–hot and cold, overt and covert–including military brinksmanship with the nuclear power, the Russian Federation.

Speaking of Russia, the U.S. media retails a storyline that would be considered risible if it was not so dangerously inflammatory: Russia-gate. According to the lurid tale, the sinister Vladimir Putin, applying techniques from the Russian handbook for international intrigue–Rasputin Mind Control For Dummies–has wrested control of the U.S. Executive Branch of government and bends its policies to his diabolical will.

Ridiculous, huh? Yet the mainstream press promulgates–and a large section of the general public believes–what is clearly a reality-bereft tale, all the while ignoring circumstances crucial for their own economic well-being–that is, their safety against a catastrophic nuclear exchange and the steps required to maintain the ecological criteria crucial for allowing the continued viability of human beings on planet Earth.

A socio-cultural-political structure is in place wherein the individual is bombarded to the point of psychical saturation with self-serving, elitist manufactured media content. Decades back, news and entertainment merged; freedom of choice amountied henceforth to psychical wanderings in a wilderness of empty, consumer cravings and unquenchable longings. Moreover, personas are forged upon the simulacrum smithy of pop/consumer culture in which image is reality, salesmanship trumps (yes, Trumps) substance. Among the repercussions: a reality television con man gains the cultural capital to mount a successful bid for the U.S. presidency.

Trump’s ascendency should not come as a shock. Nor should desperate Democrats’ embrace of ‘Russia-gate/The Russians Are Coming’ mythos. In essence, U.S. citizens/consumers are the most successfully psychologically colonized people on planet Earth. In the realm of the political, Democratic and Republican partisans alike, on cue, are prone to parrot the self-serving lies of their party’s cynical elite, who, it is evident by the utter disregard they hold towards the prerogatives of their constituency, view the influence-bereft hoi polloi with abiding disdain … that is, in the rare event they regard them at all.

The crucial question is: Whose and what agenda does the Russia-gate yarn serve? The answer is hidden in plain sight: the profiteers of U.S. economic and militarist hegemony. The demonization and diminution of Russian power and influence is essential in order to maintain and expand U.S. dominance and the attendant maintenance and expansion of the already obscene wealth of capitalism’s ruling elite.

While it might seem we are mired in an (un-drainable) swamp of complexity, in reality, the political landscape is a bone-dry wasteland, wrought by a single factor — the addictive nature of greed.

Moreover, the reality of Beginning Stage Human Extinction crouches just beyond the line of the horizon. All signs auger, we lost souls of the Anthropocene must alter our course. Yet, we, stranded in the mind-parching wasteland of late-stage capitalism, collectively, continue to stagger, mesmerized, towards mass media mirages leading us further and further into the hostile-to-life terrain.

The wasteland’s Establishment media outlets are doing a dead-on, although straight faced, impression, right out of Stanley Kubrick’s satirical film of Cold War era madness, Dr. Strangelove, of Brigadier General Jack D. Ripper’s roiling with paranoia ranting about a Russian “conspiracy to sap and impurify all of our precious bodily fluids.”

Hyperbolic? Take at perusal at the cover story of the Washington Establishment mouthpiece Newsweek, headlined: “PUTIN IS PREPARING FOR WORLD WAR III — IS TRUMP?”

A sphincter-clinching tale of woe and warning promulgated by the same governmental entities and their corporate media stenographers who waxed apocalyptic about Iraq possessing weapons of mass destruction; that an immediate NATO bombing campaign must be launched against the government of Muammar Gaddafi or else a mass slaughter of the innocent would be imminent; and regime change in Syria must proceed because Assad is gassing his own people.

Just what sort of an embittered cynic would call into question the credibility of and mistrust the motives of such paragons of probity? Yet, somehow, in regard to Russia-gate, liberals display scant-to-zip skepticism towards the stories peddled by this unelected, unaccountable clutch of hyper-authoritarian prevaricators. In fact, they are, in a cringe-worthy spectacle, allowing themselves to be played like Dollar Store kazoos.

Although, I get it. The tangerine-tinged Terror Of Tweet-town represents a hideous affront to common sense and common decency. But the same applies to his antagonists in the anti-democratic institutions of the U.S. National Security State and Intelligence Community. While the mission statements of the bureaucracies in question declare they exists to protect the nation from all manner of threats to the safety of the citizenry, a study of their history and present-day operations reveals their modus operandi serves to ensure obscene amounts of wealth continuing to sluice into the already bloated coffers of the profiteers of global-wide operations of capitalist plunder.

I understand the desperate need for hope. To crave the quality is inherently human. Even to the point of being whipped into a tizzy by the Russia-gate imbroglio. Yet: All and all, an obsessive focus on Trump, the Orange Scylla, buffets one into the maw of the Washington Establishment’s Charybdis.

Again, I understand the sense of desperation: Trump’s smug, bloated face, the grandiose squawk of his voice, and his crass, mean-spirited, petty-minded pronouncements and middle-school bully taunts deserve to be resoundingly rebuked. His hubristic posturing simply begs for comeuppance. One is prone to grow plangent with magical thinking. One longs to witness the bully smirk smacked from his face as he is dispatched in disgrace, Richard Nixon-style, to his parvenu palace at Mar a Lago.

But the effect of banishing Nixon was cosmetic. The accepted Watergate storyline of probing, political inquest and Constitutional redemption served as a palliative administered to the U.S. public in the rare case the slumbering masses might have desired to delve deeper into the heart of darkness of U.S. empire and thus might begin to question the mythos of American Exceptionalism and doubt the uplifting denouement cobbled onto the scandal by the political and media elite, e.g., the system of checks and balances functioned as the nation’s Founders intended. Granted, the system did work as designed, only not in the cliched manner portrayed by its apologists; it worked in the manner in which it was rigged, to wit, to preserve the secrets of state. The long national nightmare was far from over. In fact, it has been normalized.

When the unthinkable becomes quotidian, by means of the normalization and systemic codification of crimes against the greater good of humanity, there is a good chance the dynamics of empire-building are in play. Empires are not only inherently entropic but they are anathema to the democratic processes crucial to maintaining a republic.

The vast amounts of wealth acquired by means of plunder render a nation’s elite not only craven with cupidity but prone to become so dismally shortsighted, even, judging by the evidence of their reckless actions and crackbrain casuistry, bughouse mad. The present U.S. nuclear saber- rattling at North Korea and the economic aggression and militarist posturing deployed against the Russian Federation are proof of the declaration. A military empire’s unchecked, monomaniacal, more often than not self-destructive, impulse for domination are monstrous traits. The death and carnage strewn in the wake of the imperial monster’s presence in Libya and Syria illustrate a grim testament to the fact.

History reveals, overreach and the passage of time renders the aspirations of imperium a nimbus of dust; its grandiose pronouncements a cacophony of strutting clowns; its belief in its inviolable nature and its trumpeted tales of vaunted exceptionalism the stuff of asylum-dweller gibbering. On the contrary, a sense of perspective imparts the knowledge, late empire is a fool’s inferno played out on a landscape ridden with exponentially increasing decay.

The storylines of the beneficiaries and operatives of vast systems of runaway power concoct are, more often than not, self-justifying fictions. Cover stories and flat-out prevarications, rolled out for the purpose of hiding the prevailing order’s actions and motives, come to dominate the socio-cultural-political sphere. Views running counter to reigning narratives are apt to be marginalized and/or met with scorn, rage and revulsion. A dangerous one-sidedness prevails.

Analogous to the laws governing thermodynamic equilibrium, when a governor (or speed limiter or controller) switch has been rendered inoperative, a state of thermic runaway comes into play. We are talking the stuff of runaway trains, flaming out super novas, nervous breakdowns, and overreaching empires. By suppressing countervailing views, empires create chaos and carnage and will, in the end, meet their demise by self-annihilation. The rage for total dominance and attendant overreach of capitalist/U.S. militarist hegemony has wrought the phenomenon on a global-wide basis.

The governor switch within the greed and power crazed minds of the corporate, military, and governing elite, by all indications, is inoperable. Impervious to the consequences of their recklessness, ranting about Russians, they careen through the Anthropocene. At present, the whole of humankind is held in the thrall of a trajectory of doom. Yet their power is hinged on the ability to dominate the storyline.  Withal, complicity translates to destiny usurped. Conversely, the first measure towards a restoration of equilibrium is to call out a lie.

Phil Rockstroh is a poet, lyricist and philosopher bard living, now, in Munich, Germany. He may be contacted: philrockstroh.scribe@gmail.com and at FaceBook: http://www.facebook.com/phil.rockstroh.

The journalism at Consortium News is made possible through donations from readers. Contributions go directly to support the production, editing, and dissemination of original journalism. Consortium News does not receive corporate/government sponsorships and does not sell advertisements. It holds three fund drives each year.

When you donate to Consortium News, you are investing in ethical journalism. Contributions from readers provide compensation to contributing writers for original works of journalism and to fact-checking and editorial work. Consortium News‘ articles are frequently circulated to other independent news websites, bolstering the availability of strong, journalistically-sound content across the internet.

Consortium News is a 501(c)(3) nonprofit and donations by U.S. taxpayers are fully tax-deductible to the extent of the law. To donate, click here.