Jan 4, 2016–The following two statements are published in the New York Review of Books online and in the print edition of January 14, 2016.

To the Editors of the New York Review of Books:

Poland has no significant Muslim population. Nevertheless, amid controversy over European refugee policy, anti-Muslim rhetoric emerged as a major feature of the Polish parliamentary election campaign this fall. The victors in the October 25 vote, a populist, nationalist-right party called Law and Justice, promoted xenophobia on a scale unseen in Poland since the fall of communism in 1989. During the campaign, the Law and Justice leader, the former prime minister Jaroslaw Kaczynski, attacked immigrants for carrying “various parasites and protozoa, which don’t affect their organisms, but could be dangerous here.” Social media and the far right press also promulgated anti-Muslim slogans and images. One magazine cover featured a photoshopped picture of the then Polish Prime Minister Ewa Kopacz clad in a burqa and holding explosives. 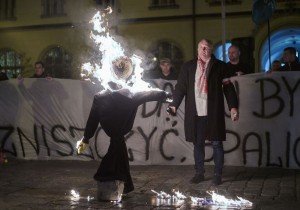 Protesting against the immigration of Muslims and Syrian refugees, demonstrators in Wroclaw on Nov 18, 2015 burn an Orthodox Jew in effigy (Reuters)

Several massive anti-refugee protests followed. Protesters have held marches, burned EU flags, and chanted nationalist slogans. In a number of Polish cities, gangs have beaten up or taunted dark-skinned “Arab” students or tourists; one victim was a Sikh entrepreneur. On November 18, in the city of Wroclaw, a far-right group staged an anti-immigrant demonstration and—moving rapidly from one form of racial intolerance to another—burned an effigy of an Orthodox Jew.

Yet neither these groups nor Kaczynski speaks for the majority population. The mayor of Wroclaw instantly condemned the demonstration, as did many others. The Polish Catholic Church has called on individual parishes to accept the beleaguered regardless of their religion, reminding Poles of their “Christian duty to help refugees.” Former Polish President Lech Walesa has denounced the new ruling party’s chauvinism, and asked that Poles do the maximum they can to help the disenfranchised now pouring in from the war-torn Middle East. The attached statement, from the Polish PEN Club, is an urgent protest against the events in Wroclaw and, more generally, against the shift in public rhetoric in Poland.

Following a long series of physical and symbolic acts of racist violence in Wroclaw and other Polish cities, a group of extreme nationalists burned a figure of a Jew in the Wroclaw central square. This was a neo-Nazi death sentence in effigy, an attack on the image of an imaginary convict. The main perpetrator of this act was until recently one of the closest colleagues of a member of the Polish parliamentary special services committee, who is the leader of a parliamentary party.

Genocide is not part of the tradition of Polish Wroclaw. It belongs rather to the traditions of a different Wroclaw, the city that was the most strongly pro-Nazi in the Third Reich. If Wroclaw wants to aspire to become a European Capital of Culture, and not a “KuKluxKland,” it must quickly come to terms with this disgrace.

We express our support for the position taken by the mayor of the city of Wroclaw, who demanded that law enforcement officials react immediately. We appeal to the highest authorities of the republic to bring a halt to the increasingly open acts of racist violence that are taking place in Poland.