State of siege in Kashmir: a warning to the international working class 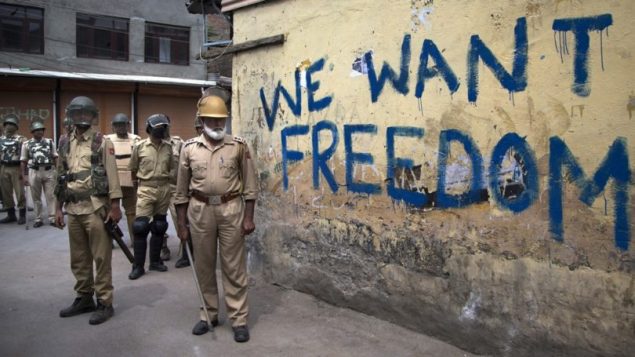 Despite Kashmir having a population greater than those of entire European countries such as Belgium, Greece and Portugal, or, for that matter, major US states such as Pennsylvania, Illinois and Michigan, the autonomous state has been subjected to a “security lockdown” that has included blanket curfews, keeping people caged in their homes with dwindling supplies of food.

Thirteen million people in Indian-controlled Jammu and Kashmir (J&K) have spent the last 13 days under a regime of extraordinary repression and collective punishment at the hands of India’s Hindu supremacist Bharatiya Janata Party (BJP) government. These actions have few—and historically infamous—precedents.

A population that is greater than those of entire European countries like Belgium, Greece and Portugal, or, for that matter, major US states such as Pennsylvania, Illinois and Michigan, has been subjected to a “security lockdown” that has included blanket curfews, keeping people caged in their homes with dwindling supplies of food.

Freedom of speech and assembly have been abolished, with gatherings of more than four people outlawed. Critics who have denounced the repression to the media have been imprisoned. Public transport has been shut down, and the region’s economy has ground to a halt.

The Indian government—routinely described as the world’s largest democracy—has carried out the “preventive detention” of many of the politicians of J&K, which is the Indian-controlled part of the larger region of Kashmir, which has been divided since the reactionary communal partition of the subcontinent into a Muslim Pakistan and a mainly Hindu India that accompanied independence from Britain in 1947. The disputed territory has been the flashpoint for two wars and numerous war crises between what are now nuclear-armed rivals.

More than 500 people, including two former chief ministers of Jammu and Kashmir and dozens of other prominent political figures, have been summarily detained, with their families unable to find where they are imprisoned. Many have been transported by military planes to jails outside the region. The same fate has been reserved for “potential stone-pelters”, i.e., individuals who are known to have participated in previous anti-government demonstrations.

Completing this regime aimed at holding an entire population in subjugation, the Indian government has cut off all communications, including land lines, cellphone service and the internet, making it impossible for anyone to speak with their relatives, friends and co-workers, much less utilize social media to organize resistance.

Tens of thousands of additional Indian troops have been flown into the region to enforce this mass repression, which was sprung on the Kashmiri population on August 5 without any warning. The government of India’s fascistic BJP Prime Minister Narendra Modi implemented the crackdown to preemptively quell any opposition to what amounted to an extra-constitutional coup. Through executive fiat, the government illegally stripped Jammu and Kashmir—India’s only Muslim majority state—of its special, semi-autonomous constitutional status, and split it into two subordinate entities, Union Territories that are to be effectively run by the central government.

Any hint of resistance to the crackdown has been met with brutal repression. On Thursday alone, doctors at one of the main hospitals in Srinagar, the region’s largest city, reported that at least 50 people had sought treatment for wounds from shotgun pellets and rubber bullets.

August 16 saw a major demonstration against the lockdown, when protesters gathered after Friday prayers in Srinagar, taking to the streets with signs reading “Stop genocide in Kashmir, Wake up World”. They were met with tear gas and shotgun fire.

The wholesale repression in Kashmir has been compared to that meted out by the Israeli state and its security forces against the Palestinian populations of the occupied West Bank and Gaza. But to find a precedent for the armed detention of a population on the scale of Jammu and Kashmir one has to go back to the period in which Nazi Germany was invading and occupying the rest of Europe.

One of the most noteworthy elements of the Kashmir events has been the near complete silence and indifference of Western governments and the media. The major news networks in the United States have ignored the mass repression almost entirely, while coverage in leading newspapers has been cursory and sporadic.

The US State Department issued a bland statement declaring, “We note that the Indian government has described these actions as strictly an internal matter.”

What would have been the reaction had similar repression taken place in Russia, China, Iran or Venezuela? Is there any doubt that it would have been given wall-to-wall coverage and occasioned heated denunciations and even threats of military intervention by Washington? Once again events have proven that “human rights” become an issue only when they serve to further neo-colonial wars for regime change or the offensive of US imperialism against its “strategic rivals”, Russia and China.

There are both economic and geo-strategic reasons for the US and other major capitalist governments in Europe and beyond to ignore the mass repression in Kashmir. Led by Washington, all of the major Western powers are seeking to build up India as a military-strategic counterweight to Chinese influence in Asia. Modi’s extreme right-wing government has collaborated fully in these efforts, throwing open India’s ports and bases to US warships and warplanes, joining a US-led quadrilateral strategic alliance with Japan and Australia, and otherwise turning India into a US frontline state in the confrontation with Beijing.

But there is a more fundamental reason for the silence of capitalist governments in the West’s over Modi’s crackdown. All of them can see themselves employing similar methods to quell mass social unrest in their own countries and, no doubt, have made extensive preparations to do so.

The government of Donald Trump in the US has employed increasingly authoritarian methods to consolidate a presidential dictatorship based on support from far right and fascistic elements, while utilizing police state measures to suppress refugees and immigrants. In France, Emmanuel Macron has “normalized” emergency powers and used them to impose sweeping social attacks, sent the army against “Yellow Vest” protesters and expressed his admiration for the pro-Nazi dictator Philippe Pétain. The government of Angela Merkel has cultivated and protected the far right in Germany, including fascist gangs and outright apologists for Hitler, while presiding over the emergence of the extreme right-wing AfD as the main opposition party in the Bundestag.

Everywhere, democratic forms of rule are crumbling under the impact of unprecedented and rising social inequality. Ruling capitalist oligarchies are turning once again to outright dictatorship and fascism in response to the intensification of the world economic crisis, the growth of trade war and geo-strategic conflicts and, above all, the resurgence of the class struggle on a world scale.

No worker should look at the brutal crackdown in Kashmir and think “it can’t happen here”. The cutoff of the internet, the flooding of the streets with troops, the imposition of round-the-clock curfews, the shooting down of protesters—and much worse—can and will take place in the United States, France, Germany, the UK and virtually any country, outside of an independent political intervention by the working class on an international scale based upon a socialist program for the overthrow of capitalism.