Speeches to March 19, 2015 public forum in London UK on ‘NATO and the crisis in Ukraine’

‘NATO and the crisis in Ukraine’ was the topic of a large public forum in London UK on March 19, 2015. The forum was organized by the Stop the War coalition and chaired by Chris Nineham. The four guest speakers were: 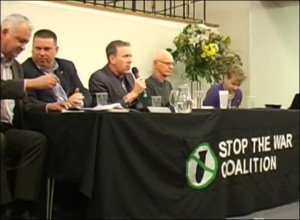 You can view and listen to the speakers and to the discussion period that followed by clicking on the weblink above or on the screen below.

Stop The War is organizing a one-day conference on June 6, 2015: ‘Confronting a World At War’. To reserve a ticket, go here.