A special appeal by Leonard Peltier 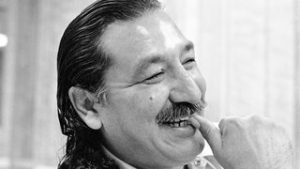 Over the past 41+ years, with over 20 years of good time (GT) credit, I have now over 60 prison years of time served. Under the Old Law system that applies to my case, this is by far longer than I was supposed to serve. Per the laws I’m under and that apply to my case, 7 years was a life sentence!! It did not mean that was all I was supposed to serve, but that I was eligible to be paroled and unless they had evidence to keep me in prison, I was to be granted parole.

In my case, I was to be paroled to the next 7 years, so in all I was to have only served 14 years. Next, there was the 30-year Mandatory Release (MR) law. All federal sentences were to be aggregated, meaning I would have to only serve 30 years. Many people have been released under the 30 MR law. Again, they could only refuse you a release if they “proved,” not just made claims, that you continued to violate the law. These same laws still apply to me today or are supposed to.

We have made a very positive gain in the last week, enough to open the doors to my cell and give not only to myself, but supporters and the support network what could very well be the keys, the avenue to my release that we all have hoped and looked for these 40+ years with over 20 years Good Time (GT). (Let’s never forget the GT as it counts for anyone’s release). I feel very good about this development. Just maybe I can go home to die with my people. But until I can leave, it is not over. We are at a stage when we must put it all into this campaign for my freedom. And this is what I’m personally asking for – your help, again.

I want to say thank you to Amy Goodman of “Democracy Now,” Norman Brown and one of my attorneys, Marty Garbus. Thanks to Amy for being a great journalist and for asking good hard questions about the many constitutional violations in my case. Without you, the violations probably would never have been mentioned. Thank you, Amy. You’re the greatest and I love the hell out of you!!

Norman, I heard you did a great interview and your testimony was not only very moving. but very convincing/believable. Thank you, Brother. Marty, I was told you also did an excellent job, so I thank you as well. No, I did not get to see or hear the TV show/interview, so I must rely on others to tell me how it all went.

Although we have social media at our disposal, we still need to get this new development I mentioned out to the people that read specific newspapers, so we need to purchase some newspaper ads and I need supporters to dig into your pockets and help. There are so many of you around the world, it doesn’t need to be a lot of people. Even 500 people would be enough, I believe? But we need numbers to donate, as we need to put this ad in as many newspapers that we can, at least the ones THAT COUNT.

If any of my benefactors want to donate again, thank you. I was sent $100.00 for the holidays, so I will send this to my niece to put it into the account for this project, as I would rather use it for this than anything else. I have asked Kari Ann to take on this project personally.

O.K. Thank all of you and let’s finish this and make it work. Love you all.

In the Spirit of Crazy Horse…