Soviet peasants and collectivization of agriculture, 1930-39

Essay by Professor Mark Tauger of West Virginia University, published in 2005, published here by New Cold War.org with introduction, April 17, 2017.  (To read the essay, click on the pdf link below.) 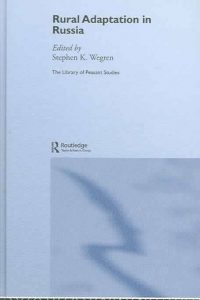 Professor Mark Tauger of West Virginia University published an essay in 2005 titled ‘Soviet Peasants and Collectivization, 1930-1939: Resistance and Adaptation‘. The essay is chapter three of a book titled ‘Rural Adaptation in Russia‘ which was edited by Stephen K. Wegren of Southern Methodist University. Dr. Wegren is a PhD in history from Columbia University.

In his essay, Tauger argued against what he called the “resistance interpretation” of the years of collectivization and industrialization of Soviet agriculture that began in the late 1920s and that ten year later had vastly expanded agricultural production until the disaster of the German invasion of 1941 struck.

By “resistance interpretation”, Tauger meant the interpretation of this chapter of Soviet history as being one of uniform and unbridled opposition and resistance by peasants and peasant farmers to collectivization and modernization of agricultural production, including in Ukraine.

In fact, Tauger argued, the attempts at a more collective and scientific approach to agricultural production were welcomed by large sections of the agricultural population in the Soviet Union. But he also explained in this essasy and in many other writings on the same subject how the socialist experimentations were tragically disrupted and hobbled by a host of factors. These included:

A measure of the difficulties in food production in the Soviet Union during the 1930s can be seen in the figures for annual grain harvests. The following figures are listed by Professor Tauger, based on calculations by himself and another Soviet researcher, R.W Davies.

Note:
[1] Famine or the threat of famine was a constant in Tsarist Russia and it recurred in the Soviet Union in 1918-21, when an estimated ten million people died, and in 1931-33, when an estimated 5.5 to 6.5 million died. The latter figures are cited by researchers R.W Davies and Stephen G. Wheatcroft in their 2004 book The Years of Hunger: Soviet Agriculture, 1931-1933. (Read more about that book here in New Cold War.org.)