Unable to reconquer Donbas, Kyiv wants it as an economic basket case to dampen secessionist feeling in the rest of South-East Ukraine

In a process that begun in July 2014 and was completed November later that year, the Ukrainian government in Kyiv severed all links to rebel-held Donbas in east Ukraine. This meant it stopped making social payments to citizens and de-funded all state institutions–courts, registries, hospitals, banks, post offices and state-owned enterprises. 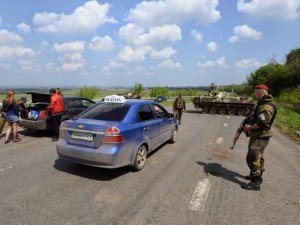 Strategically, this was a mistake. Nothing would have underscored the legitimacy of Kyiv’s rule in east Ukraine more but for it to continue to perform many of the functions of the state there. Likewise, the people in east Ukraine would notice it was Kyiv which continued to supply them with services the rebels were incapable, and Russia unwilling, to provide. As it was, the Kyiv government became a solely negative factor in their lives – what with its offensive military operations and the arming up of neo-Nazis.

Instead, it was the rebels which were forced to pick up the slack and which now – along with the prestige of being the people who keep the neo-Nazis at bay – enjoy also the legitimacy of being the people who provide the electricity, water, heating, pensions and medical care to Donbas people. In fact, initially the two rebel statelets – the DPR and LPR – were reluctant and slow to take responsibility for many of these tasks so they should really thank Kyiv for forcing them to take their state-building of rival, secessionist republics seriously.

Nonetheless, the argument laid above is a sophisticated one. As such, it is understandable that Kyiv did not appreciate it, but instead pulled out following the crude logic that dumping social responsibilities in the lap of the rebels would serve to decrease the amount of resources they could dedicate to building up their military capacities. 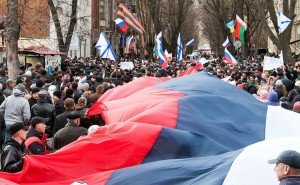 ‘Russian Spring’ in the city of Kharkiv, March 2014

It is much less understandable why Kyiv followed up its pullout from Donbas,s with a fully-fledged economic blockade. The two most clear-cut consequences of the blockade has been to enable Poroshenko to act the hardliner as well as to definitely win the hearts and minds of Donbas residents for the rebels.

Research conducted in March of this year showed the blockade helped an astounding 93 per cent of people in rebel-held east Ukraine to transfer their loyalties away from Kyiv.

This is scarcely surprising, since Poroshenko very much openly proclaimed the blockade was intended as continuation of war by means of collective reprisals against the civilians of Donbass:

Our children will go to schools and kindergartens… theirs will hole up in the basements. Because they are not able to do a thing.

This is exactly how we will win this war!

Exactly how Poroshenko thought this would win the war for Kyiv is a mystery. The idea that unarmed civilians would rise against armed rebels originating from their midst – and then for the benefit of their Maidan-affiliated tormentors was always bizarre. Likewise the idea that Donbas, which controlled a stretch of border with Russia, could actually be brought to its knees and forced to beg for mercy. 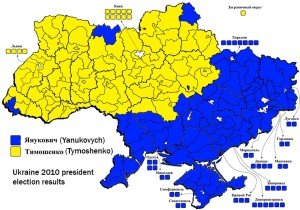 Result of 2010 presidential election in Ukraine. The victor was overthrown in the Maidan coup of February 2014

Dreadfully enough, during the winter of 2014-15 the blockade indeed contributed to a major humanitarian crisis. There was little food to buy and severe shortages of many types of medicine. There were even reports of individual deaths – usually of socially isolated pensioners, now without pensions. No doubt, things would have been even worse without humanitarian assistance from Russia.

This situation, however, has now been long superseded. Between commerce with Russia, smuggling across front lines, and transit from government-held Ukraine via Russia conditions in Donbas, as regards supplies, are now livable enough. – And there are no signs that Donbas is ready to fall on its knees before the government in Kyiv, as Poroshenko predicted in November.

If anything, we must assume that many eastern Ukrainians in rebel-held territories feel a measure of pride at having withstood Kyiv’s attempted strangulation of their region.

In other words, aside from being morally repugnant, the blockade has proven an utter failure in its stated goal of bringing Donbas back under central control and has instead made this goal more distant than ever.

It is more likely that the politicians in Kyiv regarded Donbas as lost from the onset and the blockade was instead enacted for their own political purposes. Which is merely to show they were still “doing something” to bring it back, even after they called off large-scale military operations in face of losses and defeats (and even as the blockade was having the exact opposite effect).

It is true, however, that the war and the blockade have made the material quality of life in rebel-held territories even worse than in areas under government control. This must come as a disappointment to many, since we can recall that hope for a better economic situation was perhaps the main mobilizing force behind the pro-Russian rallies in eastern Ukraine in the wake of Maidan.

By and large, the masses of people who came out for counter-Maidan rallies in February, March and April 2014 across eastern Ukraine were not signing up for adventure and armed uprising. That came much later as reaction to heavy-handedness and intransigence of Maidan-controlled Kyiv.

What they were calling for, instead, was for the relatively more orderly and economically prosperous Russia to swiftly take them under their wing, as it had just done with Crimea (thrilling its inhabitants).

Of course, the disappointment that Russia did not take over responsibility for Donbas is unlikely to translate into desire by its inhabitants to be taken over by the Maidan-affiliated forces that are shelling, blockading and demonizing them daily. What the blockade may do, however, is demonstrate to other anti-Maidan Ukrainians that no matter the depth of economic abyss that Ukraine is facing, an eventual separation from Maidan-controlled Kyiv would not bring material relief.

Educated by the example of blockaded Donbas (and the likewise blockaded Transnistria), Ukrainians in the southeast can now have no doubt that no matter how dreadful the material situation in Ukraine, an attempted secession would only result in things getting worse yet.

Mr Cisse is quite capable of looking across the border to Transnistria and seeing what a basket case it is, particularly economically.

As a businessman first and foremost (and a politician secondly), there is simply no gain for him in any form of separatist movement within his stronghold that would move his patch toward an economic disaster area whilst also eschewing it from Odessa, its infrastructure, and its wealth.

Neither would he take kindly to his small fiefdom becoming a second devastated Donbas for the sake of an illusionary Bessarabia.

Thus, no matter what sympathies Mr Cisse may have (or not) for the Kremlin inspired ‘Bessarabia project’ Mr Cisse and his very loyal ethic Bulgarian constituents are not about to sanction, encourage, give any meaningful support to, or lead the charge for, an independent/autonomous Bessarabia any time soon.

This, along with heavy policing – formal and informal – has to be a reason why we’ve seen very little evidence of secessionist feeling even in parts of South-East Ukraine where this sentiment was very visible last year before the war begun.

In other words, even if the Maidan regime is not able to inspire real enthusiasm and loyalty in the Southeast, it has conclusively demonstrated the ability to make lives fairly miserable in the material sense for those who try to break free–even in the event that they succeed.

It’s classic terrorist logic–Donbas is subject to collective reprisals, not in the hope it will surrender or be re-educated, but to be made into a lesson for those who might be tempted to follow in its footsteps.

Marko Marjanović is a writer and editor at Russia Insider.