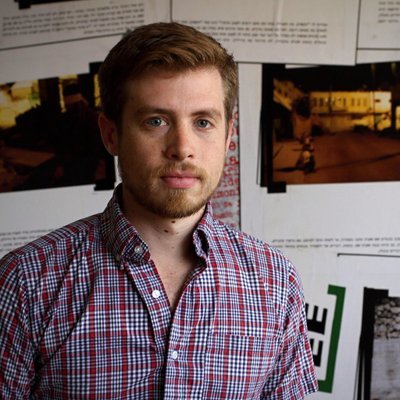 Avner Gvaryahu, the executive director of Breaking the Silence, from his twitter feed.

Opponents of the Gaza massacre are not confined to Israel’s enemies. Courageous Jewish voices within Israel, including soldiers, are also critical of what is happening. Netanyahu’s response is to try and ban the organisation that publishes their testimonies

Some Israeli soldiers who are posted to the Gaza border have reached out to Breaking the Silence, the dissident Israeli group that prime minister Benjamin Netanyahu has tried to ban because it publishes soldiers’ testimonies that are highly critical of the occupation.

Avner Gvaryahu, the head of Breaking the Silence, described the contacts during a panel at the J Street conference in Washington yesterday:

As long as there will be an occupation, soldiers will speak out. As long as we will continue to control Palestinians, there will be those people who say I have to take responsibility for what I did. And the numbers of soldiers who are coming are as high as they were ever, you know– even soldiers reaching out who are currently on the border with Gaza.

I later asked Gvaryahu if these soldiers are refusing to shoot, as B’Tselem, the human rights organization, has urged. “No, I said, some of them have reached out to us,” he responded.

What are they saying? “We don’t know yet. We have to sit down with them and verify the testimonies and so on,” he said.

Typically anonymous but extremely detailed, soldiers’ testimonies to Breaking the Silence have documented persecution, abuse, detention, and killings of Palestinians. Its report after the last large Gaza massacre of 2014 fostered international demands for war crimes prosecutions, and led to the official crackdown.

Israeli soldiers have shot and wounded more than 1000 Palestinian protesters, killing more than 31, over the last two-and-a-half weeks. Almost all have been reported to be unarmed.

Gvaryahu described 2-and-1/2 years of “heavy, heavy attack” on his group from the Israeli right wing. That includes almost a dozen bills in the parliament to try and ban the group from access to public spaces, or from speaking in schools, as well as efforts to block international funding, and personal threats of violence.

“When you look at what is happening in Israeli society you would expect after these two years of attacks, that soldiers would stop coming to Breaking the Silence. I was actually fearful of that,” he said. But that has not been the case, and he thanked many organizations for blunting these attacks, including the Meretz Party, Yesh Din, Peace Now, B’Tselem and “our mother and father,” the New Israel Fund.

Because the line of the Israeli government is that you cannot speak to them– even if the Jewish establishment here does not necessarily agree with them– “Why do you want to get mixed up in that?”