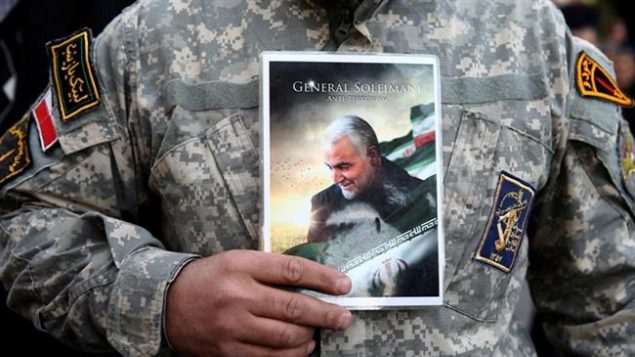 A demonstrator holds the picture of Lieutenant General Qassem Soleimani during a protest against the assassination in Baghdad of the Iranian commander by the United States, in Tehran, Iran, on January 3, 2020. (Photo by Reuters)

Just like Che Guevara, Quassem Soleimani spent many years of his life fighting US imperialism in many countries and ultimately died in a foreign land out of his certainty in the reality of international brotherhood.

A people without hate cannot triumph over a brutal enemy.” – Che Guevara

The assassination on Iraqi soil of Iran’s Qassem Soleimani will produce many things, and global resentment and hatred for Washington is undoubtedly already one of them.

Around the world the assessment is the same: Washington has committed an act of war. In their bloodlust to reverse Iran’s popular and democratic revolution – in order to keep feeding their bottomless neo-imperial greed –  Washington has electroshocked the world into remembering its brutal immorality: one remembers the pain of doctor’s needle with more clarity than the pain of a week-long illness, after all.

There will be so many ramifications to this cowardly, illegal, inhuman act – which so nakedly aims to be of profit solely to the US elite and not the average American – that we should take time to historically assess the true legacy of Soleimani: he is the Muslim Che Guevara.

He is not merely the “Iranian Che Guevara” because that makes no sense given Che’s ideals: Just like the Argentinian, Soleimani spent many years of his life fighting US imperialism in many countries and ultimately died in a foreign land out of his certainty in the reality of international brotherhood.

Limiting Soleimani’s legacy to the “Iranian Che Guevara” also makes no sense given the ideals of the Iranian revolution: Soleimani’s death reminds the world that Iran – seemingly alone in the anti-imperialist struggle in 2019 – repeatedly gives their time, money, blood, love and lives to non-Iranians out of a sense of progressive political internationalism.

Che Guevara died in October 1967 in Bolivia. The group Che died with was international, including Peruvians, Argentinians, Cubans, Bolivians and even two Europeans. Without Soleimani’s presence in Iraq and Syria both of those countries would be under total imperialist domination today, and probably Lebanon as well.

The Iranian revolution is just as international in scope and reach as the Cuban revolution Che was a part of creating and defending. Iran’s critics say they want to turn every Muslim into a Shia and make the laws of Iran the laws of the entire world…. but that is obviously the hubris of the imperialist West – Iran’s progressive goal is not control but liberation of the masses and then their empowerment.

Few Westerners seem to realize that the primary motivation of Che – perhaps the very picture of internationalism –  was undoubtedly Latin American nationalism: his dream was the same as Bolivar’s (and Cuba’s Marti and others in Chile, Nicaragua, etc.). For those who see the anti-imperialist struggle with historical accuracy, there is in an obvious parallel here with the “Muslim World nationalism” of Iran’s Soleimani.

Only the religion-phobes, the uselessly pedantic and the outright Iranophobes and Islamophobes will fail to see that.

It’s no matter to billions of people if such persons remain blind: Just like Soleimani, Che was disavowed by the leading leftists and revolutionaries of his day – the USSR detested Che and his bold resistance to Washington, which few recall. (Like Iran today, Che was appreciative of the Chinese view.) Moscow insisted – in their quite European fashion – that only they should lead and strategise the fight against Western imperialism. In short: now that the USSR had been liberated from foreign imperialism, nobody else needed to take up arms anymore. Of course, at the time of Che’s death the USSR was no longer led by the anti-fascist hero Che affectedly called “Daddy Stalin” – Khrushchev, Brezhnev and finally Gorbachev would grow decadent, corrupt, even renounce Soviet support for international anti-imperialist struggles, and finally wilfully implode the USSR from the very top and against the overwhelming democratic will of the Soviet people.

To the Western leftists – or anywhere else in the world – who can’t see clearly: Why did they kill Soleimani, too? Do they still think he was, to use a term popular in the US around 2003, an “Islamo-fascist”? Washington is certainly fascist, but they are not so very Islamophobic to kill Soleimani over being a Muslim. I hope this group keeps trying – one day they’ll finally understand.

Che was assassinated because his explicit goal was to create “multiple Vietnams”. Surely many streets will be named after Soleimani in Syria, and Iraq, and even Palestine (if Iran could get some help from Arab nations). Soleimani was undoubtedly a success.

But the invasion, sanctions, re-invasion and occupation of Iraq never motivated the West like Vietnam. Why? Islamophobia, perhaps. The injustice towards Iraqis did, however, motivate Iranians like Soleimani.

Was Che a success? He failed in Bolivia and the Congo, but Cuba remains the “first free country in the Americas”, and many would rightly say the only. Less appreciated is how Cuba fought alongside non-Latin Angola – who had the misfortune of being colonised by the most backwards Western imperialist (Portugal) – and how this directly led to the end of Apartheid in South Africa. Che was undoubtedly a success.

In the West Che is only a successful way to make money – his face sells all types of merchandise – but the notion that his ideas are remembered, understood or (LOL) taught is laughable. For the West Che merely symbolises romance, not revolution, politics or morality.

And that’s where this article moves on from placing Soleimani in his proper historical context.

If Iranians think that continuing their revolution is just romance and posing – instead of a necessary self-sacrifice, which is undertaken with no expectation of earthly reward (and in fact more likely to produce quite the contrary), in order to prevent brutality and hate ruining the lives of tens of millions of Iranians – then their revolution will fail. Revolutions often fail: ask the French. They still celebrate it every Bastille Day, but that is more romance and posing.

For those non-Iranians who think the Iranian revolution is not needed globally, and especially regionally, urgently – just go ask an Iraqi, Syrian or Palestinian if they agree. Other countries will be included one day, and I am first thinking of those areas which are so deeply vital to Islamic culture, such as Egypt, Morocco and Arabia. One day the sons and daughters of Che and Soleimani will unite in countries which are neither Muslim nor Latin, Inshallah.

For those who think Soleimani will be the last atrocious slaying it is necessary to recall that the death of Che was only the first – Sukarno, Nkrumah, Ben Bella, Martin Luther King and Robert Kennedy soon followed.

However, we should not forget they were preceded domestically by Malcolm X and John Kennedy – assassination is not at all a new policy for the US, and we should not imagine that suddenly is now. The goal of such assassinations is clear: to discourage future revolutionaries, and also to retard ongoing anti-imperialist movements.

However, I am not worried that the Iranian Revolution will fall with Soleimani, and I mean that with reverence for his sacrifice and achievements: the idea that a popular revolution can (or should) rest on the work of one man alone… this is not revolution, nor popular, but the “great man-ism” of Western capitalism-imperialism. This is Macron, Rhodesia, Louis XIV, Churchill, and, of course, Trump. A successful revolutionary culture produces a system which is able to produce moral and capable leaders over and over and over until the revolution is truly secure – Iranians have more than 40 years of successful revolution upon which to justifiably base their faith in the future, despite these sad days.

Trump has committed an act of war, but a quick, hasty revenge will almost certainly be detrimental to the many just causes Soleimani and others have sacrificed so much for. Soleimani did not become the Muslim Che Guevara and repeatedly triumph over a brutal enemy by placing the good of one person over the good of the nation and the good of the struggle.

Angola provides the best example of how Che’s death should have been dealt with: they launched an anti-imperialist offensive called “Che is not dead”, which proved to be the beginning of the end of Portuguese control over Guinea-Bissau and then of the entire Portuguese empire by 1974.

Thanks in large part to Soleimani’s efforts, after so many decades of Western-led corruption, hate and brutality Iraq appears strong enough that they may even be able to expel the US immediately and even peacefully. I don’t think Soleimani would ask for any greater legacy than that – this is what he died for.

Ramin Mazaheri is the chief correspondent in Paris for Press TV and has lived in France since 2009. He has been a daily newspaper reporter in the US, and has reported from Iran, Cuba, Egypt, Tunisia, South Korea and elsewhere. He is the author of the books ‘I’ll Ruin Everything You Are: Ending Western Propaganda on Red China’ and the upcoming ‘Socialism’s Ignored Success: Iranian Islamic Socialism.’