A wave of public protests against the regressive social policies of the Ukraine government is rising in Ukraine. The Christmas season has been punctuated by protest across the country. 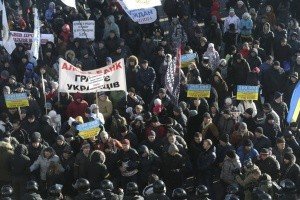 Protest in Kyiv against budget on Dec. 28, 2014, photo by UNIAN news service

Simultaneously, a fragile ceasefire in the east of the country is coming undone. The government in Kyiv is regrouping and rearming its military and extreme-right militias after a devastating blow delivered to them in late August by the pro-autonomy, rebel movement in southeast Ukraine.

Several thousand people rallied against austerity policies in front of the Verkhovna Rada (Parliament) in Kyiv on Dec. 23. Deputies inside were debating a proposed state budget that will radically slash social and economic spending in Ukraine. Other protests occurred in the days following, including by hundreds of people on Dec. 28 (English-language reports here and here). Cuts to government services will see hundreds of thousands of jobs lost. More job losses will result from plans for privatizations of state-owned enterprises. Taxes are to increase, the pension age is to rise to 65, and students will see costly tuition fees imposed for the first time in modern Ukraine. 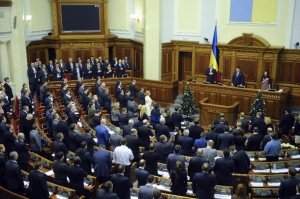 Prime Minister Arseniy Yatsenyuk wants to quadruple the price of natural gas to consumers. Last spring, the government decided on a price increase schedule of 40 per cent in 2015 and 20 per cent in each of the two years after that.

The government’s American finance minister, Natalia Jaresko, threatened that if the budget is not adopted by Dec. 31, promised funding to the government by the IMF will not be forthcoming. Her statement was a reminder of who, exactly, is controlling the purse strings in post-Maidan Ukraine.

The Rada approved the budget on Dec. 29 at 4:15 am. Deputies sang the national anthem following its adoption. The next in a running series of IMF ‘missions’ to Ukraine is now expected to land on January 8.

One of the 70 deputies who voted against the budget, Svitlana Zalishchuk of the ‘Poroshenko Bloc’, wrote in Novoye Vremya news site, “[The budget] was approved in between a war, a default and tickets to ski resorts. These reasons, to varying degrees, were decisive for deputies who voted with their eyes closed, and with both hands up. In every sense of the word.”

Another Poroshenko Bloc member who also voted no, Sergiy Leshchenko, said, “Blessing the rape (of the Rada so it would adopt the budget) with the national anthem is a very special sort of patriotism.”

According to Bloomberg News, the budget projects that military spending will consume 5.2 per cent of government expenditure in 2015. 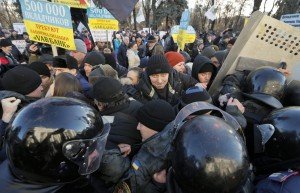 The protest on Dec. 23 drew civil servants, teachers, doctors and students. Iran’s Press TV service reported (including video), “Protesters demanded the government stop cutting social benefits, subsidies, and price controls on utility rates. The state budget is expected to be slashed by 10 percent and gas prices are to become three times more expensive. Most of the cuts are to be made in the social sector, with 10 percent of the country’s public workers expected to lose their jobs.”

“According to the prime minister, Ukraine has “received a total of USD 9 billion in financial aid from the IMF, World Bank, and other financial institutions” this year, but has spent USD 14 billion servicing its debts. He added that Kiev would need another USD 15 billion next year.”

RIA Novosti‘s correspondent reported that during the course of the day’s demonstration, other movements joined the protest, including representatives from Ukrainian trade unions and supporters of the Svoboda Party. (See another brief video report on the Dec. 23 protest, here.)

Tamara Zamyatina comments in the TASS news agency on Dec. 26 that the right-wing government installed in Kyiv earlier this year and confirmed since then by restrictive electoral exercises to the presidency and Rada is acting like its predecessor. It is disregarding the social demands of the population even though it was protests in late 2013/early 2014 that propelled the incumbent rulers to power.

Zamyatina cites Viktor Medvedchuk, the leader of the Ukrainian Choice public movement, who wrote recently, “It looks like our authorities have failed to learn anything from the Maidan.”

“The government and the people are again on the opposite sides of the barricades,” he said.

Vitaly Yahno, a coordinator of the Dec. 23 protest, told UNN, “First of all, they want to pass a budget with which the majority of people gathered here today are dissatisfied, and they want to extend the powers of the National Security and Defense Council of Ukraine.”

Sergey Markov, Director of the Moscow-based Institute for Social and Political Research, commented to Zamyatina on the ominous political trends that are running parallel to the social cuts. “The authorities won’t allow these protests to take on a mass scale,” he said. “The Verkhovna Rada has passed a bill considerably expanding the powers of the Council for National Security and Defense in resolving the crisis situations. This expansion allows it to isolate trade union leaders and organizers of protests from society, while the protests will be suppressed toughly.”

“Ukraine is turning into a police state,” he said.

Alexey Makarkin, a deputy director of the Center for Political Technologies in Moscow, outlined his view of the Maidan movement. “State power in Ukraine was supplanted by an active minority of the population–students and businessmen–who would like to enjoy visa-free travel to the EU and who are pleased to see foreigners in the government.”

“And if you take the majority of Ukrainians, it was not at all the European integration that was on their minds in February. They were concerned with the hryvnia’s exchange rate and the rise of prices for foodstuffs and utility services.”

“The opponents of the Kiev regime have turned into emigrants — they have shifted to Crimea or to the Donetsk and Luhansk People’s Republics and there’s scarcely anyone to take the lead in the protest movement,” Dr. Makarkin said. 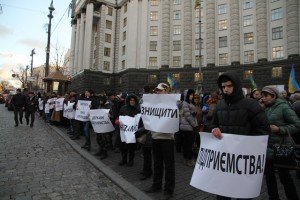 Workers at the state-owned spirit (beverage) alcohol producer ‘Ukraspirit’ are mobilizing to oppose privatization plans. On Dec. 23, they blocked major highway routes linking Kharkiv to Kiev, Chernovtsy to Ivano-Frankovsk, and others. The main slogan is ‘No to privatisation’. (News report and photo here.) The workers were joined in their protests by farmers and by unionized workers at distilleries.

In several southern regions of Ukraine, people are protesting rolling cuts to electricity service. Here is a report of a regional protest in the town of Domanevka. People are concerned about road and other public safety when electricity service is suddenly cut unannounced. As well, electricity authorities have been installing household meters that automatically cut service at two kw per day unless a customer has prepaid for a higher amount. 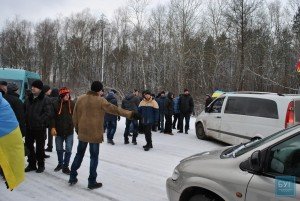 Striking miners at Novovolyns’kyi coal mine in Volyn region block a road on Dec 27, 2014

In the Volhynia region in western Ukraine, coal miners at the Novovolyns’kyi mine went on strike on Dec. 24, demanding that past-due wages be paid and that necessary investments be made to keep their mines producing. Three days later, they blocked a road in the region to press their demands.

The Special Monitoring Mission for Ukraine of the Organisation for Security and Economic Cooperation in Europe reports the following in its latest bulletin:

On 29 December, the SMM observed a protest of miners from Chervonohrad (80km north of Lviv), who claimed they had not been paid since November and demanded support from the Lviv regional administration. Approximately 60 men from seven Chervonohrad coal mines gathered in front of the regional administration building. The SMM observed representatives of the regional authorities inviting trade union delegates into the building. The SMM observed seven police officers present during the protest, which ended peacefully.

As the social protests rise, Kyiv is fanning the flames of war. Train and bus travel to Crimea has been cut. Air travel was already cut last spring. There has been no resumption of talks that occurred on Dec. 21 about extending the fragile ceasefire in eastern Ukraine that was signed on Sept. 5 in Minsk, Belarus.

Heavy artillery fire on the city of Donetsk was reported on Dec. 28 but the exact scale of the shelling is not detailed in English-language reports.