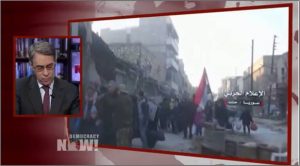 The broadcast begins with a short interview with a representative of the Western-financed ‘White Helmets’ agency, who alleges that “mass executions” are taking place in Aleppo at the hands of Syrian armed forces. Democracy Now! host Amy Goodman voices that claim in her introduction to the interview.

Robert Roth argues forcefully that “executions” of men, women and children are taking place in Aleppo today and that the Syrian and Russian air forces have “deliberately targetted civilians in Aleppo all along.

Stephen Cohen begins the interview by saying, “Does anyone here recall the term ‘the fog of war’?” He says the Western world is confronted by wildly divergent ‘narratives’ of events in Aleppo. “Either we are witnessing the liberation of Aleppo, or we are witnessing war crimes by Russia and Syria.”