Should Canadian foreign policy continue to be enmeshed with mining interests abroad? 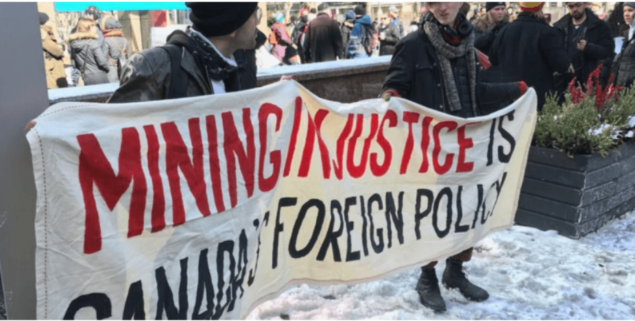 Two days after Canada lost its Security Council bid mining injustice activist Sakura Saunders tweeted, “the majority of the world’s mining companies are based in Canada without any laws preventing them from abusing human rights, Indigenous rights and environmental abuses, despite over a decade of fighting for such protections. Mining injustice is Canada’s foreign policy.” She is exaggerating, but not by much in many places.

“Should Canadian foreign policy continue to be enmeshed with mining interests abroad?”

That is one of 10 questions put forward in an open letter calling for a “fundamental reassessment of Canadian foreign policy” following Canada’s second consecutive defeat for a seat on the United Nations Security Council. The letter organized by the of Canadian Foreign Policy Institute has been signed by hundreds of politicians, artists, activists and academics including David Suzuki, Naomi Klein, Stephen Lewis and Linda McQuaig as well as sitting MPs Leah Gazan, Niki Ashton, Alexandre Boulerice and Paul Manly and former MPs Roméo Saganash, Libby Davies, Jim Manly and Svend Robinson.

Mining is remarkably important to Canadian foreign policy. While it may be of tertiary concern in relations with the US, China or Britain, the industry is of paramount importance to the Canadian diplomatic apparatus in dozens of countries. Even with a large, medium income, nation nearby.

Earlier this month leftist Mexican President Andres Manuel Lopez Obrador complained about Canadian mining firms failing to pay their taxes and then a week later raised the issue during a call with Prime Minister Justin Trudeau. Seventy per cent of foreign-owned mining companies operating in Mexico are Canadian based and the embassy has repeatedly backed controversial Canadian mining projects.

Last week 50+ Ecuadorian organizations collectively criticized Canadian ambassador Sylvie Bédard for promoting mining as an economic response to the COVID-19 pandemic. Their open letter explains, “we are concerned by the fact that the representatives of the Canadian government have found an opportunity in this global pandemic, a pandemic which has produced irreparable damage and tragedy in Ecuador, to promote your country’s economic interests.”

Among a series of interventions in support of a sector in which Canadian companies dominate, the open letter cites a recent interview in which Ambassador Bédard praised mining companies for their “very Canadian way of doing business…especially with respect to their relationships with communities, what we call, responsible business conduct.” But, there have been numerous high profile conflicts between Canadian firms and local communities over the years and Mining Watch has reported on a number of recent disputes with Ecuadorian farmers and Indigenous peoples.

In some African countries mining is even more central to Canadian policy. In an article titled “‘Les compagnies minières canadiennes sont parmi les plus transparentes au monde’, selon Carol McQueen, ambassadrice du Canada au Burkina”, Canada’s ambassador told news site Lefaso.net that Canada is the largest investor in Burkina Faso. Referring to some $3.9 billion in assets, McQueen noted, “we do everything to preserve this wealth and see how production can continue despite these challenges [an attack that killed dozens of mining employees].”

Canada’s ambassador to the former French colony added that Burkina Faso “is lucky that Canada and Canadian mining companies are so present because they are among the most respectable and transparent companies in the world.” But, Canadian firms in Burkina Faso have been accused of various abuses.

Canada’s aid/diplomatic apparatus doesn’t simply support specific firms. It shapes mining codes and nurtures extractivism in countries where there is little or no mining. As part of a multi-year Canadian backed push to develop an industrial mining sector, Nigeria established a Precious Metals Buying Centre last week. The Canadian High Commissioner aided the initiative seeking to “stimulate necessarydevelopments in and of the Gold & Precious Metals’ subsector of the Solid Minerals sector of the Nigerian economy.”

Two days after Canada lost its Security Council bid mining injustice activist Sakura Saunders tweeted, “the majority of the world’s mining companies are based in Canada without any laws preventing them from abusing human rights, Indigenous rights and environmental abuses, despite over a decade of fighting for such protections. Mining injustice is Canada’s foreign policy.” She is exaggerating, but not by much in many places.

For his part, Rick Salutin dismissed those who said Canada’s Security Council defeat was partly about “our mining companies that ravage African and Latin American countries.” While critical of mining firms, Salutin argues the Security Council defeat was all about Canada’s anti-Palestinian voting record at the UN. The Toronto Star columnist is right in saying Palestine was more important but wrong to downplay the extent to which mining has contributed to a negative perception of this country internationally. In recent years a half dozen UN bodies have called on Ottawa to hold Canadian mining companies accountable for their abuses abroad.

Since elites in most countries seek to cash in on mining its impact on the Security Council vote was less straightforward than Palestine (outside the US and Israel, no country saw an upside to Canada’s anti-Palestinian positions). As Bianca Mugyenyi put it in an Ottawa Citizen article titled “Why Black and brown countries may have rejected Canada’s security council bid”, “Canada is increasingly identified with mining companies internationally. While many among the African elite see benefits from foreign mining firms, they are also troubled by the community conflicts and ecological destruction often engendered by these companies as well as their tendency to skirt royalty and tax payments. Mining companies generally operate as though their only concern is making as much money as quickly as possible, yet Canadian diplomats all too often offer their assistance.”

The debate over mining’s impact on Canada’s international standing is significant. More important, however, is that Canadians debate weather this country’s foreign policy should “continue to be enmeshed with mining interests abroad?”