Seventy years of US destabilisation in China: US sponsored Uyghur insurgency in Xinjiang 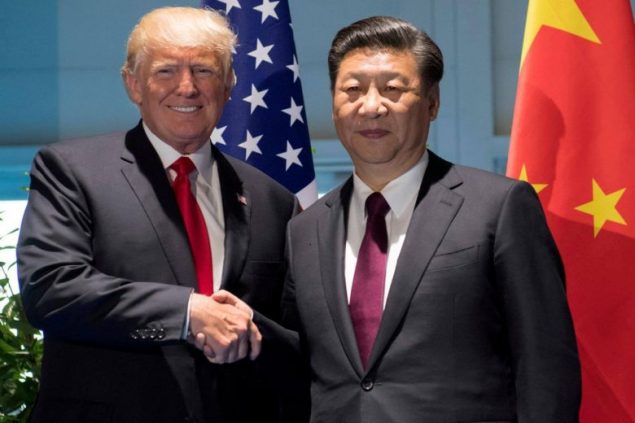 US President Donald Trump has spoken many times since coming to office of his friendship with Chinese counterpart Xi Jinping.PHOTO: REUTERS

China’s exit in October 1949, from the sphere of US control, was perhaps the heaviest blow to strike American post-World War II global hegemony. China’s successful drive for independence had been anticipated in Washington for many months.

In September 1948, the far-sighted American diplomat George Kennan noted that “there are considerable limitations on what we can do to affect the course of events in China”. Over the elapsing seven decades since, the scale of American influence in China’s domestic affairs has been restricted at best, but continues apace nonetheless. Washington has implemented a range of policies in the hope of destabilising and splintering China.

The Pentagon’s strategies towards China have somewhat mirrored those they directed against the USSR: Utilisation of proxy groups, extremists and ethnic minorities, along with client states.

In contradictory fashion, the Turkistan Islamic Party, which is based largely in north-western Pakistan, is deemed a terrorist organisation by the United States, along with other major countries like Russia, and of course China and its neighbour Pakistan.

By 2001, militant Uyghurs were preparing for guerrilla warfare in the same camps situated in Afghanistan where the CIA and ISI, Pakistan’s intelligence service, had once provided training to Mujahideen extremists – in order to hamper Soviet troops embedded in Afghanistan 40 years ago. Between 1990 and 2001, the Turkistan Islamic Party perpetrated over 200 terrorist acts, including blowing up vehicles, market places and assassinating Chinese government officials.

Following the September 11 attacks on America, Uyghur extremists were seen fighting against US soldiers during Washington’s “war on terror” in Afghanistan. Almost two dozen Uyghurs were sent to the notorious US-run Guantanamo detention camp in south-eastern Cuba, with some Uyghurs held there for as long as 12 years.

High profile Uyghur separatists, like the Xinjiang-born Anwar Yusuf Turani, founder of the East Turkestan Government in exile, is himself living in the state of Virginia, on America’s east coast. Turani has been a willing tool in Washington’s power game with China; in June 1999, he met with president Bill Clinton and asked him to back political movements seeking independence for Xinjiang; and Turani later enjoyed dialogue with Clinton’s successor, George W. Bush, who promised to support the “fundamental human rights” of “Uyghurs and others living in China”.

Further prominent Uyghur exiles living in America have called for Xinjiang’s independence from China, such as Rebiya Kadeer, a five-time Nobel Peace Prize nominee, born in Xinjiang, and who also resides in the US state of Virginia.

For 11 years until November 2017, she was the leader of the World Uyghur Congress (WUC), headquartered in Munich, and which is partly funded by the National Endowment For Democracy (NED). The NED, partially subsidised by the United States Congress, has a long history of “soft power” interference in sovereign states around the world: China, Nicaragua, the Ukraine, and so on.

The World Uyghur Congress was established in April 2004 by Erkin Alptekin, a former adviser to the CIA.

Kadeer’s husband has previously worked as a commentator for the US government-run broadcaster, Radio Free Asia. Like Turani, Kadeer is something of a pawn for Washington in the growing US-China geopolitical rivalry. In the past, she accepted invitations to meet president George W. Bush and Secretary of State Condoleezza Rice, so as to seek backing for Uyghur independence from China. During a June 2019 visit to US ally Japan, she called on Tokyo to provide more political support for Xinjiang.

One of the central reasons for Beijing’s strong focus on Xinjiang, is because this region is rich in both oil (21 billion tonnes) and coal deposits (40% of China’s entire reserves). Some Uyghur natives have complained that Beijing simply dispatches the raw materials from Xinjiang directly towards the Chinese capital, and to other relatively affluent cities like Shanghai, without providing adequate compensation in response. Even a small surtax could be enough to significantly improve the living conditions of Uyghurs.

The experienced Brazilian historian, Luiz Alberto Moniz Bandeira, wrote that Beijing’s vested concerns in Xinjiang are also partly due to its position as a pipeline hub; a territory through which natural resources pour into China from Central Asia, and which Bandeira states “was one of the factors behind the ethnic tensions that erupted over the course of the 1990s, and the beginning of the 21st century, with China investing $15 billion in the region’s infrastructure and development until 2001, including petrochemical plants and gas transports to Shanghai”.

The China National Petroleum Corporation (CNPC), a state-owned company based in Beijing, “sought to transform Xinjiang into the country’s largest oil and gas production base until 2020”. Unsurprisingly, Beijing’s exploitation of Xinjiang’s resources has been increasing, while the province is a focal point too for China’s vast Belt and Road Initiative (BRI) industrial project.

Furthermore, Xi Jinping’s government retains strong ambitions in linking Xinjiang to Gwadar, a strategic port situated in southern Pakistan and which rests on the Arabian Sea. For a number of years, Beijing have been investing heavily in Pakistan, also reaching south to Gwadar, which could provide China’s administration with a field of scope into some of the planet’s most vital oil shipping lanes; with the Gulf of Oman and Persian Gulf waters positioned tantalisingly close to Gwadar.

China is Pakistan’s largest trading partner, and Beijing views its neighbour as an important ally, borne out by the China-Pakistan Economic Corridor – an infrastructural program between these two nations valued at tens of billions of dollars.

Focusing on the Pentagon’s efforts again to destabilise China, we turn our attention to Tibet: A glorious region in south-western China whose landscapes are dominated by towering, snow-filled Himalayan mountain tops, vast uninhabited plains, while in size Tibet is almost twice as large as France.

Following China’s 1949 revolution, the American Congress deemed that Tibet had a right to “self-determination”; and Washington gave full support to the Tibetan Government in exile, which was established in 1960 by the current Dalai Lama (Tenzin Gyatso). The Dalai Lama – who has links to the CIA dating to the 1950s – fled to India from Tibet’s capital, Lhasa, following the failed and bloody 1959 Washington-backed Tibetan uprising against Chinese control.

This revolt was partially instigated within the United States itself, under the auspices of CIA officer Bruce Walker at Camp Hale, the US army training facility in Colorado. At Camp Hale from the years 1956 to 1957, the CIA extensively trained 250 to 300 “Tibetan freedom fighters”, all of which was kept secret from the public. The CIA’s training of Tibetans continued at Camp Hale until it was closed in 1964.

Another covert base for US operations against China was established in the Colorado ski resort town of Aspen, where Tibet’s proxy forces were flown over by American aircraft before being dropped by parachutes.

Other CIA training camps were established in separate locations in the south Asian country of Nepal, which borders Tibet to the north. Between 1949 and 1951, the number of CIA operatives engaged in covert actions increased ten times over. The CIA’s budget, for encouraging revolts and social unrest in China, reached 20 times the sum of money allocated for the 1953 overthrow of Mohammed Mossadegh in Iran. The CIA received assistance in targeting China from the special services of Nepal and India.

The Dalai Lama’s older brother, Gyalo Thondup, was involved in various CIA-sponsored operations against China, which were eventually crushed by Beijing, resulting in many thousands of deaths. Often playing the role of the Dalai Lama’s “unofficial envoy”, Thondup, living in India today and aged in his early 90s, first travelled to the US in 1951. He provided ample information to the US Department of State on all issues concerning Tibet.

A CIA-funded and armed Tibetan army, the Dokham Chushi Gangdruk, continued a guerrilla warfare campaign for years within the frontiers of China. By the mid-1960s, there were almost 2,000 US-supported combatants of Tibetan ethnicity in operation. The Dalai Lama benefited from generous quantities of CIA funds, and in 1964 alone he was subsidised with $180,000.

Until 1975, the Dalai Lama obscured the CIA’s role in the 1959 Tibetan revolt and other activities, at a time when he was in contact with US agents in Tibet. The Dalai Lama, who won the Nobel Peace Prize in 1989, was furnished with an allowance from the CIA dating to the early 1950s, but perhaps even preceding that.

During an interview with the New York Times in mid-September 1993, the Dalai Lama said, “today, the help and support we receive from the United States is truly out of sympathy and human compassion”. Well into the 21st century, US governments have continued chanelling funds to Tibetan independent causes, through US Department of State branches like the Bureau of Population, Refugees, and Migration (PRM).

Elsewhere in China, and in more recent times, Washington has been limited to utilising its “soft power” organisations like the Reagan-era founded NED, which is financially supporting the anti-Beijing protests in Hong Kong. Since 2014, the NED has provided about $30 million to Hong Kong’s pro-Western or independence marchers. The demonstrations have enjoyed large-scale coverage and sympathy from the mainstream press.

It may be apt to highlight the phrase used by the American scholars, Noam Chomsky and Edward Herman, in their book Manufacturing Consent – regarding the case of “Worthy and Unworthy victims”.