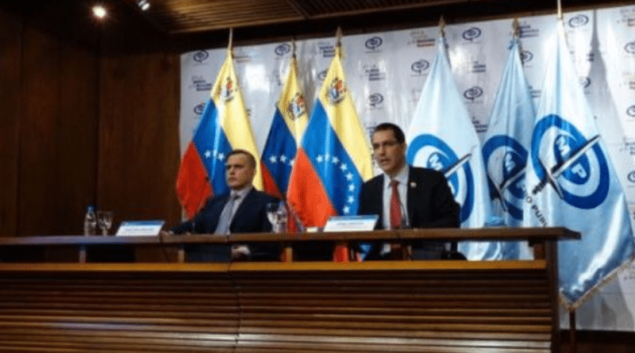 Venezuelan Foreign Affairs Minister, Jorge Arreaza and Attorney General, Tarek William Saab, revealed one by one some of the errors contained in the report of the Mission to Determine Facts in Venezuela, prepared by “experts” from the United Nations during a press conference held in the headquarters of the Public Ministry in Caracas this Saturday.

Venezuelan Foreign Affairs Minister, Jorge Arreaza and Attorney General, Tarek William Saab, revealed one by one some of the errors contained in the report of the Mission to Determine Facts in Venezuela, prepared by “experts” from the United Nations during a press conference held in the headquarters of the Public Ministry in Caracas this Saturday.

They do not even verify Venezuelan laws. They say that the Commission for Truth and Public Transparency created by the National Constituent Assembly (ANC) has already expired. However, the chairman of this commission is Attorney General Tarek William Saab, who continues to lead its functions. This commission will be in effect until December 31, 2020, when the ANC is scheduled to complete its term.

In the report they assert that the prosecutor Tarek William Saab is an active member of the United Socialist Party of Venezuela (Psuv). “It is public and well known that the prosecutor renounced all political activism before he was sworn in as ombudsman (prior to being appointed Attorney General),” said the chancellor.

Among the recommendations, the group of “experts” urges Venezuela to follow the opinion of the Inter-American Court of Human Rights of the Organization of American States (OAS) and to heed the previous report presented by the Secretary General, Luis Almagro.

This suggestion falls under its own weight, since Venezuela made the sovereign decision to leave the OAS on April 27, 2017, which became effective in 2019.

The United Nations, the body for which the writers of the mercenary report work, recognizes the administration of President Nicolás Maduro as the only government in Venezuela. However, this group of “experts” also recognize a fake, phantom government. “You have to be consistent,” urged the chancellor.

The work for the mission of “experts” is based largely on responsibilities of the former prosecutor of Venezuela, Luisa Ortega Díaz, today a fugitive from Venezuelan justice.

“Many of the elements that they allege were not investigated, but are already being investigated by the new attorney general, were the responsibility of Luisa Ortega Díaz who was here for 10 years constituting extortion mafias and who did not deal with human rights in Venezuela. The person responsible for many of these irregularities has her opinions validated by them,” said Chancellor Arreaza.

The report of the Mission to Determine the Facts in Venezuela speaks of the fact that the conditions of confinement of Leopoldo López in the Ramo Verde prison may constitute torture and cruel, inhuman or degrading treatment or punishment.

However, during the time that the founder of Voluntad Popular spent detained in said center, he celebrated birthdays with his children, he split piñatas for them, shared sushi afternoons with his family, built Christmas trees, there is photographic evidence of López playing guitar and lived alone in a 27 square meter room with a private bathroom. All this was supported by photographs presented during the press conference offered by the chancellor and the prosecutor.

Likewise, the report speaks of the “cruel” conditions of detention experienced by Juan Requesens. The chancellor and the prosecutor dismantled this fake news by presenting the statements of Requesens himself. “I have been treated medically, I receive visits from my relatives from 11 am to 3 pm, I have outings in the sun every morning, I do physical exercise in a gym area, I receive humane treatment, I have access to books and a room and a private bathroom. No one has hit me, and no one has been disrespectful to me,” were some of his words days after being released.