September update: the sound of war drums over Ukraine 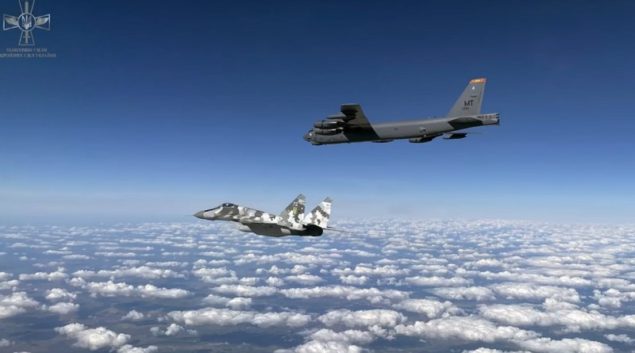 New Cold War’s regular contributor and analyst, Dmitriy Kovalevich, updates our readers on the disquieting events that are taking place in the skies above Ukraine during the month of September and the possible deadly consequences of such action.

During September, many Ukrainians have been feeling anxious due to the increasing signs of an impending military escalation of the global conflict between Russia and the United States. Some have voiced the opinion that Ukraine could become a battlefield between the two nuclear superpowers. Naturally, this prospect is not making Ukrainians happy.

In early September, US strategic B-52 bombers, capable of carrying a nuclear weapon, flew over Ukraine for the first time[1]. Flying from the US military base in the UK, they proceeded via the Volyn region (western Ukraine) towards the Crimea, although they did not cross its borders. Nevertheless, the Russians raised the alarm and sent fighters out to intercept the “flying fortresses”.

At the same time, Ukrainian fighters escorted the B-52s – essentially helping the US to practice their approaches when striking Russian targets, including Crimea. The Ukrainian Defense Ministry said,[2] “Ukrainian military experts write that NATO reconnaissance aircraft have successfully used this and received all the necessary information about the air defense of their potential enemy.”

This mission is can be described as scandalous. The B-52 is a strategic bomber. And its purpose is not reconnaissance, but missile and bomb strikes; moreover, these “flying fortresses” are designed specifically for nuclear weapons.

This action means that Ukraine has assisted in rehearsals for possible attacks using weapons of mass destruction on the Crimea – territory that it considers to be its own. Moreover, there is a strong likelihood that strikes against southern Russia proper were also practiced. And it is the first time that this has been done from Ukraine territory.

It is obvious that in the case of a real war, American bombers entering Ukraine’s air zone would become targets for the Russian military. In other words, a nuclear war may be held in Ukraine’s airspace. In this sense at least, the enthusiasm of the Ukrainian defense ministry would seem to be unjustified.

The Ukrainian journalist Yuri Tkachev writes[3], “The United States systematically uses the airspace of Ukraine for the passage of strategic nuclear bombers, practicing nuclear strikes against facilities in the Crimea and southern Russia.

Just recently, two B-52H Stratofortress flew via the country from Volyn to the Kherson region.

Presumably, these bombers will apparently fly along these routes in the event of a real nuclear war. That is, the airspace of Ukraine becomes the default target for Russian air defense.

And perhaps not only air defense. And not only airspace. Were the citizens of Ukraine ever asked if they would like to participate in a global thermonuclear war on the side of the United States? Of course, not. When did the colonial administration ask the opinion of the natives of a colony on such issues?”

This prospect is also aggravated by the situation in Belarus. The Ukrainian government has not [yet] recognized the official election results in the neighboring country, which is not only its main trading partner, but also a platform for negotiations over the conflict in Donbass that are taking place in Minsk. Now the Minsk negotiations may well stall and it will be difficult to find another neutral territory – representatives of the Donbass republics will not go to the EU countries, fearing possible arrest, and the Ukrainian delegation will not go to Russia.

On September 14, three US strategic bombers again entered Ukrainian airspace from the UK, rehearsing strikes against southern Russia and Crimea[4]. And again, on September 23, American strategic B-52 bombers passed over Ukraine on low level flight[5].

In addition, several NATO aircraft were located over the Crimea’s Black Sea coast region – three RC-135s, a P-8 Poseidon patrol and a British Sentinel R1. Also, in the Danube Delta area, an AWACS “flying saucer” E-3CF was scanning airspace, and a British Air Force Airbus KC2 Voyager was hovering over the Odessa region.

According to experts, these are the first time such flights have been conducted in the history of Ukraine’s relations with its NATO partners.

Warning of these prospects, Kiev-based political scientist Alexander Skubchenko writes: “The US Embassy boasts of how their military aircrafts fly over Kiev, the British Ministry of Defense writes about the landing of its paratroopers in Nikolaev, in the following way: “We dropped into Russia’s backyard” and the Office of the President of the ‘Russian backyard’ (i.e. Ukraine) is proud of “joint exercises”. If you didn’t know what the occupation looks like, it looks like this. Ukrainian patriots, if your “Western partners” will fight with Russia, then the fight will happen in its “backyard” using you – their cheap cannon fodder.”[6]

The smell of war is unmistakably in the air of Ukraine, and not only because NATO military planes fly there. Another reason for these alarming forecasts is the appointment of the next US ambassador to Ukraine, Keith Dayton, who previously worked as a military attaché in the Russian Federation and is considered by the Pentagon to be one of the key specialists in the “Russian” direction. His “CV” includes participation in the military aggression against Iraq, which has become a real a catastrophe that destabilized the countries of the Middle East region for a long time. In 2008 Dayton acted as a secret adviser to then Georgian President Mikhail Saakashvili and helped him develop a strategy how to “defeat Russia”. The result was – military provocation, numerous civilian casualties and the defeat of the Georgian army within five days. The US military advisers did not suffer for that provocation; that was for the people of Georgia and South Ossetia.

The Ukrainian journalist Alexei Romanov explains, “New US Ambassador to Ukraine Keith Dayton. A professional military. Forty years of service. Lieutenant General. He was in charge of operational US army intelligence service. And now just add numbers: flights over Ukraine by US strategic bombers, flights of reconnaissance aircraft, and frequent visits of US Navy to the region. Appointment of a high-ranking military commander as an ambassador. Do you know what happens in the end? It turns out that the United States is preparing for a war with Russia. Moreover, on the territory of Ukraine. This means that there will be scorched earth here. The cannon fodder is ready. Our brains are already washed with propaganda. Militaries – trained and experienced (in Donbass). The weapon is supplied. I don’t know what to do with this information. Everyone must decide for himself – to run away or stay here. And if you run, then where? “[7]

Ukraine’s military preparations are accompanied by militarist propaganda, something that did not end with last year’s change of power. A significant role played by this propaganda is the policy of whitewashing the Ukrainian Nazis of WW2. In September, the Ukrainian Court of Appeal officially adopted a decision that considers the SS division ‘Galychyna’ as “non-Nazis”[8]. Let’s just say that again, to ensure its full impact is clear: according to the court, the SS were not Nazis. This gives way to the official glorification of not only Nazi collaborators but also the formation of the SS. This is a twist of the law on ‘decommunization.’ According to it red flags are forbidden but the SS are now considered ‘non-Nazis’. Before the court decision the judges and lawyers of the Ukrainian court received messages containing threats.

On the eve of the trial, lawyer Lyudmila Braslavskaya received threats, and at night at the entrance and at the door of the plaintiff Natalya Myasnikova about 20 leaflets were left showing a picture of her together with SS runes and the slogan “Glory to the nation, death to enemies”

The director of the Ukrainian Jewish Committee Eduard Dolinsky announced this on Facebook[9].

He provided a screenshot of the message that the lawyer received. It, in particular, contains threats of physical violence against judges and employees of the District Administrative Court of Kiev.

“All employees and judges of the Kiev District Administrative Court are declared accomplices of the Putin-Kremlin separatists and their lackeys of the power. If you refuse to satisfy the appeal, it will not go unpunished for you!” – says the message.

Ukranews reported, “Otherwise, the torches of avenge will be lit. When we come to everyone, all of Ukraine will see your bloody tears of repentance … We will show you what the Nazis really are!”[10]

It was following these threats that the court conceded to pressure and satisfied their demands, recognizing the SS as ‘non-Nazis’.

Thus, a combination of military preparations, Nazi whitewashing and US/UK military activity in Ukraine have become seriously ominous signs. Ukrainian experts predict the escalation of tensions up to direct military conflict right after US presidential elections. Most likely, any outcome of US elections will lead to an escalation of the internal US conflict which can be traditionally solved via its ‘outsourcing’ – entering a conflict on another country’s soil to mobilize and unite the American nation.