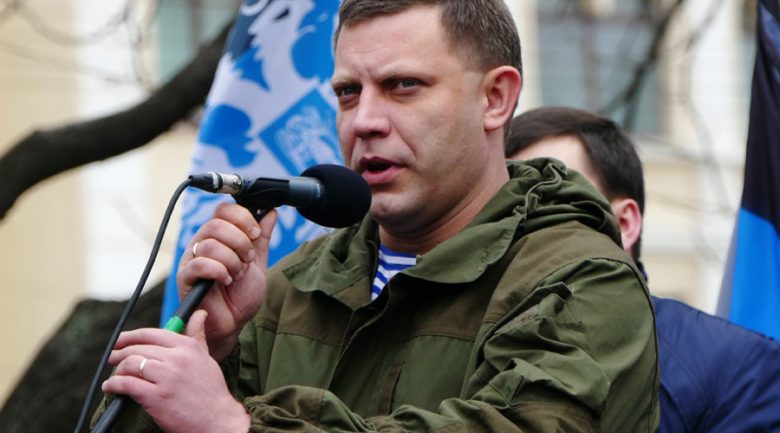 The final of three original posts, this is an in-depth analysis of the current unstable situation and political power vacuum in Donetsk following the assassination of Alexander Zakharchenko.

Early September in Ukraine was primarily marked by the shocking news of the assassination of the leader of the Donetsk People’s Republic, Alexander Zakharchenko. He was killed on August 31 in a Donetsk café, in a blast that also killed his body guard and injured 11 other people, who were in the café. The explosives were inserted into a light fitting suspended from the ceiling.

The murdered Donetsk leader was an extremely remarkable person and very popular in the region – one of those who can be called a true people’s leader. In 2014 he headed the Donetsk regional branch of the pro-Soviet antifascist organization “Oplot”, the centre of which is in Kharkiv. Even though the Kharkiv branch of Oplot was defeated by the Kiev security forces, its regional branch in Donetsk, headed by A. Zakharchenko, managed to defend the city and also attracting the defeated anti-Maidan activists from Kharkov and Odessa.

This is why Zakharchenko’s funeral was attended by crowds totalling some 200,000 people. The mass attendance and sorrow of the Donetsk people resulted in numerous outrageous comments from Ukrainian far-right politicians, claiming that after the “Donetsk liberation by our army” there would be a need for “cleansings” against all those people who mourned over Zakharchenko. There was in truth hardly any other modern state leader, who enjoyed so much powerful popularity and who personally participated in battles, while being a head of state.

The son of Donetsk miners and an ethnic Ukrainian, he often expressed a kind of nostalgia for the Soviet Union. His political views can be summarized in his own words:  “We considered, we consider and we will consider ourselves to be a part of the Soviet Union”.

Even so, the killing became just one more in a series of assassinations: most leaders of the Donbass resistance were murdered similar way. Looking back, I can recall that many military leaders of Donbass militias were not defeated on the battle field but murdered on the sly: A. Bednov (aka Batman) – assassinated in 2015; Alexei Mosgovoi (the most pro-socialist militia leader and organizer of international antifascist events in Donbass) – assassinated in 2015; P. Dremov – killed in 2015; A. Pavlov (aka Motorola) – killed in 2016; M. Tolstykh (aka Givi) – assassinated in 2017. These Donbass militia leaders were very popular locally – all were promoted from the rank and file to the status of leader by the ordinary masses. With their military tactics, each appeared to be very effective and managed to defend their cities from the Ukraine’s advancing regular army. All were assassinated: not one case has yet been solved and no murderers have been found.

Regarding the assassination of A. Zakharchenko, two main versions emerged immediately:

Furthermore, his attempts to curb speculation in the city were remarkable: he personally visited the city markets, laying his own pistol on a set of scales with the words: “I know precisely how much it weighs”. Many entrepreneurs were indignant because of the permanent money collections by the Donetsk rebels’ leaders, who motivated their taxation primarily by the need ‘to fulfil social obligations before ordinary people’. Unquestionably, these moves and initiatives could result in nothing but hatred among the local businessmen, whose aim was to profit from war and the people’s suffering.

Regardless of who the killer was, the assassination has left the leading position in the power structure of Donetsk vacant. Recently, The DPR People’s Council has appointed as its Chairman, Denis Pushilin, the Acting DPR head. Parliamentary elections, along with elections for the head of the republic, have been scheduled for November 11. A similar decision was adopted on the same day by the deputies of the neighbouring Lugansk People’s Republic.It should be noted however that earlier – since 2014 – Russia regularly asked for the postponement of the elections in the republics. Kiev media used to claim that this was a result of talks between Putin and A. Merkel. But the assassination has changed the situation.

Although I cannot predict the outcome of the elections, it is most likely that either he will become the next elected leader of the DPR, or Alexander Khodakovsky, the former security minister of the DPR, leader of the organization “Patriotic Forces of Donbass” who in 2015 declared his opposition to the former DPR authorities. Another popular political figure inside DPR is Pavel Gubarev, the former ‘people’s governor’ of Donetsk, who promotes the idea of “united Novorossiya”, that is, of the entire south-eastern Ukraine.

Political, civil and environmental turmoil in lead up to election

Meanwhile, the situation on the frontline in Donbass remains unchanged: sporadic fire, regular shelling of low intensity that daily takes the lives of two or three people. It is unlikely that the situation will change significantly until the conclusion of the presidential elections in Ukraine, which are scheduled for March 2019. Nevertheless, there is nobody from the Donetsk side to negotiate in the future, while the current Kiev authorities are unelectable and irresponsible. Next year it will be some other individuals who will have to negotiate, determine and solve the situation in the war-torn region.

Aware that they are unelectable, the current Kiev rulers are adopting new unpopular measures to secure their future exile in western countries – the same way as the former president of Georgia and leader of the color revolutions, Mikhael Saakashvili, who is wanted by Georgian authorities and recognized as guilty by the Georgian courts.

Among the unpopular measures recently adopted Kiev, I should mention the new negotiations with the IMF (its mission is visiting Kiev) and Ukraine’s government approval to meet the IMF demand and once more raise gas prices. During the same period, Kiev approved another critical law to get new loans from the EU – on liftingthe ban on exporting timber from Ukraine. The point here, is that since 2014 Ukraine has been suffering massive deforestation – illegal logging in some regions and the illegal exportation of timber to the EU have destroyed as much as 20% of Ukraine’s forests.

As ecologists are warning, this logging is threateningan ecological disaster and quite literally the desertification of Ukraine. But even so, the EU has regularly pressurised Kiev, demanding that the practice is legalized and promising new loans. And, despite mass opposition even from nationalist parties, Kiev has accepted this deal, allowing EU companies to fleece the country of its natural resources. Kiev is far from being in a good bargaining position, as its economy only survives due to the new financial loans coming from the IMF, EU and US, which are to be repaid as high interest loans – but in a way that could well cause a headache of the next Ukraine government.

Another bill, aimed to please the western ‘masters’ of Ukraine, was submittedby President Poroshenko in early September. This bill covers the introduction of amendments to the Constitution concerning the strategic course of the state for obtaining full membership of Ukraine in the EU and NATO. Accordingto the Ukraine’s ambassador in Germany, this decision of Poroshenko was immediately welcomed by A. Merkel and NATO officials. And this is happening despite the fact that Ukraine has unresolved territorial disputes and active civil conflict.

Western allies are even turning a blind eye to what are undeniably Nazi speeches coming from the Kiev leaders. In western mainstream media you will hardly ever encounter the news that the Maidan leader and Ukraine’s parliamentary speaker, A. Parubiy, recently calledAdolf Hitler “the greatest democrat,” pledging his allegiance Hitler’s kind of ‘direct democracy.’ But even these scandalous neo-Nazi politicians are accepted by western authorities, as long as they are anti-Russian and are trying to drag Ukraine into NATO.

These initiatives cannot be anything other than a signal relating to the planned escalation of the military conflict in Donbass, one aimed at provoking Russia to intervene and which will eventually escalate into the new Cold War with the looming prospect of a hot war, as a way out the global economic crisis.