‘The only sensible path at this point is dialogue’: CounterSpin interview with Hyun Lee on North Korea

Interview with Hyun Lee of Zoom in Korea, by Janine Jackson, broadcast on CounterSpin, April 7, 2017  (with print transcript)

Hyun Lee is an editorial advisor to Zoom In Korea, a project of the Solidarity Committee for Democracy and Peace in Korea. She is a New York City-based writer and activist and also a Fellow at the Korea Policy Institute.

‘CounterSpin‘ is the weekly radio broadcast of Fairness and Accuracy in Reporting (Fair), hosted by Janine Jackson.

Janine Jackson: The Washington Post suggests that people in Seattle and San Francisco “should be worried” about being hit by a ballistic missile from North Korea, citing an analyst who described such an event, a bit cryptically, as “a looming threat but not a current threat.” 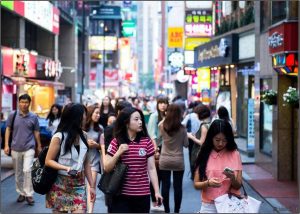 If the concern is that the saber-rattling between Kim Jong-Un and Donald Trump could indeed have dire consequences, it’s hard to see how such stories help, or maps that show ranges for North Korea’s missiles far greater than any actually tested missiles have gone, or the conflation of nuclear and non-nuclear weaponry. But we’re equally ill-served by a failure to interrogate US policy on the Korean peninsula, and corporate media’s reduction of North Korea to caricature in the time-honored method reserved for official enemies.

As we record this show Trump is meeting with China’s President Xi Jinping, and we’re told North Korea is at the top of the agenda, Trump having declared, “If China is not going to solve North Korea, we will.” What does that mean, and how has it come to this? We’re joined now by writer and activist Hyun Lee of Zoom in Korea, a project of the Solidarity Committee for Democracy and Peace in Korea. She’s also a Fellow at the Korea Policy Institute. Welcome to CounterSpin, Hyun Lee.

Hyun Lee: Hi. Thanks for having me.

JJ: Well, the Chinese foreign minister just described the US and North Korea as like two accelerating trains coming toward each other with neither side willing to give way, and I think people may well wonder how we got to such a disturbing point. Let’s start with the US. What, historically, have been the US’s intentions or goals with regard to North Korea, and have those changed?

HL: So, many people in the United States don’t realize that the US has maintained the threat of a nuclear attack against North Korea for decades. From 1958 to 1991, the US had hundreds of nuclear weapons in the southern half of the Korean peninsula, in South Korea. So at that time, North Korea’s countermeasure to deter a US nuclear attack was to forward deploy all of its conventional forces near the DMZ. 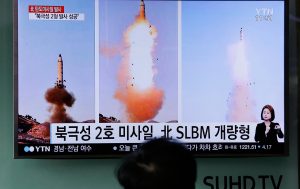 In 2001, when George W. Bush came to power, many things changed. There were technological advancements, and he also made doctrinal changes, centered around very high-tech, precision-capable weapons that gave the US preemptive strike advantage. He named North Korea part of the “Axis of Evil.” He also listed North Korea as one of seven countries that were potential targets for a US preemptive strike in the US Nuclear Posture Review. So then, in response to that, North Korea had to develop a new kind of deterrent, and that’s when it seriously turned to developing nuclear weapons, and its first nuclear test was in 2006.

Since that time, what the United States has tried to do is stall North Korea’s nuclear development, tying it up through negotiations that basically went nowhere, at the same time constantly threatening to bring about North Korea’s collapse, through sanctions that were crippling its economy, and also military exercises that were very provocative. They simulate war plans that now include the decapitation of the North Korean leadership, and include nuclear first strike.

US/North Korean relations during the Obama administration was a contest between Obama’s policy of “strategic patience,” which is basically waiting and preparing for the eventual collapse of the North Korean regime, and then North Korea’s policy called byungjin, which was making parallel progress in economic development, and also developing its nuclear deterrence capability.

Towards the end of Obama’s presidency, the consensus in Washington was that strategic patience had basically failed. North Korea obviously has not collapsed. On the contrary, many people who have been there recently come back and report that they’ve made progress in their economic development, and now experts are warning that North Korea will soon have, if it doesn’t already have, the capability of launching an ICBM with a miniaturized nuclear warhead that can strike the continental United States. Kim Jong-Un’s New Year’s speech earlier this year contained a message that basically they were ready to test-launch an ICBM.

And we’ve become very confused in the United States, because the mainstream media like to exaggerate the North Korean nuclear threat, but we never get news of what the US has been doing over the past decades. And we should be very clear that what this is all about is actually US nuclear first-strike advantage against North Korea, and North Korea reacting to that by developing its deterrence capability.

JJ: Well, yes, reporting is this world where there’s just an unspoken acceptance of the legitimacy of the United States doing things that official enemies are not allowed to do. The very idea of strategic patience—we’re just going to wait until the regime collapses—we can understand why North Koreans might not want to co-sign that as a plan. But it also depends so much about where you start the clock. In the US media, as you’ve said, it’s always North Korea taking the provocative action and the United States responding, and that’s getting it backwards, you think.

HL: You know, there is a double standard in US condemnation of North Korean missile tests, because the US also continuously tests ballistic missiles. In 2015 alone, the US flight-tested the Minuteman 3 ICBM from California, from the Vandenberg Air Force Base, five times in 2015 alone. So, I mean, every country has a sovereign right to test its weapons capability. That’s how you know if it works or not, and that’s precisely what North Korea is doing. So we should also note that there is a double standard there.

JJ: What concerns do you have specifically about what looks like being the Trump administration’s approach? We’ve seen both Trump and Nikki Haley say China has to deal with North Korea, and that’s supposedly the point, or one of the points, of this meeting with Xi Jinping. What do you make of that?

HL: Many experts have noted that it is not a good idea for the United States to outsource its North Korea policy to China. First of all, we should be very clear that the two countries have very different strategic interests in the region. So it is not a good idea, from the US point of view, to rely on China so much to carry out its policy, because it doesn’t make sense.

China has made very clear to the United States that if it wants cooperation in North Korea, it should first reverse its very controversial decision on the deployment of the THAAD anti-missile system in South Korea, that is right now in the process of being deployed, and it is a very controversial issue. It probably will be on the agenda of the summit this weekend. China considers the THAAD system, if it’s based in South Korea, a threat to its security, because the radar that comes with the system can be used for surveillance activity on Chinese missiles.

And so far, the Trump administration has been very aggressive in pushing THAAD deployment forward. Meanwhile, people in South Korea have been opposed to it, and are protesting every day outside the deployment site. If the US continues to push that forward it may make it very difficult to get Chinese cooperation on North Korea.

Secondly, China does not want the collapse of the North Korean regime, because that would create a huge refugee crisis at its border, and that’s the last thing that China wants. China also does not want the prospect of a unified Korean peninsula that is led by a pro-US South Korean government right next door as its neighbor.

So for all of these reasons, it’s probably not a good idea for the US to rely on China to carry out its policy, based on its strategic interest. It is more in US interest to negotiate directly with North Korea for North Korea to basically cap its nuclear and missile tests.

JJ: That moves me to the final question, because I’d like to talk about other ways forward. We know media get into saber-rattling mode, and it gets very difficult to hear other voices—and people who seek peace, or an end to conflict, are almost in a parallel conversation. But what possible ways forward do you see for those who seek an end to the conflict?

HL: The only sensible path at this point is dialogue: sitting down with North Korea and coming up with a fundamental solution to the crisis. We should note that last year in July, North Korea basically put out a statement that was not picked up or noticed by the Western media. But it laid out the terms for denuclearization, and all of the conditions that it laid out had to do with removing the threat to its sovereignty that’s posed by US nuclear weapons. That gives an indication that that’s what the North Koreans are fundamentally interested in resolving.

So a fundamental solution in my mind would be, first of all, ending the annual provocative war exercises that the United States military does every year in South Korea, abandoning the US nuclear first-strike prerogative, and then signing a peace treaty that will bring closure to the unended Korean War, eventually leading to the withdrawal of US troops from the Korean peninsula.

And then, in exchange, North Korea should halt its nuclear weapons development—meaning no more tests, no more nuclear tests or no more missile tests, basically capping it—and a commitment to nonproliferation. In my mind, that is the only sensible path to resolve the current situation.

JJ: We’ve been speaking with Hyun Lee of Zoom in Korea, online at ZoomInKorea.org. Thank you very much for joining us this week on CounterSpin.

Guests Hyun Lee and Julian Cho discuss North Korea’s recent missile tests and the history of military tensions between North Korea and the U.S.. They talk about the latest U.S. military provocation in the region, including the deployment of the Terminal High Altitude Area Defense (THAAD) missile system in South Korea.

*  Beginning on April 4, the U.S.-based ‘Task Force to Stop THAAD in Korea and Militarism in Asia and the Pacific’ will launch its national speaking tour on the South Korean people’s fight against the deployment in South Korea of the U.S. Terminal High Altitude Area Defense (THAAD) missile system. Remaining dates include New York City on April 13 and Washington DC on April 15. Details.