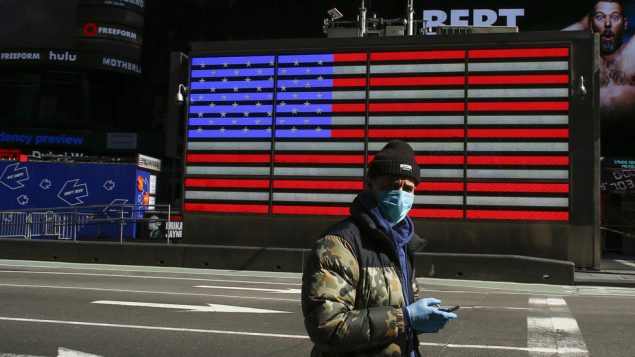 Self-delusions in leading circles in the US have previously led it to geopolitical disasters – in Vietnam, Iraq, in believing Russia would accept the US’ aggressive expansion of NATO. Now these self-delusions have led to a disaster on American soil itself.

The US, ‘the greatest country in the world,’ just can’t admit that China succeeded in dealing with the Covid-19 threat while America has failed. Instead of learning from China, it’s suffering the world’s worst epidemic disaster.

The international course of the coronavirus pandemic is established beyond challenge. China is the world’s first country with a major outbreak to bring it under control – reducing the number of daily deaths to zero on April 6. The US is suffering a worsening catastrophe.

US facts are clear. According to Johns Hopkins University,  it has over 368,000 cases and more than 10,000 deaths. The total numbers in the US are already approximately three times as high as China in absolute terms. But, as the US has less than one-quarter of China’s population, the US per capita number of cases and deaths is 12 times higher than China and rising rapidly.

The difference between the success of China’s response and the US failure is based on a fundamental difference in approach. China based its action on its ancient dictum ‘seek truth from facts.’ Many in the US engaged in national delusions. The lessons of the difference include but go far beyond coronavirus.

The danger of national self-delusion

Few things are more dangerous for any country than to lie to itself. The greatest disasters in human history frequently result from attempts to cheat reality. For example, Hitler in 1941 rationalized his decision to attack the USSR with the analysis “You only have to kick in the door and the whole rotten structure will come crashing down” – a disastrous denial of reality which unleashed the greatest war in human history, the total destruction of his regime (the one good result), and 27 million dead in the Soviet Union. Japan similarly made a catastrophic miscalculation in unleashing war in China and the Pacific.

Covid-19 does not reach the level of these cataclysmic misanalyzes but is undoubtedly the greatest global crisis since World War II. It illustrates the same life-and-death lesson – that reality is much more powerful than human delusions; and if you try to cheat it in serious matters, catastrophe will result.

Coronavirus will not be arrested for one microsecond by falsification or bluff. It is only defeated by strictly objective measures preventing humans transmitting it. China stopped the coronavirus by acting objectively when faced with literally a deadly threat – imposing a provenly successful lockdown, the fundamental approach to which, if not its comprehensive application, is now being followed in every country.

Regrettably, illustrating the same point from the reverse viewpoint, the US is equally now experiencing a worsening national catastrophe because some of its leading figures engaged in falsification and national delusion – helping create what will be only the third mass death experience on US soil in its entire history after the 1918-19 Spanish flu pandemic and the Civil War.

This difference between China’s fact-based strategy, and the attempt of figures in the US to defy reality, is therefore now necessarily creating an international ideological clash between China’s objective approach and the delusions in the US.

Fortunately for the American people, an increasing number of states, cities and other US institutions are refusing to be led into a literal death trap by propaganda. But tens of thousands of US lives, possibly many more, depend on how far propaganda and falsifications can be overcome.

China’s concept of a ‘common destiny for humanity’

A suitable starting point for understanding the international ideological difference in approach between China and the US is an ‘Open Letter to the People of the United States’ signed by 100 Chinese professors, think tank directors, and other leading academic figures which was published on the US website The Diplomat. This noted:

“The Covid-19 pandemic is a global public health crisis with a horrific scale not seen in generations; the effort to overcome both it and its impact will be nothing short of a long-term and arduous global war. Countries should be working together.”

“The Covid-19 outbreak in China is now basically under control… the Chinese people have made unimaginable efforts and sacrifices to achieve hard-won results.”

The signatories of the letter thanked the international community for its support during the most critical stage of the fight against the virus, and offered to share their experiences with other countries and provide all available assistance to them.

“We sincerely hope to cooperate with the international community, including intellectuals and experts from the US that look forward to a brighter future… We call on all nations to work together in sincere cooperation to defeat this common enemy of humanity,” the letter reads.

This approach is an application of China’s central foreign policy concept of a ‘common destiny for humanity’ – emphasizing that each nation is unique but one part of a common global future. China has therefore given both practical assistance and advice to other countries – including the US despite aggressive actions taken by Washington against China over issues such as the trade war.

Some of this assistance to the US has received wide publicity. For example, the Massachusetts governor transported a million medical masks from China using a plane owned by the famous US National Football League team, the New England Patriots.

Coordination involving China’s cities has also been achieved by the C40, the grouping of mayors of most of the world’s largest metropolises, with a combined population of 650 million. On April 3, it noted: “Today, experts from Beijing, Guangzhou and Nanjing shared vital knowledge and advice on the #COVID19 crisis with more than 50 cities from around the world.”

China, as the world’s greatest manufacturing base, obviously plays a decisive practical role in the fight against the virus. Due to the rapid decline in coronavirus cases in China, based on domestic conditions, it could now radically cut production of masks, ventilators and other equipment which was enormously increased during the peak coronavirus outbreak in China. But it has deliberately decided not to do so because it understands it can be the world’s greatest supply center in fighting coronavirus.

Some US politicians have openly and objectively thanked China for its help.

US spread propaganda instead of facing reality

In contrast to China’s reaction, there has been an exactly opposite and catastrophic response from leading circles in the US.

The most grotesque example was US Commerce Secretary Wilbur Ross, who viewed the coronavirus in the framework of whether it would deliver a supposed benefit to the US – saying coronavirus was an opportunity and will ‘bring back jobs.’ Instead, millions of Americans have already lost their employment.

President Trump’s administration also, regrettably, entirely underestimated the seriousness of coronavirus and correspondingly failed to prepare the US.

President Trump argued on 22 January: “We have it [the coronavirus] totally under control. It’s one person coming in from China. It’s going to be just fine.” Trends showed this was entirely false.

·    On 3 April, when the US Centers for Disease Prevention and Control advised Americans to wear face masks, Trump immediately undermined this by announcing at a press conference he was not going to.

·    On 5 April, President Trump said that ‘the toughest week’ for the coronavirus in the US would be that week or the next week – in fact the situation was still deteriorating rapidly, with no US coronavirus death peak in sight, so within a few weeks the US situation will be far worse.

As the US had two months warning of the threat of the coronavirus, the job of leading figures in the US should have been to prepare the American people for this – drawing on the experience of China and every other country which had important lessons.

Some US institutions did that. Johns Hopkins University has done one of the world’s best jobs in providing real-time data on Covid-19’s spread. But, unfortunately, other US leading figures, instead of facing reality, spread propaganda therefore obstructing the American people from preparing for the deadly coming threat.

A typical example is Ian Bremmer, president and founder of the Eurasia Group, the most influential US political risk consultancy – normally a serious analyst, well worth reading. Unfortunately, in this case, faced with a situation where the US response has been disastrous, he abandoned objectivity. For example, on March 31, Bremmer claimed, on the basis of no evidence, that China had more coronavirus cases than the US despite both the WHO and Johns Hopkins University showing the exact opposite.

The dynamic of the rise of US coronavirus cases meant Bremmer’s claim had no credibility within days – at the time of writing, Johns Hopkins University’s real-time data finds 368,000 cases in the US compared to 83,000 in China. Similarly, on April 3, Bremmerstated with reference to the US propaganda channel Radio Free Asia, based on ‘Wuhan residents,’ that there had been 40,000 deaths in the city.

Wuhan residents suggest that more than 40,000 locals have died from #COVID19. China's official narrative says that Wuhan's death toll is around 2,500. #HardNumbershttps://t.co/JLP7qwxUso

Fortunately, almost no serious figures outside the US were prepared to pass on such material or simple propaganda.

The G7 bluntly refused US Secretary of State Mike Pompeo’s demand that Covid-19 should be referred to as the ‘China virus.’ Canada’s health minister straightforwardly said: “There’s no indication that the data that came out of China in terms of their infection rate and their death rate was falsified in any way.” She bluntly replied that the reporter who asked her this question at a press conference was “feeding into conspiracy theories.”

Regarding the situation in China itself, in addition to all serious statistical studies, it is simply necessary to look at the videos of its city streets gradually beginning to refill. I know from my numerous daily discussions that six weeks ago people were naturally very scared. This is a literal life-and-death matter – no government propaganda would get people back on the streets if they were not beginning to feel safe again. Even more significantly, if they were not really safe, these filling streets would produce literally so many thousands of dead it would be impossible to conceal.

Theory versus the real world

Figures in America subscribed to the theory that the US must be the best – ‘the greatest country in the world.’ Therefore, it was impossible by definition that China should have succeeded in dealing with the coronavirus threat more successfully than any other country, while the US failed. Therefore, instead of undertaking the vital lesson of learning from China’s successful fight against the virus, US figures attempted to deny reality. This contributed significantly to the US being unprepared to fight the coronavirus – with the consequences that the US is now suffering the world’s worst coronavirus disaster.

Reality is strictly objective and cannot be cheated. Those who attempt to do so in serious matters damage themselves. The coronavirus will not be stopped for an instant by claims that the US is always best  – or that China has not been successful in fighting the virus. Those in the US who refused to base themselves on reality have contributed to a disaster in their own country.

Self-delusions in leading circles in the US have previously led it to geopolitical disasters – in Vietnam, Iraq, in believing Russia would accept the US’ aggressive expansion of NATO. Now these self-delusions have led to a disaster on American soil itself. It is to be hoped that the American people will extremely rapidly draw on the lessons, save the lives of many tens of thousands of their own citizens, and force their leaders to enter into more general, rational relations with the world.