Part two of the theater play that began with the Turkish military’s occupation of Jarablus ten days ago continued today in the small border town of Al-Rai to the west.

Twelve Turkish tanks and a number of armored vehicles led a staged military offensive that began at around 13:30 local time on the afternoon of Saturday, September 3. Ground forces of the Turkish army crossed the border into Syria from Salahan village in Elbeyli district of Kilis province.

Local sources report that there has been no fighting in the town since the beginning of the military operation and that militants of Al-Qaeda affiliated groups also entered the town.

As the Turkish army pretends to be engaged in clashes with ISIS, rockets were earlier fired from the Al-Rai area into the Turkish city of Kilis, located northwest of Al-Rai five km from the Syrian border. Some reports say the rocket attack wounded some civilians [Anadolu Agency‘s report on the rockets is here].

A larger target of the Turkish operation is the small city of Al-Bab, to the south of al-Rai. This is part of Turkey’s aim of separating the Kurdish-populated and controlled cantons east of the Euphrates River from the Afrin region in the west.

In mid-August, the Syrian Democratic Forces announced the formation of a military council of Al-Bab in anticipation of a drive to liberate the city from ISIS control. This was to follow the success of the hard battle in July and early August to liberate Manbij from ISIS. Manbij lies halfway between Jarablus and Al-Bab. 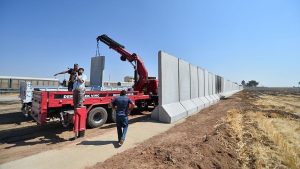 Construction of border wall by Turkey continues along its eastern border with Syria, Anadolu Agency, Sept 3,2016