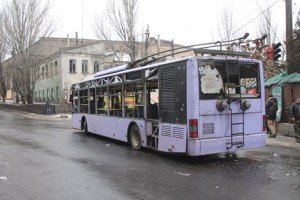 A mortar attack in the city of Donetsk on January 22 struck a transit bus, killing 13 people and injuring many more. According to defense officials of the Donetsk Peoples Republic, the attack was conducted by a terrorist cell of the Ukraine army. Several Ukraine army personnel were arrested after the attack.

It was the only one of a hailstorm of murderous attacks unleashed by the Ukraine army in a military offensive begun ten days ago. The offensive was months in preparation. According to the Kyiv Post on January 25, it is fast coming undone.

The attack in Donetsk took place in the Leninsky district of the city during the morning commute to work. Two mortars struck landed on a busy street, destroying the interior of the bus and shattered the windows of nearby buildings. Here is a detailed news report on RT.com, and here is a video of the aftermath of the attack:

And Here is a video report (sub-titled) on the attack, by Russian news service Life News.

This attack follows an earlier one on a bus near Volnovakha in Ukraine-controlled territory on January 13 that killed 12 people and injured 17. The Kyiv government instantly accused Donetsk self-defense forces and went on to use the attack as a public relations prop for launching its military offensive. The government staged rallies across Ukraine borrowing on “anti-terrorist” themes being used in France to condemn the killings in Paris at the offices of Charlie Hebdo on January 7.

The attack site at Volnovakha was beyond the range of weapons of self-defense forces, but that small detail was of no consequence for the propaganda drive that followed.

The driver of the Volnovakha bus was interviewed by the newspaper Korrespondent days later and he says that while there was rocket shelling along the road the bus was traveling (a video of multiple rocket shells landing was broadcast on the Internet), it was a fragmentation mine near a Ukraine army checkpoint that detonated and killed the passengers.

Nearly two weeks later, the Ukraine military and its allied, right-wing militias are suffering significant military reverses. They lost their last toehold at the Donetsk airport one week ago and are being pushed back from the demarcation line established by the ceasefire that was reached in Minsk, Belarus last September 5. (See a Jan. 23 situation report here and a Jan. 24 report here.)

The city of Gorlovka has suffered very heavily from Ukraine shelling. A report by an anarchist activist in the city was published on the Ukrainian left website Liva.com on January 22. He reported,

The artillery shelling of Gorlovka lasts 14 hours. 840 minutes of fear. 50,400 seconds. During this time, Gorlovka is turned into a giant adrenaline-filled place. Hours of explosions, then – ten-minute breaks, the firing again.

The city is under a hail of GRAD rockets, cannons, mortars, machine-gun fire. There is the constant noise of gnashing, hissing, whistle, screeching. Damp basements are filled with children hugging with their tired parents. Tired and exhausted doctors and nurses are helping the wounded. Bus and taxi drivers who try to take passengers to bomb-shelters are under constant fire.

Another horrific shelling took place against the town of Stakhanov in Luhansk region on January 21. Kristine Rus of Fort Russ website has translated a news report and provided video of that attack. Local people say ten people were killed and many more injured, including children.

A Ukrainian military official made an extraordinary admission of war crimes when talking about Ukrainian shelling to a Ukraine news source on or about January 19. Vladimir (Volodymyr) Ruban, is an officer who led negotiations for prisoner exchanges between the Donbas insurgency and the Ukrainian army, earning some grudging respect in that role. But in the interview, he explains that the Ukrainian army has been shelling civilians in cities and towns in an effort to instill fear and submission. Artillery is quite a precise profession, he says. A professional does not miss a target. The very strong implication in his words is that the Ukrainian military is deliberately shelling civilians.

Amidst all the carnage, the foreign ministers of Russia, France, Germany and Ukraine met in Berlin on January 21 and talked about establishing new ceasefire demarcation lines and moving heavy artillery away from them. But this has become a tired refrain that has done little to ease the suffering in eastern Ukraine.

Pro-autonomy rebels in eastern Ukraine say they are fighting to establish control over the entirety of the territory of the peoples republics of Donetsk and Luhansk, former regions of Ukraine. (The territory is also called ‘Novorossiya’, by those who want to have either a federated status in Ukraine or an independent republic.

As to the perilous humanitarian situation in the region, Fort Russ provided insight into the work of providing humanitarian aid in the form of an interview with a citizen of Ukraine several weeks ago. Kiril Tyutyunik traveled to the conflict zone to learn how, exactly, he could provide the best assistance. He is like many people in Ukraine and especially in Russia who are organizing to provide assistance; sometimes with the cooperation of Russian border officials, sometimes not.

While all of this is going on, Ukraine president Petro Poroshenko was recently in Davos, Switzerland meeting with international financiers to try and salvage Ukraine’s devastated economy. Russia Insider writer Alexander Mercouris writes that the task will be extremely daunting.

Protests are growing in Ukraine against the government’s resumption of war and also against devastating factory shutdowns and cuts to government services that have thrown tens of thousands of workers out of work.

Antiwar protests are typically confronted by gangs of right wing extremists intent on shutting them down. For example, the Special Monitoring Mission (SMM) in Ukraine of the Organization for Security and Economic Cooperation in Europe (OSCE) reported in its daily report of January 2:

The SMM spoke to a woman who identified herself as a member of the “Union of Ukrainian Mothers”, a civic organization, present for the reconciliation gathering. She told the SMM that 30 to 50 participants had gathered on the square to collect signatures in support of a peace process when the aforementioned young people arrived and argued with those at the reconciliation gathering. The SMM spoke to counter-protestors who said they wanted to stop these activities organized by what they call “IDPs and Russian activists”.

And here is a video of an assault by a right-wing gang against elected officials in the city of Kharkiv on January 21. They want the city to spend more of its municipal budget on war.

Poroshenko told media in Davos that “9,000” Russian soldiers have invaded Ukraine in this latest round of fighting that his government has provoked. This is the umpteenth accusation of ‘Russian invasion’ since Kyiv launched its war in eastern Ukraine last April. Like the others, this one has no foundation. Indeed, the OSCE mission in Ukraine explained in its weekly report of January 21, 2015 that border crossings it observed between Russia and Ukraine consisted of the following categories of people: families on foot or by car with a lot of luggage, elderly people with few bags, adults (usually of younger age) with no luggage or empty cars, and people wearing military-style clothes with or without backpacks.

But that doesn’t stop Western media from faithfully reporting one “Russian invasion” after another as fact.

Meanwhile, Fort Russ has translated a news report about where, exactly, the rebel acquires much of its weaponry. Much of it comes from retreating or captured units of the Ukraine army and militias.