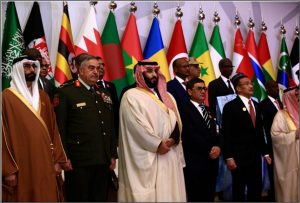 Saudi Arabia’s Crown Prince Salman has vowed to “wipe” terrorists from the “face of the earth” using resources available to the Islamic Military Alliance (IMA), a so-called ‘Arab NATO’ which claims to be targeting a “faceless enemy,” rather than any particular “sect” or “country.”

Formed in 2015 by then-deputy Crown Prince and defense minister of Saudi Arabia, Mohammed bin Salman, the IMA has so far only functioned on paper. Now the Crown Prince wants to take his brainchild to the next level by declaring a total “war against terrorism” during the Sunday summit of IMA, also referred to as the Islamic Military Counter Terrorism Coalition (IMCTC) or the “Arab NATO”.

“Today we start the pursuit of terrorism, and we see its defeat in many facets around, the world especially in Muslim countries… We will continue to fight it until we see its defeat,” Prince Mohammed bin Salman told defense ministers from nearly 40 Muslim-majority countries who have gathered in Saudi Arabia for the military coalition’s summit.

“In past years, terrorism has been functioning in all of our countries… this ends today, with this alliance,” he declared in his opening remarks.

The “Islamic” alliance, officially comprising 41 member states, does not include any countries with Shia-dominated governments, such as Iran, Iraq or Syria. Due to the economic and diplomatic blockade of Qatar, which in June was accused by Saudi Arabia, Egypt, the United Arab Emirates and Bahrain of sponsoring terrorism, Doha’s delegation was also not present at the summit in Riyadh.

The pan-Islamic Sunni-dominated front declared two years ago that it intends to also battle the use of Islam by terrorists, reaffirming this principle on Sunday. A retired Pakistani four-star General Raheel Sharif was appointed as commander-in-chief to lead the fight against radical extremists who continue to “tarnish” Islam.

“The biggest threat from terrorism and extremism is not only killing innocent people and spreading hate but tarnishing the reputation of our religion and distorting our belief,” the Crown Prince said. “We will not allow this to happen.”

In May, during the Arab-Islamic-US Summit, the Saudi-led countries agreed to reserve up to 34,000 troops for potential anti-terrorist operations in Iraq and Syria. However, the key battles against terrorists in those countries are now all but over, as both Iraqi and Syrian militaries are finishing off the remnants of once organized terrorist fronts on their territories. The Islamic Military Alliance, however, maintains a different view, claiming that “terrorism represents a constant and growing challenge” to regional and international security.

Although General Raheel Sharif claimed that the alliance is not united against any particular “country or any sect,” but rather against the “faceless enemy with extremist ideology” – the key coalition member Riyadh has recently been openly calling Iran the “number one state sponsor of terrorism.”

The Crown Prince even went as far as calling Iran’s supreme leader “the new Hitler of the Middle East” last week, in the wake of a missile attack on Saudi airport from Yemen, which Riyadh blamed on rebels and their sponsor Tehran.

Widely seen as a proxy war between Saudi Arabia and Iran, the conflict in Yemen begain in 2014 when rebels captured the capital and forced the government to flee and seek Riyadh’s military help. The Saudi-led intervention, however, has so far failed to return the deposed Yemeni leader back to power, but already resulted in thousands of civilian casualties and a humanitarian disaster of an unprecedented scale condemned by humanitarian organizations worldwide.

Besides going after the extremist ideology, the Arab nations are also ready to combat terrorism in the communications domain by countering extremist propaganda, and in the financial sphere by going after the sources of terrorist funding.

“The vision of IMCTC is to have a collective response against terrorism capable of leading and coordinating the efforts of member countries with high efficiency and effectiveness,” said Pakistan’s former military chief, noting that over 200,000 people had been killed in some 70,000 terror attacks in the region in recent years.

At the end of the summit, the countries agreed to coordinate and integrate military efforts, as well as to share intelligence and conduct training courses and joint exercises. The military participation of the coalition states, however “will be defined in accordance with each country’s capabilities and resources, as well as in accordance with each country’s desire to participate in a given military operation,” their declaration said, announcing the creation of a joint operations center in Riyadh.

… Alongside leading a diplomatic charge against Qatar, Saudi Arabia is also leading a war against Iran-aligned Houthi rebels in its neighbor Yemen.

Lebanese prime minister’s decision to return to Beirut came after a behind-the-scenes agreement was reached with Hezbollah, via President Aoun

Is Saudi crown prince winning or losing in the Middle East?

By postponing his resignation, announced under seeming duress in Saudi Arabia on Nov. 4, Lebanese Prime Minister Saad Hariri struck a blow in support of Lebanese sovereignty and against interference in his country’s affairs by Saudi Crown Prince Mohammed bin Salman.

Last week, we wrote that Hariri was “his own witness in a court of conscience” about what took place in Saudi Arabia, and what would happen next. If he had followed through on Prince Mohammed’s diktat to resign and rally opposition to Iran and Hezbollah, in Lebanese politics, a popular backlash would have likely been the result, costing Hariri, and those who might have backed him, a catastrophic loss of face. Nobody was buying that you can be a champion of “sovereignty” at the behest of a regional power. And Hezbollah, despite its now frequent characterization as a “proxy” of Iran, is a Lebanese political party with its own popular and formidable constituency.

With Hariri’s decision to stay on, the center holds in Lebanon, at least for now. In addition to Hariri, credit goes to Lebanese President Michel Aoun’s steady statecraft and the resilience of the Lebanese people, who saw through the Saudi-created fiasco. Hariri’s remark Nov. 22 — “We are staying together to be the first line of defense for Lebanon” — should remain the rallying point for Lebanon to address its many challenges.

The final chapter is not yet written. The Wall Street Journal reports that Saudi Oger, the Riyadh-based construction company owned by the Hariri family, is “now relying on the Saudi government — its main client — to pay millions of dollars in wages owed to the company’s former workers, say former employees. Saudi officials are also investigating the company’s finances, said a former senior manager at the company.”

As the crown prince stumbles in the region, Iran continues to roll. The prince’s intervention in Lebanon has revealed, again, the limits of his influence and the costs of his impulsive regional policies, which redound to Iran’s benefit.

Yemen, for example, remains a failure and quagmire for the kingdom — the “worst humanitarian catastrophe in the world,” Bruce Riedel writes, with 7 million people on the verge of starvation.

“Riyadh does not have a strategy to win the war,“ Riedel continues. “The front lines have barely moved in months. The Houthis show no sign of giving up. More airstrikes are not likely to bring a decision. So the Saudi strategy by default is to rely on famine and disease to wear down the Yemeni people. All sides in this war are guilty of perpetuating a catastrophe, but the blockade and airstrikes are the principal cause of the famine and cholera. The Saudi government and leadership should be held accountable for their actions. A strategy of starvation is unacceptable.”

Giorgio Cafiero adds that conflict in Yemen offers the Islamic State “new opportunities and grievances to exploit as the internationally recognized central government remains entirely ineffectual. Should IS-Yemen lure more highly trained and battle-hardened fighters from the Levant, the local offshoot of IS could become an increasingly ascendant force to be reckoned with in southern Yemen, adding new dimensions of complexity and instability to the country’s civil war and growing famine threat.”

The kingdom’s isolation of Qatar has undermined Gulf Cooperation Council unity, another windfall for Iran. Cafiero explains the limitations of the “Anti-Terror Quartet” of Saudi Arabia, the United Arab Emirates, Egypt and Bahrain in building a new regional alignment, given differing perspectives on how best to deal with Turkey and Iran. Meanwhile, Iran — allied with both the Syrian and Iraqi governments — comes out a winner in both countries, while Saudi Arabia scrambles for a foothold.

Mohammed’s record of frustration may have implications for any perceived gains from the now open secret of an emerging Saudi-Israeli entente to broker an Israeli-Palestinian peace settlement and counter Iran. Ben Caspit writes, “Peace between Israel and Saudi Arabia is not about to break out anytime soon. On the other hand, Israel is an unofficial member of the Sunni alliance led by young Saudi Crown Prince Mohammed bin Salman. For the past two years, he has been setting the Middle East on fire with a series of audacious moves.” Given the regional climate, it is fair to ask whether Palestinian President Mahmoud Abbas will succumb to Saudi pressure to agree to a peace settlement or resign, as Adnan Abu Amer reports. Whether Saudi Arabia can “deliver” the Palestinians is an open question.

If the Trump administration is looking to back a winner in the Middle East, then it might think again about the seeming unconditional love offered Riyadh. Saudi Arabia should of course be a pillar of US strategy and posture, but given the scorecard to date, Washington may be overdue in counseling some restraint. As we wrote two weeks ago, “The Trump administration should send a clear signal to the crown prince that the United States does not necessarily have his back in any and all confrontations with Iran, while urging a try at diplomacy between Tehran and Riyadh, which is essential and long overdue.”

The courage and example of the Lebanese people to stand for sovereignty and against interference cannot be undersold. The country cannot escape its geography, at the crossroads of the Saudi-Iranian and Israeli-Iranian regional fault lines, and with over 1.5 million Syrian refugees within its borders. The trend, and pulse, of Lebanon, cannot be denied or ignored. We suggested back in 2014 that an exciting new post-sectarian social contract in Lebanon may be emerging, writing that “the failures and dashed expectations of the uprisings in Egypt and Syria, which quickly fell prey to regional and ideological agendas and violence, and Lebanon’s own tragic past, could make it an incubator for a new approach to governance that would allow Lebanon to realize its potential, rather than fall victim to the rhetoric and false promise of what was once known as the Arab Spring.”