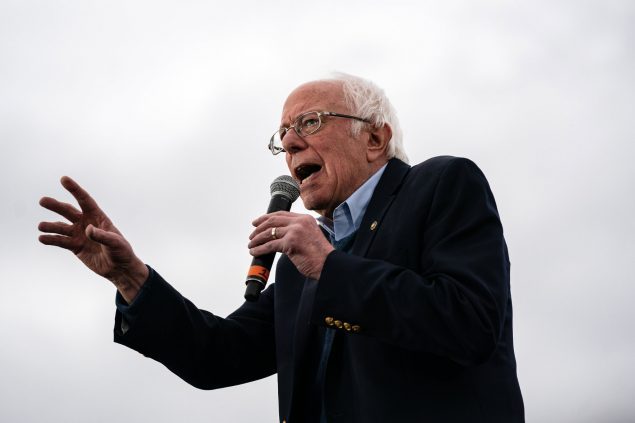 From a tax on Wall Street speculation to slashing the military budget, Sanders’ presidential campaign summarized how it would pay for its plans.

Confronting head-on incessant claims from rival Democratic presidential candidates and the media that he has not explained how to “pay for” his sweeping progressive agenda, Sen. Bernie Sanders Monday night unveiled a fact sheet summarizing how he would finance Medicare for All, a Green New Deal, canceling all outstanding student loan debt, universal childcare, and other major campaign proposals.

“I thought that question might come up. All right. Here it is,” Sanders, the 2020 Democratic presidential frontrunner, said during a CNN town hall, handing moderator Chris Cuomo a print-out of the fact sheet. “This is a list, which will be on our website tonight, of how we pay for every program that we have developed.”

BERNIE SANDERS BROUGHT THE RECEIPTS ON HOW TO PAY FOR #MEDICAREFORALL AND HANDED THEM TO CHRIS CUOMO!!! THE TEENS LOVED IT!! #CNNTownHall pic.twitter.com/ecwTgztJEs

Shortly after Sanders handed the document to Cuomo, the senator’s campaign posted the fact sheet—titled “How Does Bernie Pay for His Major Plans?“—to its website. The fact sheet comes just hours before 2020 Democratic presidential contenders are set to take to the debate stage Tuesday night in South Carolina ahead of the state’s primary on Saturday.

“A lot of my opponents like to say I can’t pay for my agenda to help the working people of this country,” Sanders tweeted. “They’re dead wrong.”

In the section on Medicare for All, the most heavily scrutinized of Sanders’ proposals, the campaign pointed to a recent Yale study to emphasize the massive cost-saving potential of single-payer and proposed a “menu of financing options” that Sanders’ team says would “more than pay for the Medicare for All legislation.”

The menu includes hiking the top marginal tax rate on income over $10 million to 52%, repealing the GOP corporate tax cut and restoring the corporate rate to 35%, taxing capital gains at the same rate as wages, and enacting a 4% “income-based premium paid by employees” that exempts the first $29,000 for a family of four.

To fund his plan to wipe out student loan debt and make public colleges, universities, and trade schools tuition-free—which the Sanders campaign estimates would cost $2.2 trillion over the next decade—Sanders would implement a “modest tax on Wall Street speculation that will raise an estimated $2.4 trillion over ten years.”

“This is the wealthiest nation on Earth. People should not have to go a quarter of a million dollars in debt to get an education,” Sanders said during the CNN town hall. “And that is why I have proposed, and will fight for, a proposal that imposes a modest tax on Wall Street speculation—we bailed those guys out 12 years ago.”

“A modest tax on Wall Street speculation,” said Sanders, “will pay for making public colleges and universities tuition-free and canceling all student debt.”

People should not have to go tens or hundreds of thousands of dollars into debt to get an education. That is why I will fight to cancel student debt with a modest tax on Wall Street speculation. #CNNTownHall pic.twitter.com/Iri1PRW6R0

Sanders’ $16.3 trillion Green New Deal proposal, according to the campaign, would be funded by slashing military spending by $1.215 trillion over the next decade; eliminating federal fossil fuel subsidies and making companies “pay for their pollution, through litigation, fees, and taxes”; and “generating $6.4 trillion in revenue from the wholesale of energy produced by the regional Power Marketing Administrations.”

The Vermont senator emphasized during the town hall Monday night that while his proposals are frequently portrayed as fringe by pundits and other Democratic presidential candidates, they are quite popular among the U.S. public.

“You know, if you look at the media, they say Bernie’s ideas are radical, they’re extreme, they’re out of the mainstream,” Sanders said. “Let me just tell you, I don’t think that that’s true.”

“Is raising the minimum wage a radical idea?” Sanders asked the town hall audience, which responded with an emphatic “No!”

Sanders asked the same question of tuition-free public colleges and universities, Medicare for All, and his aggressive plan to combat the climate crisis, and the audience agreed that such proposals are not “radical.”

“I rest my case,” said Sanders.

People say @BernieSanders is too radical.

In an op-ed for The Guardian on Sunday, economist and former Labor Secretary Robert Reich pointed out that critics of the supposedly enormous cost of progressive policy proposals “omit the other side of the equation: what, by comparison, is the cost of doing nothing?”

“A Green New Deal might be expensive but doing nothing about climate change will almost certainly cost far more,” wrote Reich. “Medicare for All will cost a lot, but the price of doing nothing about America’s increasingly dysfunctional healthcare system will soon be in the stratosphere.”

“We can no longer pretend that climate change, a wildly dysfunctional healthcare system, and a yawning deficit in public investment pose insignificant challenges,” Reich added. “Doing nothing or doing too little will make them far worse. Obsessing about the cost of addressing them without acknowledging the cost of failing to address them is dangerously irresponsible.”