At a meeting in Vienna on October 8 of the Organization for Security and Cooperation in Europe (OSCE), Russia’s ambassador to the body condemned Ukraine’s ongoing economic blockade against Donetsk and Lugansk regions (Donbas) in eastern Ukraine as well as its other violations of the Minsk-2 ceasefire agreement. The meeting was devoted to the situation in Ukraine and the Minsk-2 ceasefire agreement signed in Minks, the capital of Belarus, on February 12, 2015. 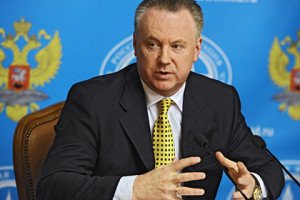 The full text of Ambassador Alexander Lukashevich’s address is enclosed below. He told the meeting,  “Some progress has been made in prisoner exchanges, and the delivery of international humanitarian aid has become possible. Over the past week, dozens of trucks were able to deliver assistance to those in need.

“But the inhumane blockade of Donbass persists. Local residents have no access to pure drinking water, which is a gross violation of international humanitarian law. Restrictions on the citizens’ freedom of movement remain in force.”

His speech also cited other conditions of the agreement which Kyiv has failed to respect.

Ukraine’s ongoing violations of the Minsk-2 Ceasefire Agreement have gone unreported in Western mainstream media. The specific terms and conditions of the agreement also go unreported. These include the obligation on the government in Kyiv to lift the economic blockade against Donbas and to negotiate with the leaders of the Donetsk and Lugansk people’s republics. Representatives of all three governments are signators of Minsk-2.

Instead, the mainstream press is taking its lead from the new media strategy of Kyiv which has come into place since it was obliged six weeks ago  to accept a ceasefire protocol beginning on September 1, 2015.  Acceptance of the ceasefire protocol came about due to EU pressuring and the impossibility of Kyiv continuing to ignore its internal political and economic crisis (including, we learn, the threat of a polio epidemic among Ukraine’s child population due to government neglect of vaccination during the past two years).

The new media strategy consists of Kyiv presenting itself as devoted to an ill-undefined “ceasefire” and “peace”, including throwing the word “Minsk” into the mix. Meanwhile, Kyiv’s foreign minister proclaims there will be no amnesty for Donbas self-defense fighters (clause five of Minsk-2) and there will be no recognition of special status for the Donetsk and Lugansk republics (clauses 11 and 12). Kyiv’s ongoing economic blockade is a violation of clause eight.

The mainstream press does not report the 13, specific conditions set out in the Minsk-2 agreement, nor does it report that the agreement carries the full weight of the United Nations Security Council. The Security Council endorsed Minsk-2 on February 17.

Remarks by Permanent Representative of the Russian Federation to the OSCE Alexander Lukashevich at the OSCE Permanent Council’s meeting on the situation in Ukraine and the need to comply with the Minsk Agreements, Vienna, October 8, 2015

Published by the Ministry of Foreign Affairs of the Russian Federation, Oct 8, 2015 (emphasis added by New Cold War.org)

We would like to express cautious optimism regarding the budding progress in terms of the stabilisation of the situation in Ukraine and the prerequisites for implementing the provisions of the Minsk Package of Measures, which emerged at the latest meeting of the Contact Group on October 6. In this context, the direct dialogue between Kiev, on the one hand, and Donetsk and Lugansk, on the other hand, remains a key, no-alternative condition for the successful implementation of the provisions of the document that directly provide for joint efforts in coordinating the political aspects of the Ukrainian settlement.

The ceasefire regime along the line of contact in Donbass is increasingly stable. Its further consolidation will be promoted by the complete implementation of the agreements on pulling back from the contact line all types of tanks and artillery of a 100-mm caliber and smaller and mortars of a 120-mm caliber and smaller. We welcome the start of the practical implementation of its first stage – the pullback of the armed forces of the Lugansk People’s Republic and the Ukrainian military, and the Special Monitoring Mission’s active involvement in verifying the weapons withdrawal.

Guaranteeing that there are neither these nor heavier weapons in the security zone is an indispensable condition of the non-resumption of artillery bombardment of cities and populated localities in Donbass. This is why we emphasise once again that the SMM should focus its efforts on patrolling the security zone.

We note the need for the OSCE observers’ strictest adherence to an equal, “mirror-image” approach to both sides. The monitoring and verification of the weapons pullout and the control of military storage sites should be exercised evenly on both sides of the contact line and be reflected in SMM reports accordingly. Regrettably, certain reports display a difference in presenting information regarding violations of the same order committed by the Kiev military and the self-defence forces.

This applies in full to using observation equipment whose employment “in the field” should be coordinated with all sides. It is necessary to discontinue the practice of holding preliminary, detailed discussions of drone routes with one side, while providing only general orientations to the other.

Saturating the security zone with observers, including by establishing permanent observation posts and forward patrol points, should facilitate the implementation of p. 2 of the Package of Measures on the pullout of heavy weapons as well.

We agree with the SMM’s estimates that unexploded artillery shells and minefields pose a serious threat to Donbass residents. This problem must be solved in a comprehensive manner by coordinating with the parties to the conflict during the talks in the Contact Group.

The stabilisation on the contact line makes it possible to step up work on the other points of the Package of Measures. The Normandy Four summit meeting  in Paris on October 2 made it possible to remove misunderstandings as per the individual requirements of the Minsk Package of Measures and reaffirm that it has no alternative as the basis for a peace settlement in Donbass. Approved by a UN Security Council resolution, this document remains the only efficient roadmap with clear logic and a sequence of interconnected steps directed at settling the internal conflict in Ukraine.

The main effort should now be focused on implementing the political aspects of the Package of Measures that Kiev has openly dragged out under different pretexts.

The law on the special status of Donbass is inoperative; the law on amnesty is nonexistent. The amendments to the Constitution, whose centerpiece should be decentralisation, focusing on the specific features of Donbass, have not been coordinated with the region’s representatives.

The Ukrainian authorities are demonstrating the same approach with regard to p.10 of the Package of Measures. Instead of disarming the illegal groups, they incorporated such groups into the Ukrainian armed forces and have legalised foreign mercenaries. These innovations have nothing to do with the Minsk Agreements.

Today, after the Paris meeting, we hope that Kiev will take real steps rather than simulate them. Further procrastination is not in the interest of the Ukrainian people or their European partners. By shirking the direct dialogue with Donetsk and Lugansk and the coordination of election modalities with them, Kiev has lost the chance to hold local elections on a national scale on the single voting day in October.

After Donetsk and Lugansk decided to postpone the elections in some areas, a step that was welcomed by Moscow, Brussels and Washington, Kiev is being given yet another chance and time to comply with all of the necessary political commitments under the Minsk Package of Measures.

We would like to remind, however, that the postponement of the local elections does not mean that Kiev can drag its feet on implementing the political understandings under Minsk-2 ad infinitum. Kiev does not have any other parties with whom it can coordinate the election modalities other than those who really control the situation in separate areas of the Donetsk and Lugansk regions and whose signatures figure under the Package of Measures.

In this context, we expect Kiev’s representatives in the Contact Group and its relevant subgroups to display a constructive approach towards the dialogue. The work on the law on local elections in separate areas of the Donetsk and Lugansk regions, on coordinating the permanent law on the special status of Donbass, and on implementing the Minsk provisions on amnesty and non-persecution in connection with events in Donbass will be a test of its good-faith approach.

We believe that positive shifts in the humanitarian and economic areas should also provide an additional impetus to the Minsk process. There is progress towards an exchange of prisoners; it has become possible to deliver international humanitarian aid, with dozens of lorries having brought humanitarian aid to those who need it over the last week alone.

But the inhumane blockade of Donbass continues and local residents have no access to clean drinking water, which is a gross violation of international humanitarian law. Restrictions on the freedom of movement remain in force as well.

Nevertheless, the latest meetings on Ukraine make it possible to hope that the months-long international efforts to help settle the internal political crisis in Ukraine, including efforts made by the OSCE, will not have been in vain. The chances for success depend on Kiev’s further good-faith implementation of the obligations enshrined in the Minsk Package of Measures and on its readiness to look in practice for joint solutions to problems existing in eastern Ukraine in the interests of preserving the unity and territorial integrity of Ukraine.

Thank you for your time.

Text of the Minsk-2 Ceasefire Agreement, signed in Minsk, Belarus on Feb 12, 2015