With less than six months to go before Ukraine’s presidential election, the country’s unpopular leader, Petro Poroshenko, has set himself the ambitious task of dismantling the canonical Ukrainian Orthodox Church, which is an autonomous part of the Russian Orthodox Church, and creating a single national church out of the many Christian denominations in his country. His initiative may or may not win him extra points at the March 2019 poll, but it has already exacerbated frictions with Russia, re-opened old confessional wounds in Ukraine and now threatens to divide Orthodox Christians worldwide.

Poroshenko’s efforts rely on a fragile marriage of convenience with a major ally who is likewise trying to boost his political clout at Moscow’s expense: Ecumenical Patriarch Bartholomew of Constantinople. Propelled, according to Patriarch Bartholomew, by requests from “the honorable Ukrainian Government,” his patriarchate’s Holy Synod on Oct. 11 decided to restore the legitimacy of two Ukrainian clerics leading shismatic churches not acknowledged by Moscow or any of the other 13 autocephalous Orthodox churches. By doing so, the Synod de facto delegitimized the canonical Ukrainian Orthodox Church, which is closely tied to its Russian counterpart. The Moscow Patriarchate has called the act an “illegal intrusion” into its “canonical territory.”

While Poroshenko and Patriarch Bartholomew have cast the church split as a struggle against undue Russian influence in Ukraine, this simplistic narrative does not address either what critics describe as the president’s radical departure from Western notions of separation of church and state, or the consternation that the ecumencial patriarch’s actions have stirred up among the world’s other Orthodox churches. 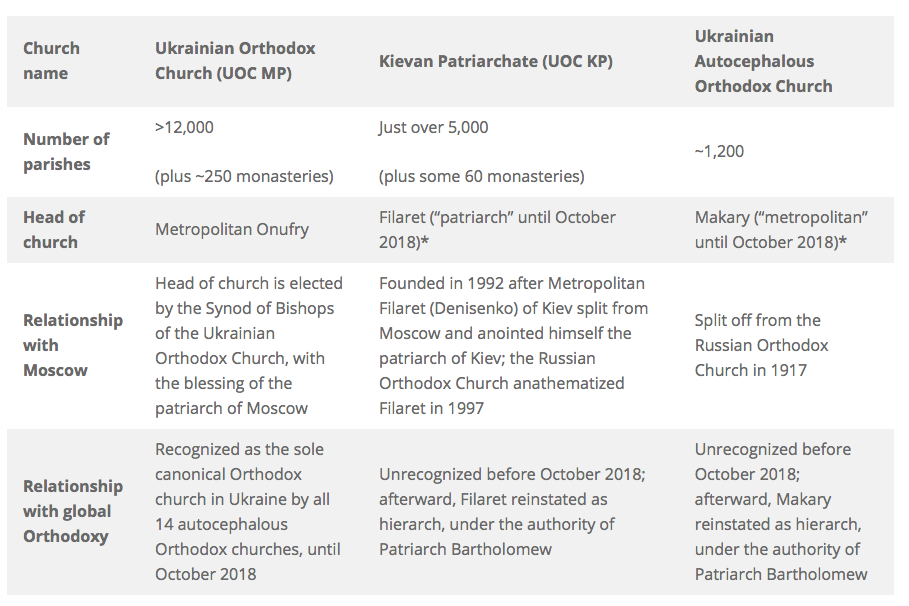 * The Holy Synod’s decision says merely that the two are “restored in rank” without specifying that rank; for Filaret, that is no doubt still being negotiated.

In early 2018, Poroshenko unexpectedly declared that Patriarch Bartholomew would soon issue a tomos (the Greek term for an official church document) on independence, or autocephaly, for the Orthodox Church in Ukraine. He described the issue as “critical” for Ukrainian statehood, and urged the Ukrainian parliament to support his appeal to the patriarch, which it did in April.

Poroshenko’s timing is not hard to explain. Church unity is an issue whose time has come because presidential elections will take place in March and Poroshenko is very far behind in the polls, hovering between 6 and 12 percent as of September, compared to 10-19 percent for frontrunner Yulia Tymoshenko, a former prime minister. It has been obvious since 2015 that his political course has little appeal in eastern and southern Ukraine. His electoral base, such that it is, lies primarily in western and central Ukraine, which is also the regional base of the Kievan Patriarchate. Even there, however, he is running third, at best.

Thus, Poroshenko’s only chance for re-election is to make it to the run-off round, and he can only hope to do so if he first wins decisively in the west and center. In this part of the country he could plausibly take votes away from his key rivals, Tymoshenko and former Defense Minister Anatoly Hrytsenko, by promoting a more nationalist agenda. His rivals are reluctant to do so, because they are also trying to appeal to voters in the east and south.

As an electoral strategy such an approach makes sense: According to a recent poll, 54 percent of Ukrainians nationwide support autocephaly, with the number going up to 68 percent in the west and 58 percent in the center; only 19 percent nationwide oppose the measure.

Nonetheless, for the nation as a whole, the strategy is a risky one: Over half of respondents among parishioners of the canonical Moscow-aligned church oppose autocephaly, while 28 percent support it. Any dramatic change in the religious status quo could provoke public demonstrations in the hundreds of thousands, which both the Kievan Patriarchate and the Ukrainian Orthodox Church have shown themselves quite capable of organizing. Accentuating their division during an election year might seem ill-advised, but Poroshenko seems convinced that this is the only strategy that gives him any hope for re-election.

It is clear what Poroshenko stands to gain (or lose), but what does the ecumenical patriarch gain from this alliance? Simply put, a chance to prove his relevance to the Orthodox world. Since the Moscow Patriarchate’s own autocephaly in 1589, its size and influence have waxed, while Constantinople’s have waned. This has spawned a pattern of conflict that has expanded over time.

In the current dispute over jurisdiction in Ukraine, the ecumenical patriarch makes four points in support of the Synod’s decision. While the first three concern primarily arcane matters of canonical jurisdiction, the fourth argument, meant to cement the others, smacks more of geopolitics: “Since Russia, as the one responsible for the current painful situation in Ukraine, is unable to solve the problem, the Ecumenical Patriarchate assumed the initiative of resolving the problem.” (Moscow disputes all these assertions, arguing, among other things, that the right to appoint hierarchs in Kiev was granted to it in perpetuity.)

For now, we do not know how the other Orthodox churches will respond to the Holy Synod’s October decision. So far eight patriarchates (Alexandria, Antioch, Jerusalem, Moscow, Serbia, Bulgaria, Poland, the Czech Lands and Slovakia) have voiced serious concerns about Constantinople’s actions. Given their seniority, the objections of the three most ancient patriarchates—Alexandria, Antioch and Jerusalem—will be the most influential in determining how the Orthodox world interprets these events.

Meanwhile, Patriarch Bartholomew’s decision to assert personal control over his Ukrainian jurisdictions thrusts Constantinople directly into Ukrainian politics, since now he alone will appoint (and remove) the leadership of the church. Since the canonical Ukrainian Orthodox Church does not recognize his authority to do so, the Ukrainian government will presumably have to step in to enforce Constantinople’s decisions.

A Merging of Church and State?

If the government in Kiev takes steps to enforce the authority of the ecumenical patriarch, this will not only have implications for the daily life of the Orthodox church in Ukraine, but will profoundly alter the nature of church-state relations.

Last month, Poroshenko intimated that he would like to see the passage of controversial legislation that would give the state an extraordinary degree of power over church affairs, including the approval of leaders of religious organizations. Two such bills (draft laws No. 4128 and No. 4511) were proposed in 2016 by Ukrainian nationalists, who have long found it troubling that the majority of the country attends a church whose head resides in Moscow. But they were tabled in committee last year, after being roundly criticized as violating the separation of church and state guaranteed under the Ukrainian constitution.

By claiming the right to determine which religious organizations are legitimate and which are not, the president is also warning all religious organizations to toe the government’s political line. It is certainly no secret that the cardinal sin of the Ukrainian Orthodox Church in the eyes of the government has been its refusal to support the war in eastern Ukraine, which Metropolitan Onufry openly calls a “fratricidal conflict” and a “civil war.” With the establishment of a new church around the Kievan Patriarchate, Ukraine will have a de facto state church, and the fate of the canonical Ukrainian Orthodox Church will serve as a poignant lesson to others about the dire consequences of opposing the political establishment.

Filaret, the hierarch of the Kievan Patriarchate previously unrecognized by the canonical Orthodox churches, has been a major voice in this effort. Among religious organizations, his patriarchate was the notable exception that did not oppose legislation strengthening government control over church affairs. He expects that a new, unified Orthodox church independent of Moscow will become the church of the Ukrainian nation. Once it does, the “imperial” or “colonial” period, as he puts it, will finally be over and history can be re-written, with far reaching geopolitical implications: “Ukraine was never, is not and never will be part of Russia.”

Poroshenko has presented the struggle over an independent Ukrainian church as part of his country’s battle with Moscow and what he sees as its persistent colonial ambitions in Ukraine. Last month, in his state-of-Ukraine speech to parliament, he said that autocephaly for the Ukrainian church would be “the fall of the Third Rome, Moscow’s most ancient claim to global hegemony.” In May, he convinced three ex-presidents—Leonid Kravchuk, Leonid Kuchma and Viktor Yushchenko—to issue a statement supporting his initiative: “We are convinced,” the statement says, “that the unity of the Ukrainian people, the strengthening of which will in large measure result from the autocephalous orthodox local church, will become an insurmountable spiritual fortress in the struggle with Russian aggression against Ukraine.”

Russia has responded vigorously. A day after Constantinople’s decision to reinstate the two non-Moscow-aligned clerics, Filaret and Makary, Russia’s Security Council discussed the matter at a meeting led by President Vladimir Putin. Kremlin spokesman Dmitry Peskov told reporters that “Russia will defend the interests of the Orthodox” in Ukraine if developments there “take the course of illegal activities.” While Peskov insisted that such a defense would be diplomatic and political in nature, such language has made Ukrainians understandably nervous in light of Russia’s 2014 annexation of Crimea and military intervention in Donbas, where more than 10,000 people have already died as a result of the conflict.

There is also a real danger that the Ukrainian government will make the mistake of turning Metropolitan Onufry into a martyr for religious freedom, and a galvanizing symbol for Russophile Ukrainians, whose numbers are now higher than at any time since April 2014. It is an ominous sign that he has been added to the Myrotovrets (“peacekeeper”) website, a semi-official resource set up by advisors to the Ministry of Internal Affairs, which Ukrainian financial and government agencies use to identify “bandits and terrorists.”

Patriarch Bartholomew has sent two envoys (exarchs) to Ukraine to negotiate the following complicated dance: first, the recognition of Filaret’s Kievan Patriarchate and Makary’s Ukrainian Autocephalous Orthodox Church as canonical churches by the ecumenical patriarch; second, the relinquishing of their current independence, followed by integration and the acceptance of oversight from the ecumenical patriarchate; third, and finally, the granting of autocephaly to this newly constituted local Orthodox Church. Each of these steps would under normal circumstances take decades and the results should then be submitted for the approval of all the other local Orthodox churches. Filaret, however, insists that it be done before the presidential elections next March. (Ukraine’s Greek Catholics, initially part of the plan, have rejected any participation in it.)

For Filaret, too, there are tempting financial and political benefits to be considered. Speaking to the Atlantic Council in Washington D.C. in September 2018, he estimatedthat two-thirds of parishes would join the new “Ukrainian church.” When this happens, he said, “the Moscow Patriarchate will no longer be the largest in the world … and will not have so much influence.”

Attempts to create a new church, even if successful, are likely to further complicate efforts to re-integrate Donbas (and Crimea, if ever that becomes a possibility), since the canonical Ukrainian Orthodox Church is the only institution that has a presence throughout all of Ukraine, and is thus the only public institution that, in the words of Metropolitan Onufry, “holds the entire country together.”

Perhaps the only thing we can be certain of is that Poroshenko and the patriarchs have unleashed a process that will add considerably to the overall messiness of Ukrainian politics, and leave much bitterness in people’s hearts, long after the politicians and patriarchs are gone.

The opinions in this article are solely those of the author.