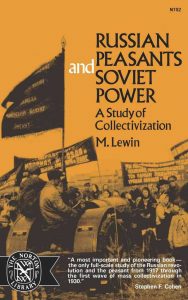 By Moshe Lewin. Translated from the French and first published in English as hardcover in 1968, by George Allen & Unwin Ltd. Originally published in French in 1966 as La Paysannerie et le Pouvoir Sovietique, by Mouton. Paperback edition published by Norton in 1975, ISBN 978-0-393-00752-7

Toward the end of 1927, the curious economic-social compromise known in the USSR as NEP entered a period of crisis. The state sector was still small and it faced a vast, though fragmented, private sector which dominated agriculture. Len had expected this compromise to last a long time, Bukharin believed that it could and should continue, but Stalin decided to end it. However, at the outset he had no alternative policy, and he searched feverishly for a solution during two critical years of growing tension, finally deciding at the end of 1929 in favor of the policy of total collectivization and extremely rapid industrialization.

It is this dramatic and decisive period that forms the subject of this book. For the first time in the history of Western literature, these years are examined in depth. The study centers around two focal points: the Soviet regime and the peasantry. The complex interrelationship between those two vital factors was a principal concern of Soviet politics from the first days of the revolution. The work analyzes the social, political, economic, and ideological problems of a society in the throes of a great transformation, and every effort is made to see these questions not only from the urban, or politician’s, point of view, but also from the standpoint of the peasant. This not easy since the peasant leaves few written documents for historians to study; such materials are usually the work of townsmen and officials. Dr. Lewin, however, was able to supplement his extensive studies by his own personal experience. He lived in the USSR from 1940 to 1946, working in many collective farms and elsewhere alongside hundreds of peasants, a mere dozen or so years after the events described which adds greatly to the value of his presentation.

This work should interest not only the Russian specialist, but also anyone who wants to understand the great events of contemporary history.

Dr. Moshe Lewin, during his stay in Russia, worked in kolkhozy, iron-ore mines, and metallurgic plants in the Urals, and also served in the Soviet army. After the Second World War he lived in Poland, France, and Israel. He studied economics at the Tel-Aviv High School of Economics, and philosophy, history, and literature at Tel-Aviv University. He took his doctorate in history at the Sorbonne and was Directeur d’études suppléant at the Ecole Pratique des Hautes Etudes in Paris. At present he is Senior Fellow at the Russian Institute. Columbia University. 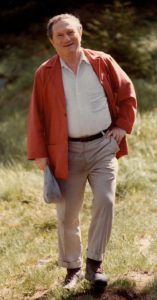 Moshe Lewin pictured in the 1980s

Moshe Lewin was born in 1921 in Wilno, Poland (now Vilnius, Lithuania), the son of ethnic Jewish parents who died in the Holocaust. He lived in Poland for the first 20 years of his life, fleeing to the Soviet Union in June 1941 just ahead of the invading Nazi army. For the next two years, Lewin worked as a collective farm worker and as a blast furnace operator in a metallurgical factory.

In the summer of 1943, Lewin enlisted in the Soviet army. He was sent to officers’ training school and was promoted on the last day of the war.

In 1946, Lewin returned to Poland before emigrating to France. A believer in Labor Zionism from his youth, in 1951 Lewin emigrated again, this time to Israel, where he worked for a time on a kibbutz and as a journalist before eventually returning to school. Lewin received his Bachelor of Arts from Tel Aviv University, in Israel in 1961. That same year, he received a research scholarship to study at the Sorbonne in Paris, where he studied the collectivization of Soviet agriculture. In 1964, Lewin was awarded his Ph.D from the Sorbonne.