March 11, 2016
Video interview, in English, on Rt.com, March 11, 2016 with Konstantin Dolgov, Russian Foreign Ministry ombudsman for human rights, democracy and the rule-of-law. Click on weblink or on screen below. Also, this introductory report on TASS : 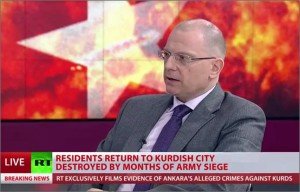 MOSCOW – The growing number of human rights violations in Turkey have gone unnoticed by the European Union and the better half of the world community, Konstantin Dolgov, the Russian Foreign Ministry ombudsman for human rights, democracy and the rule-of-law, told the RT channel on March 11, 2016.

He regretted that Ankara was pursuing a policy which contradicted Turkey’s international commitments to protect human rights.

According to Dolgov, the Turkish authorities have been carrying out a military operation against the Kurds and violating international commitments (eg, on freedom of speech and media) for several months or years by now.

It is an important question as to why the international community is not reacting to these facts, including the mute reaction of the European Union, which is usually much tougher when it comes to other countries, the ombudsman said.

Watch the interview, in English, with Konstantin Dolgov of the Foreign Ministry of the Russian Federation, on RT.com, March 11, 2016: