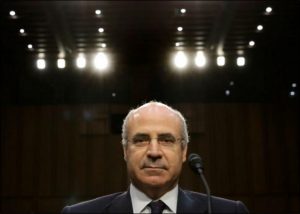 Browder, head of investment fund Hermitage Capital Management, led a campaign to expose corruption and punish Russian officials he blames for the 2009 death of Sergei Magnitsky, who he employed as a lawyer, in a Moscow prison.

Magnitsky was arrested in 2008 shortly after alleging that Russian officials were involved in large-scale tax fraud. His death nearly a year later while awaiting trial caused an international uproar.

Magnitsky had said he was mistreated in jail and denied medical care in an effort to get him to confess to tax evasion and give evidence against Browder.

Browder, who has dismissed the allegations against him, said on Twitter on Friday the ruling was President Vladimir Putin’s reaction to his efforts to get five countries, including the United States [and Canada in October 2017], to impose so-called Magnitsky sanctions against Russian individuals.

The U.S. Treasury Department imposed its sanctions, which freeze the banks accounts of those targeted, under a 2012 law known as the Magnitsky Act. The act imposed visa bans and asset freezes on Russian officials linked to the death of Magnitsky.

“Putin is so mad at me,” Browder, whose fund specialized in investing in Russia, tweeted.

The Russian Prosecutor General’s office said in a statement that the tax evasion by Browder and co-defendant Ivan Cherkasov had caused some 3.4 billion rubles ($58.76 million) in damage to the Russian federal budget.

In addition to nine years in jail, Browder was also fined 200,000 rubles ($3,500) and barred from doing business in Russia for three years, the Prosecutor General’s Office said. Cherkasov was sentenced to eight years in prison.

Browder was also sentenced to nine years in jail in 2013 after having been tried along with the late Magnitsky, who was posthumously found guilty of tax evasion.

At the time, Interpol refused to include Browder on its international search list after deciding that the tax evasion case against him was “of a predominantly political nature”.

Putin has dismissed allegations of foul play against Magnitsky and said he died of heart failure.

Note by New Cold War.org:
Western media reports of the escapades of financier Bill Browder omit two facts about his past record. One, he was one of the most active international financiers in Russia proper during the ‘cowboy capitalist’ decade of the 1990s when large amounts of previous, state-owned enterprises from the years of the Soviet Union were privatized for a song. Two, Browder renounced his U.S. citizenship in 1998 and took up UK citizenship in order to benefit from more generous corporate taxation laws in the UK. Wikipedia explains, “[Browder] gave up his U.S. citizenship in 1998 to avoid paying taxes related to foreign investment.”]