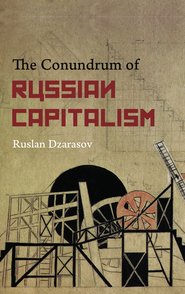 The Conundrum of Russian Capitalism looks at the nature of Russian capitalism following the fall of the Soviet Union, showing how the system originated in the degenerated Soviet bureaucracy and the pressures of global capital. Ruslan Dzarasov provides a detailed analysis of Russian corporate governance, labour practices and investment strategies.

By comparing the practices of Russian companies to the typical models of corporate governance and investment behaviour of big firms in the West, Dzarasov sheds light on the relationship between the core and periphery of the capitalist world-system.

Ruslan Dzarasov is a senior research fellow at the Central Institute of Economics and Mathematics of the Russian Academy of Sciences. He has written for the academic journals Debatte: Journal of Contemporary Central and Eastern Europe and the Cambridge Journal of Economics.