Russian and Crimean architects: ‘We were plugged into the Matrix and now we are slowly exiting it’

Interview with Alexei Komov and Nikolai Vasiliev, curators of the Crimea pavilion at the annual Zodchestvo International Festival of Architecture and Design in Moscow. By Vera Graziadei, published on her website, Dec. 27, 2014 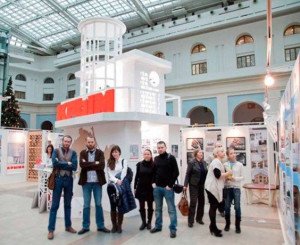 This year was special not only because the festival was dedicated to the 100th Anniversary of the Russian Avante-Gard but also because it had a newcomer – Crimea. The little peninsula, which this year voted in a controversial referendum to be independent  from Ukraine and then to be re-united with Russia, was represented at the festival as a ‘special project’, curated by Alexei Komov and Nikolai Vasiliev. I caught up with them both to talk about the significance of the presence of their Pavilion at the festival, how they see Crimea’s further development and the effect of sanctions.

The Crimean Architecture pavilion is divided into three interlinking parts, dedicated to the last 100 years of development. ‘Master’ examines the history of the pre-war soviet architecture by Boris Belozerskiy. ‘Environment’ presents a retrospective of Soviet resort architecture from the 1920s to 1980s. And the last part, ‘Panorama’, shows the most representative buildings and projects of the last five years.

Vera Graziadei: Alexei, please tell me about your Pavilion and its goals.

Alexei Komov: Our exhibition is not about mega-projects, not about Kerch bridge that will connect Russia and Crimea, not about projects for projects sake, but it’s an exhibition about heritage and resources – natural and human, the authors of which are people, past and present, and the goal of our stand is to represent the Crimean Architecture School, which exists on this ice floe that finally sailed back to us. We wanted to show that Crimean development should rely on the professionals who already exist in Crimea and we want to establish a communication link between these people and the Russian establishment. Also, we wanted to expose the history of Crimean architecture, that there is not only the Swallow’s nest, but also Sanatorium Jubilee in [the city of] Evpatoriya, for example.

Unlike regional stands, the content of which was ultimately decided by regional administrations and governments, we had full freedom of deciding what to include. For the ‘Panorama’, we could have just chosen projects which seemed most striking to us. However, we took a different path – we delegated the selection of projects to The Union of Young Architects and the Union of Architects of Crimea, thereby giving Crimean Architects a chance of identifying themselves rather than having Moscovites doing it for them. We wanted the Crimean Atlantes, which have been sleeping for a long time, to wake up and identify themselves.

Crimeans started a process by voting in the referendum, but what they need to do next is less clear to them. They need ideas for development, which is why I’m going to Crimea as a Chief Architect of Evpatoriya – in order to re-start and fine-tune their cogwheels, which have been buried in moss for many years and which now need to be dug out and cleaned – reminded how they used to be a part of a larger mechanism. I often say that many Crimeans are watching a film about life through their windows, instead of living it. For example, many Evpatorya inhabitants’ perception of their city doesn’t extend beyond their own backyard, which every summer fills up with tourists, like herrings in a can. Beyond their gate – there is space, which has to be managed by Martians, who will fly in to build them a bridge, etc. People, who are watching life through a window are not part of a civic society, so our developmental projects are also concerned with coordinating people into socially cohesive groups.

Another goal is setting a direction for the development of culture and fighting corruption. During Soviet times, Crimea used to be on a much higher level. There were sanatoriums, with their cultural and health programmes, but in the last 23 years Crimean culture has fallen. It is petty salesmen who are providing the entertainment. They make direct profit from satisfying people’s animalistic reflexes – they sell shashlyk and “Crimea is Ours” t-shirts, play loud music, while providing billiard tables, in short, they offer, what I call ‘cattle-vacation’ (bidlo-otdih). Unlike Evpatoriya’s inhabitants, these guys have a very strong sense of community, they are self-organised and, as far as they are concerned, the city is theirs. These small mercenaries are unprincipled, they forgot how to follow laws and they operate on the basis of nepotism and corruption, of a level even unimaginable to Russians, who have seen their fair share of corruption. These people are not so enthusiastic about re-joining Russia and they will resist any changes. It will be difficult to re-organise these people and penalties will be necessary to encourage them to obey laws.

Nikolai Vasiliev: The problem is not only corruption, but also an attitude and belief that without these informal relationships nothing can be achieved. There is a whole generation which has seen people arriving from Kiev, Dnepropetrovsk or Moscow who have just been grabbing the land for building something for themselves. Nothing was done for Crimeans and with Crimeans, not to mention by Crimean themselves. So now they have lost belief that they can do something by themselves without external help.

VG: Could you tell me more about developmental projects in Crimea and whether sanctions will have an effect on them.

AK: Different cities and towns around Crimea have different programmes. At the moment, Evpatoriya is popular, not only because of us, but also because of plans for the new airport and new university, as Sevastopol and Simferopol are too overcrowded and have nowhere to develop. Also development of a “Silicon Valley” is planned somewhere in the triangle between Evpatoriya, Simferopol and Sevastopol. By the way, some U.S. IT specialists will be taking part in it, irrespective of sanctions.

Evpatoriya is not just a tourist zone, it has so much potential. There was a factory called Vimpel, which used to produce one of the first soviet electronic games called Nu pogodi!, where a wolf was catching eggs. It’s a huge brand, which could attract a whole festival of video gamers. This could tie in to the development of ‘Silicon Valley’ – you could say it started with the Vimpel factory. Then there’s a large aviation-repair factory and Space Centre, which has been shut to the public, but needs to re-open. Finally, Evpatoriya is a Little Jerusalem, where all religions co-exist, where children celebrate every day holidays of different religions – Muslims, Karaims, Dervishes, Christians, Jews. This is a city of the future.

Federal money which is now given to the development of Crimea is not simply for building some projects there, but also to start off mechanisms of self-sufficiency. Sanctions will not change anything. On the contrary, sanctions will help us achieve this goal, as people will wake up and start thinking of alternative ways of making money, aside from just hiring out their homes to tourists. It’s a real problem that many Crimeans’ official jobs get a meagre salary after years of work, but they receive their real income from hiring their property, often unofficially. We need to change this situation, we need to create manufacturing, which will be profitable and image-making for Crimea and Evpatoriya.

Crimea was under Ukraine for 23 years. If you take the history of the Soviet Union – so much has happened, lets say, between 1917 and 1940 – so much was built, so many styles were developed, so many events have happened. In this last period in Crimea, there was a complete stagnation. One of the strongest impressions I ever got was when I visited a museum of Uralmash factory, in what used to be Sverdlovsk, or present-day Ekaterinburg. In the late 20s – early 30s there was a period of industrialisation. Within four years, people built not only a town, but this huge factory in the middle of a forest. A full cycle factory – where a wagon with iron ore comes in at one end and a tractor comes out of the other end. All of this happened during the time, when Trotsky said, “We are a country surrounded by enemies, we need to develop from the inside.” Sanctions for us are heavenly grace, as they will encourage us to do just that.

Evpatoriya’s architecture boom happened in 1914, at the beginning of the first world war, when all the health resorts in Europe closed down. People paid attention to themselves and started investing money not abroad but into their own country, developing their own resources. All of the later health resorts that were built, like Druzhba, were only possible in a large Soviet country like the USSR, closed from everyone else, without all the Sharm-el-Sheikhs. Soviet people used to go only to Crimea or Yurmala. My grandfather never left the country, but he was a happy person. An absolutely happy person.

Objectively speaking, Western sanctions have a very positive effect on our country and on Crimea. We were plugged into the Matrix and now we are slowly exiting it – it’s painful, it’s unpleasant, but it’s inevitable. We need to start developing manufacturing and IT. New industrialisation needs to happen, as well as the development of new tourism. We have so many amazing beautiful places that need to be developed – Baikal, Kamchatka, Great Novgorod, Kubachi, Krasnoyarsk, Angara, Tyanshan, Volga, Yaroslavl, the Arctic Circle.

We should stop putting on make-up to make someone else like us and start growing from within, spiritually. The ultimate nightmare of ‘anti-Russian liberals’ is that the reds will make a pact with the whites – if fans of pre-1917 Russia will join forces with fans of post-revolutionary Russia – because both of these groups love their country, they are all patriots. Then, when the metaphorical civil war between them will end, we will finally start dealing with ourselves and developing our own country.