A Russian NGO dealing with consumer rights has been slammed by President Vladimir Putin and may face criminal charges for a tourism memo that urged Russian vacationers to show caution when traveling to “occupied” Crimea, and advising them to request permission from Ukrainian authorities to visit the peninsula, which Moscow annexed last year. 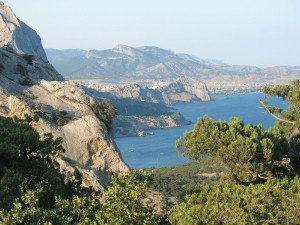 The Society for Consumer Rights Protection memo warned Russians that “under international law,” Crimea remains part of Ukraine, and urged tourists to follow a set of precautions when visiting the “occupied territory” and to obey Ukrainian laws. “Ukrainian law envisages a procedure for entering and leaving the occupied territory, and tourists who violate it may be subject to criminal responsibility, up to a prison term,” the memo read. “Out of consideration for their own security, tourists are advised to observe Ukrainian laws and cross the border only with the permission of Ukraine’s border service in the Kherson region.”

If any problems with Ukrainian authorities appear, Russian travelers may demand their money back from tour operators for having failed to warn them about the “possible risks of being on an occupied territory,” the memo said.

Putin condemned the NGO over the memo Tuesday, saying the organization was acting in the interests of foreign states over those of Russia. “Is this [giving recommendations to our tourists on how to behave in Crimea] looking out for Russian nationals? No, it’s serving the interests of foreign states,” the president was cited as saying by Interfax at a meeting of the Public Chamber.

“It was precisely because of this that the ‘foreign agent’ concept was introduced — so that foreign states should not be able to use such instruments to interfere in our internal politics,” he said.

Under Russian law, NGOs that engage in loosely defined political activity and that receive foreign funding are obliged to register as “foreign agents.”

The Prosecutor General’s Office said the memo “contains appeals for abetting the activities of a foreign state, international organization or their representatives, aimed at violating the territorial integrity of the Russian Federation,” according to a statement released Monday. The case has been sent to investigators to determine whether criminal charges should be brought, the statement said. The section of the Russian law cited in the statement as the grounds for possible criminal charges allows for punishments that can range from community service to five years in prison.

While the warning reportedly caused Russian vacationers to call travel agencies with questions about the potential hazards of Crimean travel, the government’s media watchdog Roskomnadzor received orders from the Prosecutor General’s Office to block the consumer protection agency’s website, Interfax reported. The NGO’s website was unavailable Tuesday, revealing only a message saying access had been limited “by the decision of Russian authorities.”

Putin’s spokesman Dmitry Peskov called the memo “absurd,” since “Crimea, as is well known, is a region of the Russian Federation,” news agency Interfax reported. Peskov declined, however, to comment on the memo’s suggestion that Russian travelers should go through official Ukrainian routes to Crimea, saying that “recommendations on the choice of travel itineraries is outside the Kremlin’s jurisdiction,” according to the report.

Most countries and major international organizations consider Crimea part of Ukraine, but Moscow insists that the peninsula’s “reunification” with Russia was legitimate, and has recently denounced the United Nation’s nuclear watchdog, the Vienna-based International Atomic Energy Agency, for listing in its annual report a nuclear site near Crimea’s Sevastopol as being in Ukraine.

Amid Western sanctions imposed against Moscow for annexing Crimea and amid Russia’s economic downturn, foreign travel has become too expensive for many Russians, while the government has also been urging citizens to spend holidays on the peninsula.

After the memo came out, “clients have been calling tour operators since 9 a.m., expressing complaints, fearing to go on vacations,” Tyurina was quoted by Interfax as saying. “Considering that Crimea is not the most popular domestic travel destination among Russians, this notice has stoked panic.”

She also said that the consumer rights group had no business warning Russians about criminal charges they supposedly may face for violating Ukrainian border laws, Interfax reported. “Russian tourists will not have any problems with entering Crimea,” Tyurina was quoted as saying, adding that travel warnings were a task for the Foreign Ministry and other government agencies, and “none of them have made statements like that.” \