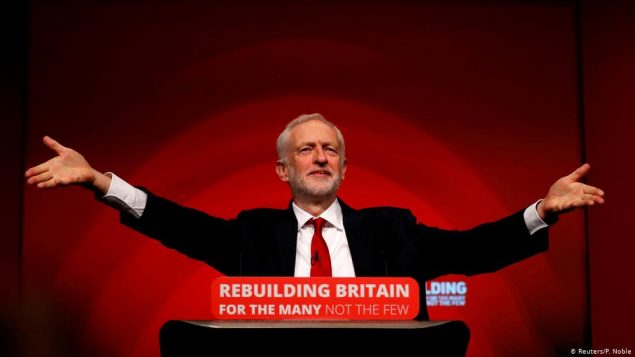 Days before Britain’s historic election, the UK’s military-intelligence apparatus is turning to the corporate media and US government-funded NATO cut-outs to smear Labour leader Jeremy Corbyn with evidence-free Russiagate allegations.

By Ben Norton and Max Blumenthal

The popular socialist leader of Britain’s Labour Party, Jeremy Corbyn, could be on the verge of becoming prime minister of the United Kingdom. And the mere possibility is terrifying British intelligence services and the US government.

Since Corbyn was elected to the head of the Labour Party in 2015, in a landslide victory after running on a staunch leftist and anti-war platform, the corporate media has waged a relentless campaign to demonize and delegitimize him.

With just days remaining before UK’s national election on December 12, British intelligence agencies and US government-backed organizations have escalated their attacks on Corbyn, borrowing tactics from America’s Russiagate hysteria and going to great efforts to portray him — without any substantive evidence — as a supposed puppet of the dastardly Kremlin.

These government-sponsored attacks on Corbyn, a lifelong anti-imperialist and former chair of the Stop the War Coalition, are far from new. In December, The Grayzone reported on the Integrity Initiative, a UK government-funded secret network of spies, journalists, and think tanks that rehabilitated Cold War-era information warfare to demonize Corbyn and smear anti-war leftists as Vladimir Putin’s unwitting foot soldiers.

But as polls show more and more popular enthusiasm for Labour and its socialist program on the eve of the vote, and as the prospects of a Corbyn-led government become increasingly plausible, Western government spooks have rapidly laundered avalanches of disinformation through the press, desperately trying to undermine the party’s electoral efforts.

Dozens of misleading hit pieces are circulating in the press that treat PSYOP specialists and regime-change lobby groups funded to the hilt by Washington, NATO, and the weapons industry as trustworthy and impartial.

British journalist Matt Kennard has documented at least 34 major media stories that rely on officials from the UK military and intelligence agencies in order to depict Corbyn as a threat to national security.

A powerful trans-Atlantic disinformation network sponsored by NATO-related entities and dedicated to spreading fear about Russian meddling has set its sights on the leftist Labour leader.

On November 27, the Jeremy Corbyn campaign revealed a 451-page dossier containing details of secret negotiations between the UK’s Conservative government and the US to privatize Britain’s National Health Service (NHS) as part of the Brexit deal. The explosive revelation put the lie to Prime Minister Boris Johnson’s promise that the NHS was not up for negotiation.

Less than a week later, a peculiar story dropped in the British media. A December 2 headline in the pro-Tory Telegraph blared that the NHS dossier deployed by Corbyn “points to Russia.” The liberal Guardian published a similar report asserting that the leaked papers had been “put online by posters using Russian methods.” And the story gravitated across the Atlantic thanks to the neoconservative Daily Beast tabloid.

In every case, the media relied on a single source to link the NHS dossier – and Corbyn himself – to Russian interference: a supposed data consulting firm called Graphika, and its director, supposed “information expert” Ben Nimmo.

Assuring the public that the leak of the documents “closely resembles… a known Russian operation,” Nimmo simultaneously conceded that “we do not have all the data that allows us to make a final determination in this case.” 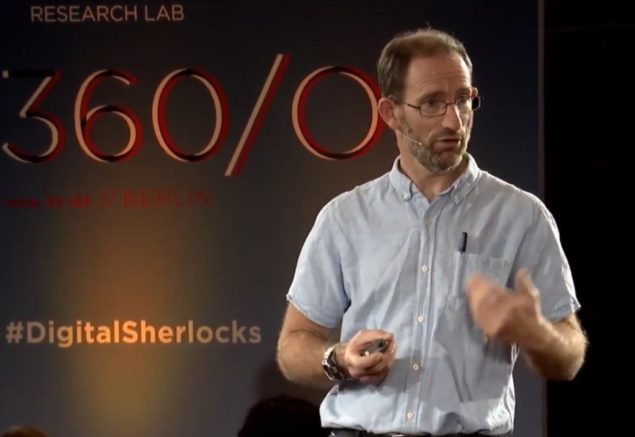 Not one outlet covering story bothered to inform readers who Nimmo was, or offered any detail on the powerful state forces behind Graphika.

In fact, Nimmo is not a data expert or a journalist, but a former NATO press officer who previously consulted for the covert Integrity Initiative propaganda farm, which was funded by the UK Foreign Office and dedicated to spawning conflict with Russia.

Turns out @benimmo – the guy who habitually identifies real people as Russian bots – is a former travel & fantasy fiction writer with no journalistic or security expertise. And he works for a military-intelligence front that has a special relationship with certain media outlets. https://t.co/mXwxE6IRKD

Nimmo put his lack of journalistic precision on display when he launched a bungled 2018 witch-hunt against Twitter users whose postings diverged from the NATO line, branding several real live humans as Russian bots.

This April, Nimmo was hired as Director of Investigations by Graphika. Humbly describing itself as “the best in the world at analyzing how online social networks form, evolve, and are manipulated,” Graphika’s partners include the Defense Advanced Research Projects Agency (DARPA), the Pentagon’s Minerva Initiative, the Senate Select Intelligence Committee, and the Syria Campaign – the billionaire-funded public relations arm of the Syrian White Helmets. 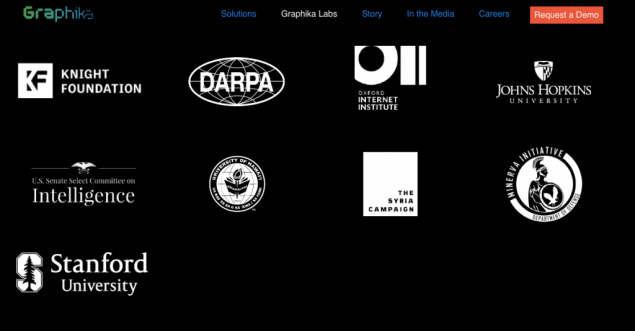 As The Grayzone has reported, the Atlantic Council is a corruption-stained money dump for Ukrainian and Middle Eastern oligarchs, as well as Gulf monarchies, the arms industry, the British Foreign Office and the US State Department.

Its DFRLab was enlisted by Facebook to “identify, expose, and explain disinformation during elections around the world,” and subsequently received $1 million from Mark Zuckerberg’s social media empire to carry out its work.

Last October, with guidance from Nimmo and the Atlantic Council’s DFRLab, Facebook and Twitter deleted the accounts of hundreds of users, including many alternative media outlets maintained by American citizens.

Among those targeted in the coordinated purge were popular alternative news sites that scrutinized police brutality and militarism, along with the pages of professional journalists.

Now, in the UK, the Atlantic Council is injecting itself into a national election campaign, exploiting an atmosphere of Russia hysteria that its self-styled “information experts” have helped to stoke.

On December 6, Reddit announced that its platform had been used by “suspected” Russian actors to publish the scandalous NHS dossier that become a centerpiece of Corbyn’s campaign against Johnson. As usual, the primary source for Reddit’s claim was the Atlantic Council, which it credited with “provid[ing] us with important attribution.”

Reddit’s Director of Policy, Jessica Ashooh, is the Atlantic Council’s former Middle East Strategy Task Force Deputy Director, and an ex-official of the government of the United Arab Emirates. She was hired by the social media giant in 2017, at around the same time that Senate Select Intelligence Committee co-chair Sen. Mark Warner was demanding more government control over Reddit on the grounds that it was a potential vehicle for Russian influence.

Reddit’s lone source on this claim is the NATO/US/Burisma/arms industry-funded Atlantic Council.

In a 2016 column for Foreign Policy, Ashooh likened Donald Trump to self-proclaimed ISIS Caliph Abu Bakr al-Baghdadi and appeared to lament that “drone strikes on Trump Tower are probably not coming any time soon.”

She complained that Trump was “giving voice to troubling narratives of marginalization and disenchantment with the status quo,” and chided the “elite class” for underestimating him.

Those same elite grievances have animated the campaign to destroy Corbyn, a left-wing populist whose political views are alternately opposed to Trump’s. And the same cynical tactics honed in the paranoid passion play of Russiagate have been redeployed against the Labour leader.

In the most recent intelligence-backed assault on Corbyn, corporate media outlets have even relied on Nazis and neo-fascist blogs as sources.

One of the most shockingly dishonest smears of Jeremy Corbyn was published in the British tabloid The Sun on December 7.

The piece uncritically echoes the opinions of a right-wing lobby group called Hijacked Labour, which was founded by former military intelligence officers with the express goal of ousting Corbyn and purging the Labour Party’s anti-imperialist faction.

In lieu of any actual evidence, the report relied on a graphical web created by these conservative disgruntled ex-spies, which attempts to link Corbyn to terrorism through many degrees of separation — and cites neo-Nazis to do so.

The conspiratorial web does not show any tangible ties between these figures, and impugns Corbyn with vague far-right buzzwords like “global Marxism” and “postmodern neo-Marxism.” The latter term is a non-existent and paradoxical concoction of ultra-conservative pundit Jordan Peterson, based on the fascist anti-Semitic myth of “Cultural Marxism,” which is itself rooted in Nazi Germany’s propaganda on “Cultural Bolshevism.”

In fact, the Hijacked Labour website directly references the right-wing pundit, recommending a Jordan Peterson lecture titled “Postmodernism and Cultural Marxism.” The Peterson screed was published by The Epoch Times, a right-wing media outfit run by the fascist Chinese cult Falun Gong, which maintains that science and race-mixing are demonic and insists Donald Trump was sent by God to destroy the Communist Party of China.

The anti-Corbyn group of British spooks also implored readers to watch a video by Thomas DiLorenzo, a right-wing neoliberal economist at the libertarian Mises Institute, which Hijacked Labour claims “works against the deconstructive and destructive effects of Cultural Marxism.”

Given the conspiratorial web’s reliance on far-right terminology, it might not have been a surprise that it also cited literal Nazis as a source.

Critics on Twitter quickly pointed out that the Hijacked Labour website used by the British media to attack Corbyn cited a neo-Nazi website called Aryan Unity.

Nice to see “Aryan Unity” quoted as a source, lads. But what now of Searchlight’s own well established links with spooks? pic.twitter.com/RGCqG23DhG

Together with this white supremacist page, the former British military intelligence officers cited a critique of antifascists published by the far-right website The Millennium Report. This blog has run blatantly anti-Semitic posts with titles like, “Why are the Jews so reviled worldwide? Have they brought this judgment on themselves?”, “New World Order Pledged To Jews,” and “This is how the ‘Court Jews’ have been strategically placed into power families over millennia.”

The Sun has published a network map of "hard-left extremists" in the Labour Party, made by "former British intelligence officers". Its sources include the neo-Nazi website Aryan Unity (h/t @johnedenuk) and the antisemitic conspiracy site The Millennium Report. pic.twitter.com/wUnBIyNfvt

After facing backlash on social media, The Sun article was removed from the website. And the new URL for the post includes the term “legal-removal,” suggesting that the publication may have been threatened with legal action for publishing the absurd story.

This is shocking. The Sun publish a far-right conspiracy theory put together by neo-nazis only to pull it after people online expose it for what it is. https://t.co/13DT9Soixm

But this was far from the only corporate media attack on Corbyn that relied on military intelligence apparatus as a source.

British journalist Mark Curtis has expanded his colleague Matt Kennard’s tally and shown that some 40 media stories have been published in major corporate media outlets smearing Jeremy Corbyn with the unsubstantiated claims of British spies.

Another story of "ex-military veterans in their spare time" led by "ex-SAS officer" demonising Corbyn as threat to UK, by the hilarious T.Newton-Dunn in the S*n. @DCKennard & @DeclassifiedUK just documented 34 similar media stories: it's now closer to 40. https://t.co/XATlZIX3d2

The UK’s military intelligence apparatus has demonstrated a striking ability to influence the mainstream media, stirring pseudo-scandals almost every week. Desperate to prevent the election of the first authentically left-wing British prime minister, it is no longer disguising its role in the assault on Corbyn.

But there is one weapon Corbyn boasts that this unelected, opaque element can only hope for: the hearts and minds of masses of British people. And this December 12, the people get to decide.