Russia to spend over $800 million on electricity cable to Crimea 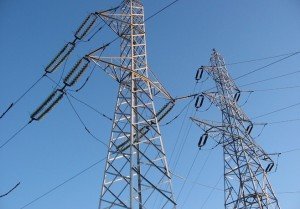 Russia’s Energy Ministry has signed a contract worth up to 47.3 billion rubles ($830 million) for the construction of energy infrastructure to Crimea as Russia strives to end the peninsula’s dependence on Ukrainian supplies, a tender published online showed.

An electricity cable will be laid along the bottom of the Kerch Strait to connect Crimea with Russia’s southern Krasnodar region. The construction is to be completed by Dec. 25, 2020, according to the tender published late Thursday on the Russian government’s official procurement website.

The state-run Russian Energy Agency will function as the client on the contract. The tender did not say what company would carry out the building work. 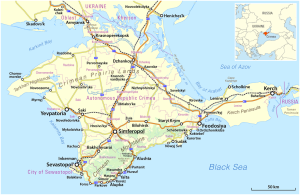 Map of Crimea shows Kerch Strait and Russia on the right. Black dotted lines are railway routes, the Kerch Strait crossing is a ferry

Although Russia annexed Crimea from Ukraine in March of last year, the peninsula is still 70 percent dependent on energy supplies from Ukraine, news agency RIA Novosti reported. According to the Vedomosti newspaper, at peak hours this figure can reach 90 percent.

The Russian authorities last year announced a plan for developing the Crimean energy industry, including the construction of the electricity cable under the Kerch Strait and power plants on the peninsula.

Valentina Matviyenko, the speaker of Russia’s upper house of parliament, wrote in a post published on her official blog Friday that it will take two to three years to develop the infrastructure needed to reliably supply Crimea with water and electricity. 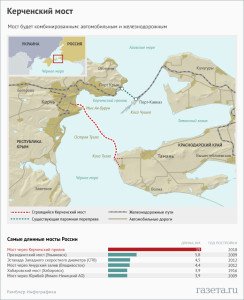 Construction of the energy infrastructure comes as part of Russia’s program for developing the peninsula through 2020, for which a total of 736 billion rubles ($13 billion) are to be allocated from the federal budget, the TASS news agency reported.

Moscow is also funding construction of a $4 billion road and rail bridge to Crimea across the 3 kilometer-wide Kerch Strait. The peninsula currently has no overland connection to mainland Russia, complicating travel and supply of goods and materials.

‘More crucially for the residents of Crimea, the government of Ukraine is also imposing tough punitive measures on its lost province, cutting off some transportation links, water, and power. A new draft bill being debated in the Ukrainian Parliament (Verkhovna Rada) proposes turning this into a total blockade.’

And in The Moscow Times:

Isolated Crimea to get second airport as Russia seeks to boost ties, July 13, 2015

Update: TASS reports on August 6, 2015 that the first two of four electricity cables that will transmit 400 megawatts daily from the Krasnodar region of Russia to Crimea under the Kerch Strait will be operational in late December 2015. Crimea’s typical energy usage daily is 1200 MW.