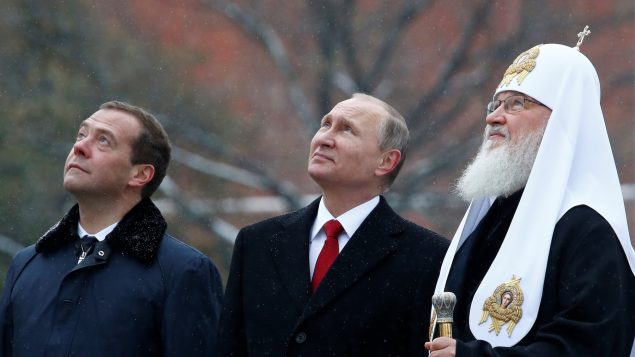 This article provides a critical look at the situation inside Russia from the Russian perspective.

Russia is in a complicated political and economic situation. Smoldering conflicts near its borders and the continued pressure from the US and NATO affect the situation in the country negatively. It is possible to observe the decreasing approval rating of the Russian government and President Vladimir Putin, in particular. However, this very tendency is not linked to the foreign policy course of the Kremlin. It’s the result of the recent series of ill-considered liberal-minded economic reforms, which look similar to the economic course undertaken by the Russian government in mid-1990s. For example:

Additionally, the population is facing an increasingly restrictive administrative pressure faced by the population: new fines and other penalties for minor violations in various fields and additional administrative restrictions limiting the freedom of actions of citizens. The traffic management of big cities and federal highways as well as policies employed towards small business and self-employed persons are among the most obvious examples.

In fact, the general population has no effective levers of pressure to impact the government policy. The public political sphere is turned into a desert. The United Russia (Edinaya Rossiya) is the only political pseudo-party, which still de—facto exists in the public politics. Nonetheless, its ideological and organization capabilities are exhausted. Other “political parties and organizations” are just media constructs designed to defend interests of a narrow group of their sponsors. It is hard to find a lawmaker in the State Duma and the Federation Council, who would not be affiliated with the established political elite or oligarchs.

In the media sphere, the government failed to explain its current course to the population. A vast majority of initiatives of Dmitry Medvedev’s cabinet faces a negative reaction among the population. A spate of scandals (example) involving high and middle level government officials made the situation even worse. They publicly revealed blatant hypocrisy, neglectful attitude to duties of some Russian officials. In the period from 2018 to 2019, there were multiple arrests of officials caught exceeding of the limits of authority and being involved in corruption schemes. In comparison to the previous periods, this number increased by 1.5-2 times. However, this does not help to change the established media situation.

The aforementioned factors fuel the negative perception of the Medvedev government, and thus Vladimir Putin as the head of state, among the Russian citizens.

The situation is also complicated in the foreign policy field. In fact, the Kremlin failed to exploit opportunities to expand its influence, which it got after the reunification of Russia with Crimea. In fact, by February 2019, the Russian policy towards eastern Ukraine has been ill-defined. At the same time, Moscow continues to lose its influence in post-Soviet states. This can be observed in both the Caucasus and Central Asia. Even, the close ally, Belarus, occasionally demonstrates unfriendly behavior and focuses own efforts on the exploitation of economic preferences granted by Russia.

Evaluating the current internal political situation in Russia and its foreign policy course, it’s possible to say that the Russian leadership has lost the clear vision of the national development and the consistent stiff policy, which are needed for any great power. Another explanation of this situation is that the Russian leadership is facing pressure from multiple agents of influence, which stand against ideas of the powerful independent state seeking to act as one of the centers of power on the global stage. One more factor, often pointed out by experts, is the closed crony-caste system of elites. This system led to the creation of the leadership, which pursues own economic and security interests only. Apparently, all of these factors influence the Russian foreign and domestic policies in one way or another.

In any case, it is highly likely that Russia will face hard times in the next two years (2019-2020) and face various threats and challenges for its economy, foreign policy course and even the statehood.