MOSCOW–Russia’s defense ministry said on Wednesday it had proof that Turkish President Tayyip Erdogan and his family were benefiting from the illegal smuggling of oil from Islamic State-held territory in Syria and Iraq. 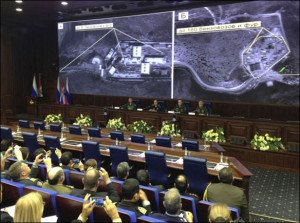 Moscow and Ankara have been locked in a war of words since last week when a Turkish air force jet shot down a Russian warplane near the Syrian-Turkish border, the most serious incident between Russia and a NATO state in half a century.

Erdogan responded by saying no one had the right to “slander” Turkey by accusing it of buying oil from Islamic State, and that he would stand down if such allegations were proven to be true. But speaking during a visit to Qatar, he also said he did not want relations with Moscow to worsen further.

At a briefing in Moscow, defense ministry officials displayed satellite images which they said showed columns of tanker trucks loading with oil at installations controlled by Islamic State in Syria and Iraq, and then crossing the border into neighboring Turkey.

View: A 23-minute video broadcast of the Russian defense ministry press briefing on December 2, with English translation, can be viewed at this weblink.

The officials did not specify what direct evidence they had of the involvement of Erdogan and his family, an allegation that the Turkish president has vehemently denied.

“Turkey is the main consumer of the oil stolen from its rightful owners, Syria and Iraq. According to information we’ve received, the senior political leadership of the country – President Erdogan and his family – are involved in this criminal business,” said Deputy Defence Minister Anatoly Antonov. 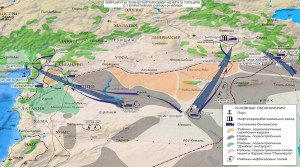 “Maybe I’m being too blunt, but one can only entrust control over this thieving business to one’s closest associates.”

“In the West, no one has asked questions about the fact that the Turkish president’s son heads one of the biggest energy companies, or that his son-in-law has been appointed energy minister. What a marvelous family business!”

“The cynicism of the Turkish leadership knows no limits. Look what they’re doing. They went into someone else’s country, they are robbing it without compunction,” Antonov said.

Erdogan last week denied that Turkey procures oil from anything other than legitimate sources.

The United States said it rejected the premise that the Turkish government was in league with the militants to smuggle oil. “We frankly see no evidence, none, to support such an accusation,” State Department spokesman Mark Toner said.

Erdogan has said Ankara is taking steps to prevent fuel smuggling, and he challenged anyone who accused his government of collaborating with Islamic State to prove their allegations.

On Tuesday, U.S. President Barack Obama said Turkey had made progress in sealing its border with Syria, but Islamic State was still exploiting gaps to bring in foreign fighters and sell oil.

The Russian defense ministry also alleged that the same criminal networks which were smuggling oil into Turkey were also supplying weapons, equipment and training to Islamic State and other Islamist groups.

“According to our reliable intelligence data, Turkey has been carrying out such operations for a long period and on a regular basis. And most importantly, it does not plan to stop them,” Sergei Rudskoy, deputy head of the Russian military’s General Staff, told reporters.

The defense ministry said its surveillance revealed hundreds of tanker trucks gathering at Islamic State-controlled sites in Iraq and Syria to load up with oil, and it questioned why the U.S.-led coalition was not launching more air strikes on them.

“It’s hard not to notice them,” Rudskoy said of the lines of trucks shown on satellite images.

Russian officials said their country’s bombing campaign had made a significant dent in Islamic State’s ability to produce, refine and sell oil.

U.S. officials say coalition air strikes have destroyed hundreds of IS oil trucks while the Russian campaign has mainly targeted opponents of the Syrian government who are not from Islamic State, which is also known as ISIL.

“The irony of the Russians raising this concern is that there’s plenty of evidence to indicate that the largest consumer of ISIL oil is actually Bashar al-Assad and his regime, a regime that only remains in place because it is being propped up by the Russians,” White House spokesman Josh Ernest said.

The State Department’s Toner said U.S. information was that Islamic State was selling oil at the wellheads to middlemen who were involved in smuggling it across the frontier into Turkey.

Russian officials described three main routes by which they said oil and oil products were smuggled from Islamic State territory into Turkey.

The ministry said the Western route took oil produced at fields near the Syrian city of Raqqa to the settlement of Azaz on the border with Turkey.

From there the columns of tanker trucks pass through the Turkish town of Reyhanli, the ministry said, citing what it said were satellite pictures of hundreds of such trucks moving through the border crossing without obstruction.

“There is no inspection of the vehicles carried out … on the Turkish side,” said Rudskoy.

Some of the smuggled cargoes go to the Turkish domestic market, while some is exported via the Turkish Mediterranean ports of Iskenderun and Dortyol, the ministry said.

Another main route for smuggled oil, according to the ministry, runs from Deir Ez-zour in Syria to the Syrian border crossing at Al-Qamishli. It said the trucks then took the crude for refining at the Turkish city of Batman.

A third route took oil from eastern Syria and western Iraq into the south-eastern corner of Turkey, the ministry said.

It said its satellite surveillance had captured hundreds of trucks crossing the border in that area back in the summer, and that since then there had been no reduction in the flow.

The defense ministry officials said the information they released on Wednesday was only part of the evidence they have in their possession, and that they would be releasing further intelligence in the next days and weeks.

Not only was oil smuggled into Turkey by ISIS, but Turkish President Recep Tayyip Erdogan and his family were involved in, and benefited from, jihadist oil networks, Moscow claimed yesterday.

In a serious escalation of deteriorating relations between the countries after Turks shot down a Russian jet, Russian Deputy Defence Minister Anatoly Antonov, claimed that Mr Erdogan, who has denied any knowledge of oil smuggling and promised to resign if the claims are substantiated, was “involved in this criminal business”.

Following a series of increasingly outlandish claims about Isis’s smuggling routes into Turkey, and the often claimed support for Isis along Turkey’s long and porous border with Syria, few were surprised by the claims. But Mr Antonov promised to produce evidence to support the allegation. He said: “Today, we present only part of the facts in our possession, that there is a team of bandits and the Turkish elite working in the region to steal oil from its neighbours.” He told reporters the evidence would be published in “days”.

The minister cited satellite images which, he claimed, showed the three main routes used to transport oil from Isis-controlled areas of Syria: a western route leading to Turkish ports on the Mediterranean; a northern route leading to refineries in Batman; and a third leading to a large transhipment base in the village of Cizre. Some of the images purportedly show vehicles carrying oil products along a road connecting Turkey and Syria. “This oil enters Turkish territory in enormous quantities, on an industrial scale along a living pipeline of oil tankers in their thousands,” said Mr Antonov.

He added: “The cynicism of the Turkish leadership is unlimited. They have entered a foreign country, and are shamelesslyplundering it.And if the leaders interfere, well, they must be removed.”

Mr Erdogan said the Russian claims were outrageous and untrue. Speaking to reporters in Qatar, he added: “Nobody has the right to slander Turkey by saying Turkey is buying Daesh [Isis] oil.”

The Russian claims were viewed as, at best, improbable. But the notion that Turkish “middlemen” have been involved in illegal oil trade which, until Isis supply lines were recently disrupted, had proved lucrative, has been raised in Washington. Turkish authorities have made commitments to tackle smuggling into its territory.

The claims were the latest in a series of tit-for-tat measures. Russia has banned Turkish food imports and yesterday it was reported that Ankara was preparing to cut imports of Russian liquefied petroleum gas by a quarter next year. A source told Reuters: “It may be more expensive, but the process of howto ensure future deliveries from elsewhere is being worked out.”

Russian Foreign Minister Sergei Lavrov has said he is prepared to meet Turkish counterpart Mevlut Cavusoglu in Belgrade this week. Mr Lavrov said he was willing to “hear what Mr Cavusoglu has to say”. Turkey said the downed Russian Su-24 aircraft had intruded into its airspace and ignored repeatedwarnings to leave. Russia denies this.

OlegPeshkov, the pilot killed in the crash, was yesterday buried with military honours, after being posthumously given the country’s highest military award. His navigator survived, but a Russian marine was killed during the rescue mission.

Last night, ISIS released what it claimed is a video of a Russian “spy” being executed in retaliation for Russian Air Force air strikes in Syria.