Precautionary move comes amid military standoff between Pyongyang and U.S., and after Moscow and Washington clashed at the UN over North Korea 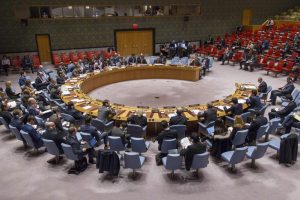 Russia raised the level of alert for its air defense system just a few hours after North Korea test-fired a ballistic missile on Saturday, April 29 and after Washington and Moscow clashed at the United Nations the day before over a possible military conflict on the Korean Peninsula.

The North Korean missile exploded shortly after launch, U.S. and South Korean officials said, in what is the latest in a flurry of tests this year in violation of UN resolutions to try and halt the country’s nuclear weapons program.[1]

“Russia is carefully monitoring what is happening in North Korea and the air defense forces in the Far East are in a status of heightened readiness,” said Viktor Ozerov, chair of the committee for defense and security of the Federation Council (Russia’s upper house) in Moscow. He said that Russia is aware it’s not a target of the missiles, but it will ensure no missile lands on Russian territory. Russia has a short land border with North Korea. 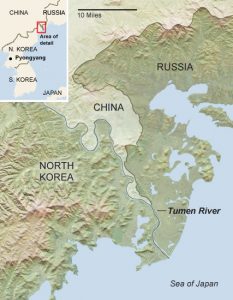 The alert is for air defenses in the city of Khabarovsk, the headquarters of the East Military District, and is precautionary, a source in the district told Asia Times. The area contains batteries of Russia’s S-400 Triumph  long-range anti-missile defenses. While Russia shares a border with North Korea it has never been regarded as a target of the Pyongyang regime, which typically directs its threats of military attack [sic] toward South Korea, Japan and the U.S.

However, the move by Moscow adds to a tense military standoff in northeast Asia a day after Russia clashed with the U.S. at the UN Security Council, warning that a military attack on North Korea would have “catastrophic consequences,” AFP reported. The U.S. this week moved an aircraft carrier, guided missile destroyers and a nuclear powered submarine into waters near the Korean Peninsula and has said its patience with North Korea’s violations of UN sanctions is over. 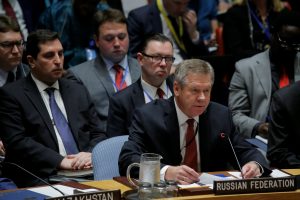 U.S. President Donald Trump this week said a major military conflict with North Korea was possible, though a solution through diplomacy and economic sanctions is being sought

Russia said China’s proposals to restart talks with North Korea should be seriously examined and that sanctions alone would not work.

China’s proposal for a freeze on North Korea’s military programs in exchange for a halt to U.S.-South Korea military drills are “ideas that merit serious attention,” Gatilov said. North Korea “is conducting itself in an inappropriate way,” Gatilov told the council, but “reckless muscle-flexing” over North Korea could lead to “frightening” missteps.

Russia along with China and the U.S. took part in six-party talks on North Korea’s denuclearization from 2003 to 2009, along with Japan, South Korea and the North.

The Security Council was meeting to try to agree on a global response to North Korea that the U.S. maintains must involve China ramping up political and economic pressure on its Pyongyang ally.

Meanwhile, the increased risk of military conflict is having consequences in daily life in northeast Asia. While South Koreans are often reported of having a nonchalance bordering on indifference to North Korea – largely the result having lived with threats from its belligerent neighbor for decades – the government has been offering assurances of calm this week. This is mostly from concern the U.S. might unilaterally and unexpectedly decide to strike the North, just as it did in Syria recently with cruise missiles.

In Japan, after reports came through Saturday that North Korea had launched a missile on Saturday morning, some subways in Tokyo and railways elsewhere halted operations for about ten minutes as a precaution, the Asahi newspaper reported. Japan’s government has also seen a large increase in visitor traffic to its website that gives advice to the public of what to do in the event of a missile attack.

Note by New Cold War.org:
[1] The Western news agencies reporting U.S. and South Korean claims of failure of the missile test by North Korea on April 29, 2017 do not report the North Korean statements on the matter.

… China and Russia both also repeated their opposition to the deployment of a U.S. anti-missile system in South Korea. Gatilov described it as a “destabilizing effort,” while Wang said it damaged trust among the parties on the North Korea issue…

Korean Peninsula: Conflict prevention ‘our collective priority’ but onus also on DPRK, says UN chief, press release by UN News Center, Friday, April 28, 2017   (a weblink to the record of the Security Council meeting of April 28, 2017 discussing the situation on the Korean peninsula will be provided here on New Cold War.org as it becomes available)

A lot of what you know about North Korea is racist nonsense, by Andrew Dobbs, published on Defiant, April 18, 2017  (with extensive, related news reporting by New Cold War.org, updated on May 1, 2017)